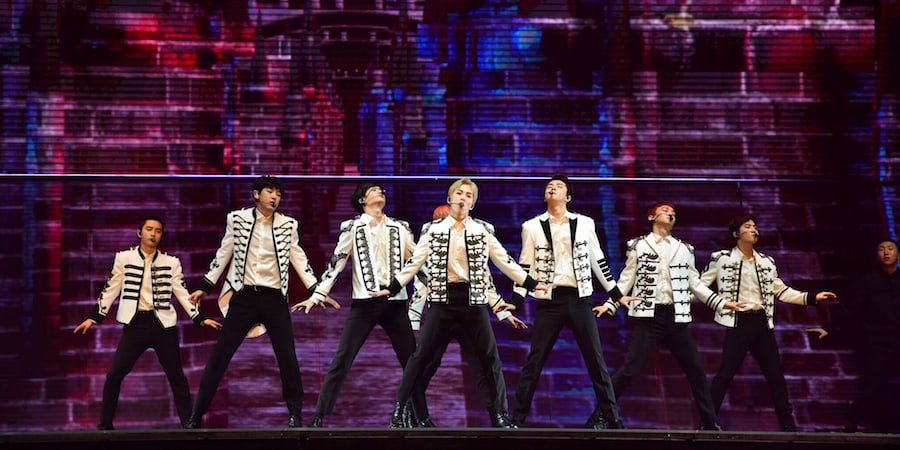 Highlights From EXO PLANET #4 – The EℓyXiOn In Singapore

EXO was in Singapore recently for their EXO PLANET #4 — The EℓyXiOn in Singapore concert! The band was cheered on by a 8,000 strong crowd at the Singapore Indoor Stadium while they performed their many hit songs.

Here were some of the highlights from the concert:

EXO proved their quadruple million sellers status with mesmerizing performances of their chart toppings hits like “Ko Ko Bop” and “Growl,” while pleasing their fans with fan-favorites like “The Eve” and “Touch It.”

On top of their group performances, each member also showcased their talents with solo stages from D.O’s performance of ‘For Life’ in English, which featured Chanyeol playing the piano, to Sehun’s captivating solo dance stage, ‘Go.’

The love between EXO and EXO-L was also shown throughout the concert as EXO interacted with their fans.
Chanyeol Borrowing a Fan’s Phone for Selfies:

awww so lucky!!! Chanyeol took a phone fan again and bring it along into the stage!!! HE LOOK SO EXTRAORDINARY HANDSOME
#iHeartAwards #BestFanArmy #EXOL @weareoneEXO pic.twitter.com/w7WlQ7gRXx

The moment when Baekhyun took the mask and then…

The fans also celebrated Xiumin’s birthday which was in March by singing him a birthday song.

EXO who recently performed at the PyeongChang Winter Olympics Closing Ceremony expressed their gratitude of having a once in a lifetime opportunity to perform at such a big event and also how they were proud to be EXO-L’s pick.

It would not be an EXO concert without the member’s interaction with each other! Check out the members showing off their gold mic stands and Chen joking that they were made of real gold.

The group who had ended the concert with ‘Angel’ promised to be back in Singapore soon and asked fans to anticipate their return. We’ll certainly be looking forward to seeing them again!

Special thanks to Rock Media for the invitation to the EXO PLANET #4 – The EℓyXiOn in Singapore!

EXO
Soompi Spotlight
Soompi Exclusive
How does this article make you feel?