The Most Awkwardly Relatable Show: 6 Reasons To Watch “It’s Dangerous Beyond The Blankets”

Unless you’ve been living under a rock, you know that “It’s Dangerous Beyond the Blankets” is one of the newest and most-anticipated variety shows as of late. Its all-star cast consists of Wanna One’s Kang Daniel, EXO’s Xiumin, Jeong Sewoon, Kim Min Suk, Loco, Lee Yi Kyung, and Jang Ki Ha, making for an exciting lineup. After the success of the pilot episodes this past summer, this show is looking to be very promising. Viewers couldn’t wait to see more of the homebodies’ cute antics, and they have finally gotten their wish. So if you’re not already on board with this show, here are six reasons why you should be watching “It’s Dangerous Beyond the Blankets.”

1. The awkward yet funny interactions

When you put a bunch of homebodies together, their combined awkwardness is enough to fuel the flames of any fan’s heart. Though it is painful at times, most viewers get a kick out of how uncomfortable the cast members appear on screen. At least, I do anyway.

Because the show is filmed with the premise that the cast is living at home, there isn’t always a lot of talking that goes on. But whenever there’s a lull in action, the editing comes in to save the day. The witty observations and remarks that are put in the captions honestly make me laugh by themselves.

We all know that our faves work incredibly hard, so it’s all the more comforting to see them taking it easy for once. They sleep as long as they want, eat well, and do as they please. Ten out of ten, would recommend. 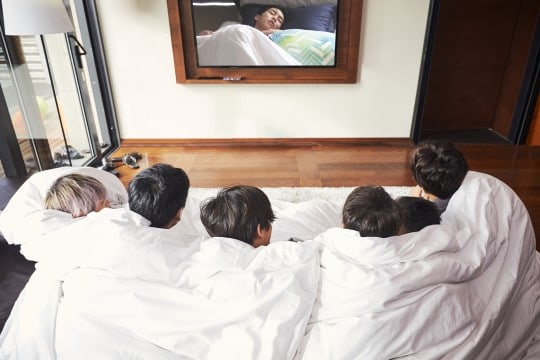 One plus of “It’s Dangerous Beyond the Blankets” is that you get to see celebrity interactions that you wouldn’t otherwise expect. These endearing friendships definitely make the show worth watching, especially if you’re multifandom.

5. At least one of your faves is probably there

Let’s be real here: lots of us are watching this show for the awesome cast. But no matter who you stan going into this, I guarantee you’ll love everyone by the time the show ends.

You’re welcome. Plus there’s more where that came from.

Are you going to watch “It’s Dangerous Beyond the Blankets” now? If so, tell us about it in the comments!