BTOB-BLUE and Brown Eyed Soul brought their A game to JTBC’s “Sugar Man 2.”

“Sugar Man 2” is a program that reintroduces classic hits and singers from the past through remakes and performances of these tracks by currently active singers.

On the April 15 episode, two members of Brown Eyed Soul were joined by BTOB-BLUE, a subunit formed by the group’s vocal line.

MC Yoo Jae Suk introduced the first “Sugar Man”as the “standard for R&B vocals.” Yoon Mi Rae added to the mystery when she appeared as an informant and said, “She is the top queen of our country’s R&B.” The identity of this “Sugar Man” turned out to be Ann One!

Ann One (also known as just Ann) received lots of love for her title track “Lonely Love,” which was released in 2004. When Yoo Jae Suk asked her about what she’s been up to, she replied, “I still work on music and am also a professor at an applied music school in America.” 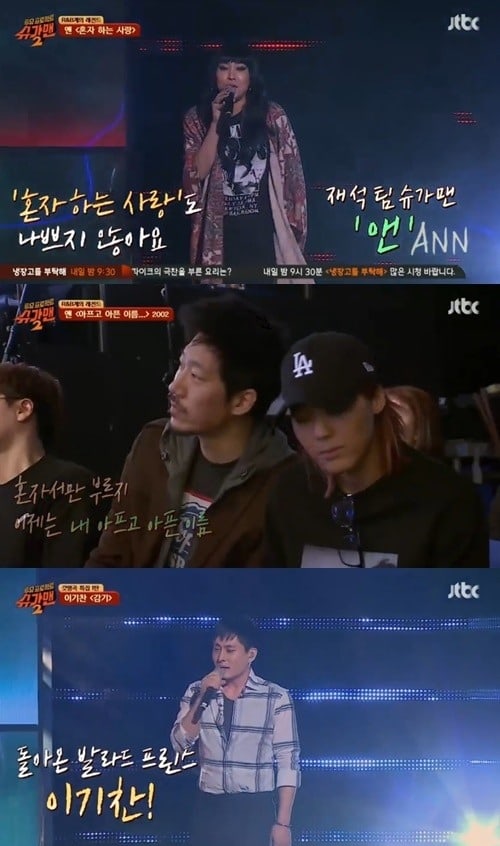 MC Yoo Hee Yeol then introduced his “Sugar Man” as someone who released a popular ballad in 2002. He added that this song achieved No. 1 for four consecutive weeks on music programs and sounded confident that many people would recognize this song.

Actor Jin Seon Kyu appeared as an informant and added, “This is a singer I really want to see on ‘Sugar Man.'” The second “Sugar Man” turned out to be Lee Ki Chan who sang his hit “Cold.”

Lee Ki Chan told viewers that he’s been working as an actor and releasing OSTs. He also shared that he appeared in the Wachowskis’ drama “Sense8” as Bae Doona‘s younger brother.

When asked about the song “Cold,” Lee Ki Chan said, “It’s a song that I composed and wrote the lyrics for.” Yoo Jae Suk asked the greatest amount he received in royalties for the song and the singer answered, “One car[‘s worth].” He also sang his other popular hits “Another Love Passes Again,” “Beauty,” and “Viva My Love” (literal titles).

BTOB
Lee Ki Chan
BTOB-BLUE
Sugar Man 2
Ann One
How does this article make you feel?