The number of dogs that are abandoned or given up for adoption each year in Korea is reaching approximately 650,000. Most abandoned dogs will either live on the streets or be taken to a shelter, but if they aren’t adopted, it is difficult for them to avoid euthanasia.

Therefore, a growing number of people have been advocating adopting dogs from shelters, including celebrities. Here are some celebrities who have given their furry friends a second chance at life through adoption!

Rapper Loco welcomed an abandoned dog into his home in December 2018. The dog, originally named Happy, had been abandoned by their owner in a loft when the owner moved out. Luckily, Happy was rescued by a volunteer, and hearing of Happy’s situation, Loco personally contacted the volunteer group to adopt the dog.

Loco shared a photo on his Instagram account and wrote, “Happy was abandoned in a room, but they are now part of our family with a new name, Latte. Latte will grow up in my mother’s home. Adopt don’t shop.”

NU’EST’s Aron celebrated the new year by taking to his personal Instagram account on January 1 to share a photo with the caption, “Introducing the new member of Aron’s family. Noah and Kkotsooni.”

In November 2018, a post was shared on social media that a dog had been abandoned because it shed too much fur and was living in a parking lot. Kkotsooni was rescued by Aron’s friend, and Aron decided to adopt her. Kkotsooni now lives in NU’EST’s dorms with Aron’s other dog, Noah.

Actress and former I.O.I member Kim So Hye appeared on channel A’s “Dog Papa” in 2016 to temporarily foster a dog called Milk, and she eventually adopted the dog herself.

Kim So Hye met Milk on the show and fell in love, and she was able to get permission from her parents to bring the dog home. She said, “I’m going to keep you with me till the end.” Kim So Hye shared a selfie with Milk last October, showing how much he’s grown. 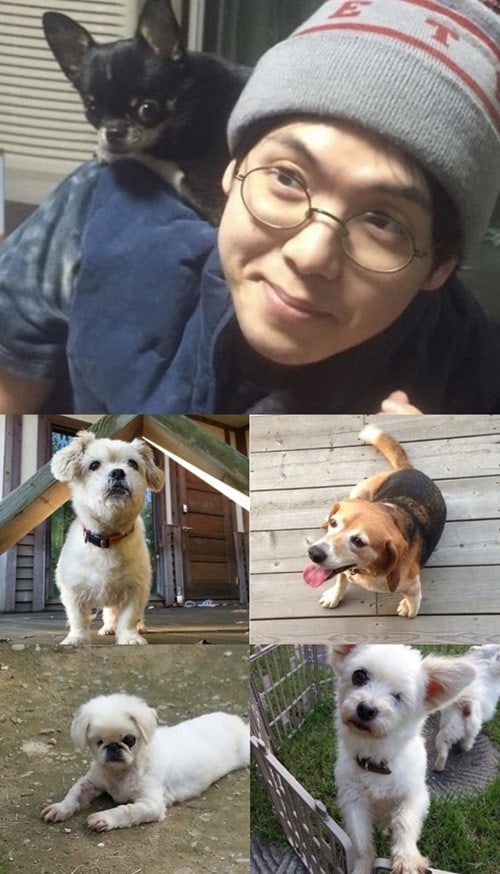 Rapper Mad Clown has been applauded for rescuing five dogs and becoming a family with them.

Mad Clown found his first dog wandering around the streets of Dongdaemun, and he named the dog Daemun. Then, he saved a dog from being used for lab experiments for a cosmetics company and named them Daegil. Next was Daebok, a dog who had been hurt by its owner, and Daepyeong, which lost an eye after being attacked by other dogs. He recently rescued another dog that was living on the streets and named it Minong.

After losing her dog, Jo Yoon Hee began volunteering at shelters to help abandoned dogs. She has adopted dogs with disabilities, from those that lost vision in one eye or finds it difficult to move around due to old age, and she often shares their life together on her Instagram.

Jo Yoon He once said, “I am being a responsible dog owner and only adopting as many dogs as I can responsibly take care of.”

In December 2017, Kang Seung Yoon announced that he had adopted a dog called Thor.

Thor had been rescued from a puppy mill and was awaiting to be euthanized as he couldn’t find a permanent home. Thor was rescued in November of that year, and the volunteers had shared Thor’s recovery on social media. Afterwards, Kang Seung Yoon expressed his desire to adopt Thor, and he brought Thor home.

Kang Seung Yoon opened up about the adoption during a V Live and said, “I don’t think it’s good to buy dogs at pet shops. I thought about whether I’d be able to be a responsible owner if I brought a dog home. I feel like I’m ready to be responsible now, which is why I brought Thor home with me.”

Lee Hyori is one of the most well-known advocates of animal rights in the Korean entertainment industry.

Soonshim, one of the dogs she has taken care of for a long time, was rescued by Lee Hyori while she was volunteering. The dog was soon to be euthanized but was saved and brought home by the star. Lee Hyori also raises other dogs and cats including Mocha, Seoksam, and Samshik in her home on Jeju Island.