Seo Yuri’s fiancé made a surprise appearance on “Video Star”!

Last month, the voice actress and TV personality announced her upcoming marriage soon after going public with her relationship on “Happy Together.”

During the June 11 episode of “Video Star,” Seo Yuri announced she’s getting married and revealed she isn’t going to have a wedding ceremony. She explained, “We were only going to register our marriage, but August 14 is my fiancé’s birthday. So we’re planning to have his birthday and our marriage anniversary on the same day.”

Seo Yuri also talked about her first meeting with her fiancé. She shared, “I wanted to contact him because I liked him so much, but I didn’t have a way to do that, so I used all my connections to ask for a blind date with him. But then I got into a really bad slump. I couldn’t afford to meet someone. I also heard he was in the entertainment industry and became hesitant.”

She continued, “My fiancé is a drama producing director, and he is in his early 40s. He was affiliated with MBC, but he resigned in February. He also released a jazz album with his own songs under the name ‘Ashburn.’ His name is Choi Byung Gil.”

Seo Yuri revealed that when she first met Choi Byung Gil, she thought he wasn’t anywhere near her ideal type. She admitted, “Before I knew it, I told him my innermost thoughts, and I cried during our first meeting. He said he liked me because I had been hurt and was brave enough to overcome my obstacles. When I told him that he’s a charming man but I wasn’t in the position to date and fall in love easily and that I was going to meet a man I could marry, he said we should get married.”

Then Choi Byung Gil made a surprise visit on the show with a bouquet of flowers and a sweet serenade for his fiancée. He said, “I have many things to learn from Seo Yuri. She inspires me to be passionate. I’m eight years older than her, but I learn a lot by watching Seo Yuri working hard.” 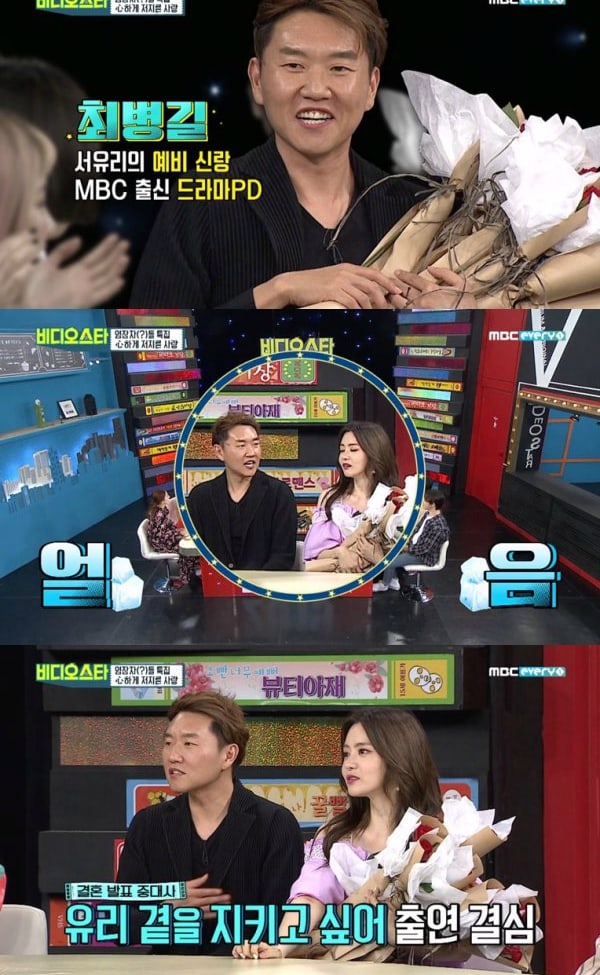 Seo Yuri
Video Star
How does this article make you feel?