“Psychopath Diary” is about a man named Yook Dong Shik, who coincidentally witnesses a murder and loses his memory after an accident that occurs while he’s fleeing the scene. He wakes up with no sense of identity and mistakes himself as the killer when he finds the murderer’s diary in his hands.

Before the script reading officially began, writer Ryu Yong Jae commented, “Our project is a story that changes as the main character thinks about what type of person he is. I think that type of belief can really change so many things, so I’m [writing the script] as if I’m truly a genius writer. If you all think that you’re the best, then this will really become the best work.” Director Lee Jong Jae also said, “I’ll work hard so that [the drama] we’re all working on together can be enjoyable.”

Yoon Shi Yoon added, “I think the most important thing is to be passionate and sincere. I’ll try my best.” Jung In Sun made everyone laugh when she chimed in, “I’ll work hard so we can go on a reward vacation!”

After these introductions, the cast and actors officially jumped into the script reading. Yoon Shi Yoon caught everyone’s attention with his acting skills, but he soon had them laughing when he portrayed Yook Dong Shik’s gullible nature with his nervous expression and hilarious way of talking. The actor immediately began to show off the character’s cool and dignified side, impressing everyone once again.

Jung In Sun expressed the emotions of her character Shim Bo Kyung, a patrol officer who lives solely in the present. She helped liven up the mood on set by working well with Yoon Shi Yoon, Kim Myung Soo, Choi Sung Won and other actors she was paired up with.

Park Sung Hoon immersed in his role as Seo In Woo, the real murderer. With his baritone voice alone, the actor was able to portray both the gentle director of the stock company Yook Dong Shik works at and a cold-hearted psychopath. 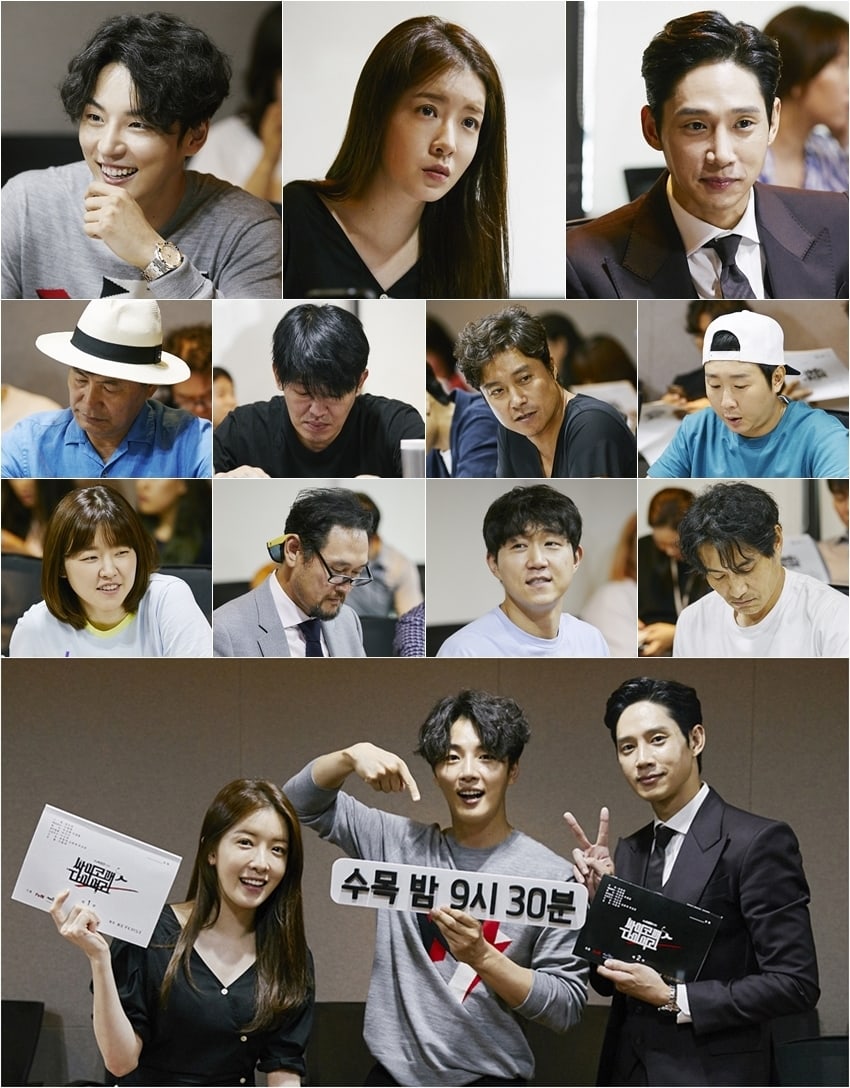 The production crew stated, “It was as script reading in which Yoon Shi Yoon, Jung In Sun, Park Sung Hoon, and the other cast members’ acting skills and chemistry stood out. Now that the script reading is over, I’m positive that [the drama] will be a fun project that switches between being a comedy and thriller. Please look forward to ‘Psychopath Diary.'” They then revealed that the drama will be in charge of bringing both laughter and tension to viewers during the second half of the year.