FTISLAND’s Minhwan kickstarted his fitness journey with some help from PENTAGON’s Hongseok!

On the December 4 episode of KBS’s “Mr. House Husband,” Minhwan and Yulhee played with their son Jjangi.

Minhwan quickly got tired after holding up his son and running around with him. In August, Yulhee and Minhwan announced that they’re expecting twins, and the couple voiced concern about taking care of three children in the near future. He said, “What am I going to do when two more babies are born next year? I don’t think average physical endurance is going to cut it.” Motivating her husband to exercise, Yulhee told him, “If you decide to exercise, I’ll make time for you to do it.”

The FTISLAND member then headed to a gym decorated with a wall full of celebrities’ autographs. He stood in front of the mirror and lifted dumbbells when Hongseok walked over to say hi.

Hongseok is well-known for his fit body and previously bared his abs on the cover of Men’s Health Korea magazine. After introducing himself, he stated in an interview, “I officially began working out about a year and a half ago. I usually work out three to five days a week for about an hour and a half to two hours.” 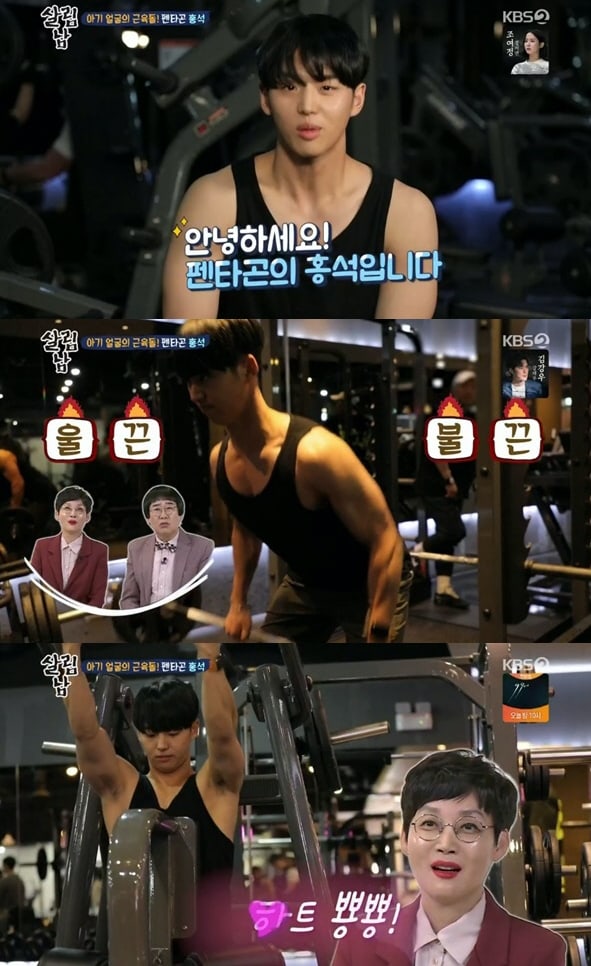 Looking at Hongseok’s body, Minhwan commented, “Your body is no joke” and the idol shyly replied, “I like to exercise.” Minhwan asked to feel his muscles and was wowed by his rock hard abs. He then told Hongseok to touch his stomach in return and asked for his thoughts. The PENTAGON member replied, “[The muscles] are in there. I can feel them.”

Minhwan revealed, “I gained 10 kilograms (approximately 22 pounds) after getting married. It’s been a long time since I came to the gym, so I don’t know where to start.” Hongseok suggested that they work out together and they began doing bench presses with 40 kilograms (approximately 88 pounds) of weights. Hongseok stood behind the bar to give pointers and count reps for Minhwan. After a couple lifts, the FTISLAND member laughed and asked for Hongseok’s help.

Hongseok then showed him how to do pull-ups and Minhwan watched in fascination. They completed the workout by planking for a little over two minutes followed by a ride on the stationary bike. Minhwan asked, “How much do you think I’ll need to exercise to look like you?” and Hongseok replied, “I think in about a year if you also control your diet and work out for three times a week.”

Minhwan commented, “I do want to try it. I think I do need to challenge myself.” Encouraging him, Hongseok said, “I’ll cheer for you.” In his interview, Minhwan added, “It felt as if my body had changed after working out and it made me think, ‘Why not?'” 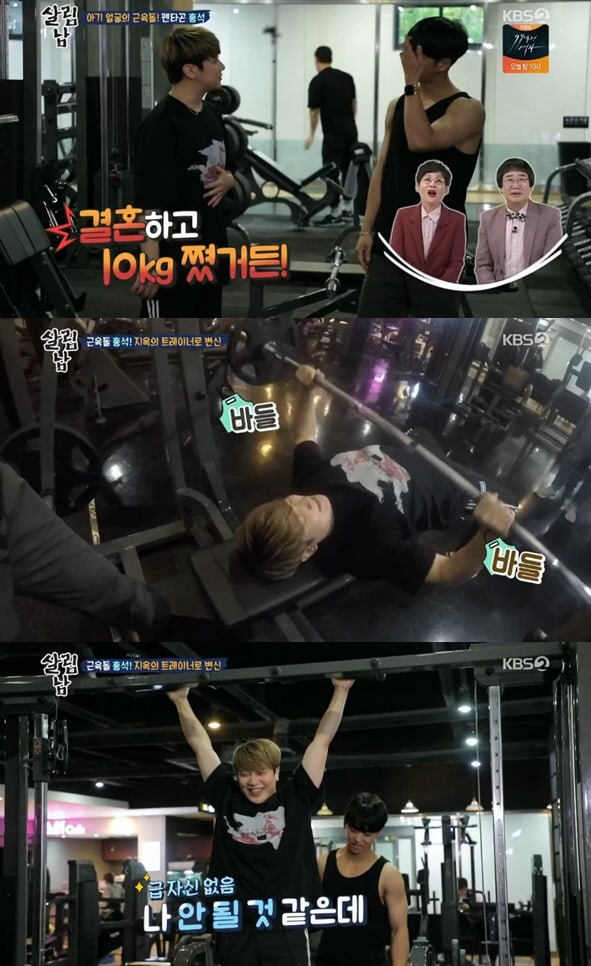