In particular, Lee Sang Yoon discussed his currently airing drama, SBS’s “VIP.” “VIP” tells the story of a team that takes care of VIP clients at a high-end department store, with Lee Sang Yoon playing the team head Park Sung Joon. Jang Nara plays his wife and colleague, Na Jung Sun, who comes to suspect him of having an affair. 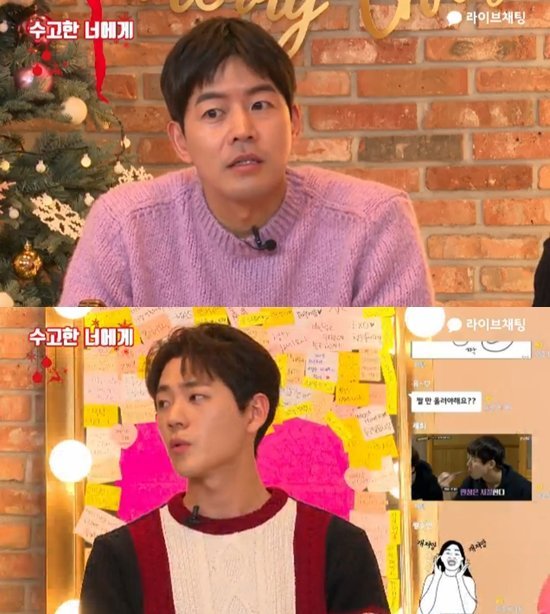 On the live chat broadcast, Lee Sang Yoon said, “This is the first time in my life that I’ve been cursed at so much. I expected this to a degree but it exceeded my expectations. Over 10,000 people have come into this broadcast just to yell at me. I’m grateful that they can immerse themselves into the drama so much to curse me out.”

Shin Jae Ha commented, “You said that the drama would do as well as Park Sung Joon was hated, so it’s doing really well.” Lee Sang Yoon agreed and said with a laugh, “The drama is doing really well. I am being cursed at by people all over the world. If it’s a good thing to be cursed out, then it’s really doing well.”

During the broadcast, Lee Sang Yoon called his co-star, Jang Nara, to ask her how she was doing. Although the drama is still broadcasting, filming ended in October.

Jang Nara said, “I am working a little and exercising regularly. I am studying on my own and receiving vocal lessons.” When asked about the popularity of “VIP,” she said, “I am very grateful. People liked it more than I expected, so I was surprised.”

Lee Sang Yoon asked her if she knew about the response he was getting and she said, “Our drama would not be popular if Lee Sang Yoon’s Park Sung Joon did not exist.” She added later, “I want to say that Lee Sang Yoon really worked hard to act the role of Park Sung Joon. Pyo Ye Jin worked really hard as well. They had to act something that isn’t easy, and they probably felt a lot of confusion, but they centered and led our drama well.”

Check out the latest episode of “VIP” here!