On the June 7 episode of SBS’s “Running Man,” TWICE appeared as guests.

After their arrival on set, the TWICE members shared what they had been up to since their last appearance on the show. Chaeyoung also showed her impressions of Lim Kim and Han So Hee from “The World of the Married.”

In the Round 1 mission, which was the nametag ripping game, Jun So Min and TWICE’s Nayeon, Jeongyeon, and Dahyun were eliminated early. As members of the same team, Jun So Min, Nayeon, and Jeongyeon began talking together after Jun So Min commented, “No one even texts me.”

Nayeon and Jeongyeon asked her for her phone number so that they could text her, and Jun So Min joked, “If it was a male guest, I’d take my phone out right away.” She added, “For three years, I’ve never had a male guest ask me for my phone number. Does this make sense?”

Nayeon asked, “Have you ever had a male guest that you were really interested in?” When Jun So Min didn’t reply out of embarrassment, the TWICE members referenced their JYP labelmate, GOT7’s Jinyoung, and said, “On TV, it looked like you really liked Jinyoung.”

Jun So Min said, “He’s so good-looking, isn’t he? It was the first time I felt my heart cave in because of how good-looking someone is.” Nayeon said, “You should’ve approached him,” but HaHa, who was listening in on the conversation, joked, “She got rejected.”

Jun So Min asked the TWICE members about their ideal types and Jeongyeon said, “I like Yang Se Hyung. I like Yang Se Chan too, but after I saw him today, he’s not very good-looking.” 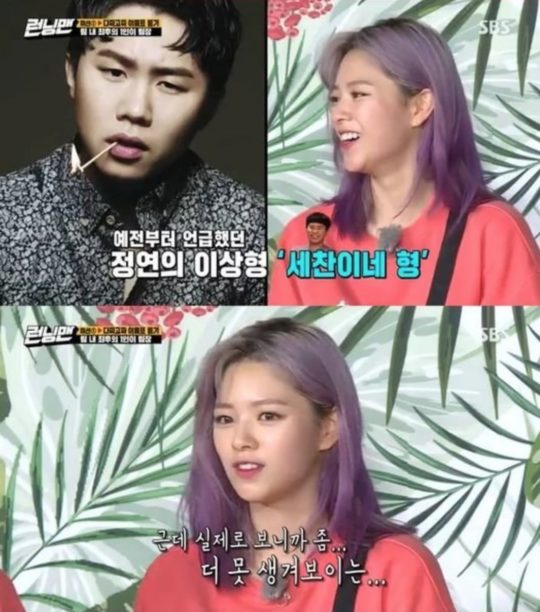 TWICE
jun so min
Jeongyeon
Running Man
Nayeon
How does this article make you feel?