BLACKPINK and EXO-SC have swept this week’s Gaon charts!

On July 23, Gaon Chart officially announced that BLACKPINK and EXO-SC had, between the two of them, topped all five of its charts for the week of July 12 to 18.

EXO-SC, the EXO subunit consisting of Sehun and Chanyeol, achieved a double crown after their first full-length album “1 Billion Views” debuted at No. 1 on the physical album chart—while their accompanying title track of the same name debuted at No. 1 on this week’s digital download chart.

Meanwhile, BLACKPINK maintained their triple crown from last week, holding onto No. 1 on the overall digital chart and the streaming chart with their latest hit “How You Like That.” The group also topped Gaon’s Social Chart 2.0 for the eighth week in a row.

Congratulations to EXO-SC and BLACKPINK!

EXO-SC’s “1 Billion Views” made its debut at No. 1 on this week’s physical album chart, while the special edition of BLACKPINK’s “How You Like That” debuted at No. 2. GFRIEND’s new mini album “回: Song of the Sirens” entered the chart at No. 3, followed by Red Velvet – Irene & Seulgi’s “Monster” at No. 4 and Stray Kids’ “GO生” (“GO LIVE”) at No. 5. 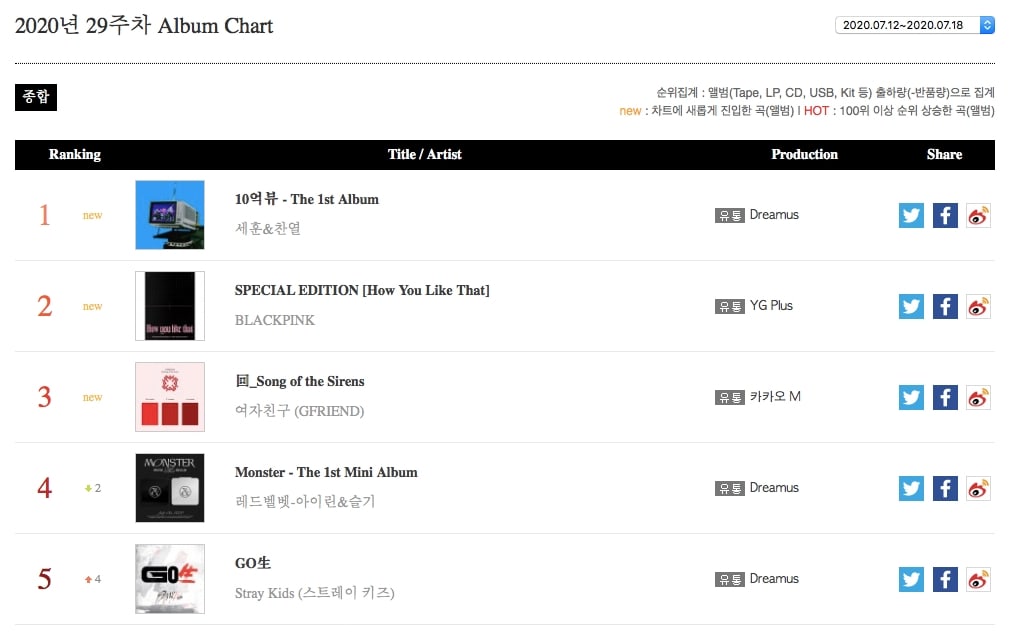 EXO-SC’s new title track “1 Billion Views” entered the digital download chart at No. 1 this week, while SSAK3 claimed both of the next two spots on the chart: their remake of “In Summer” rose to No. 2, while their debut track “Summer Sea Again” entered the chart at No. 3. Finally, MAMAMOO’s Hwasa‘s “Maria” and BLACKPINK’s “How You Like That” rounded out the top five at No. 4 and No. 5 respectively. 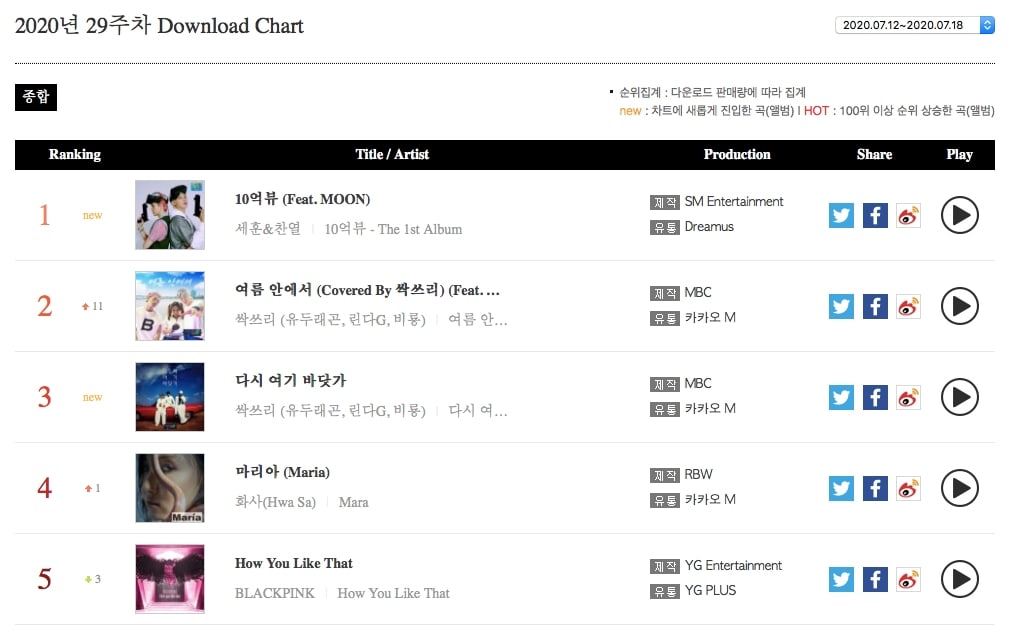 BLACKPINK’s “How You Like That” continued its winning streak at No. 1 on the overall digital chart this week, as Block B’s Zico’s “Summer Hate” similarly held onto its spot at No. 2. SSAK3’s “In Summer” came in at No. 3 for the week, Hwasa’s “Maria” at No. 4, and BLOO’s “Downtown Baby” at No. 5. 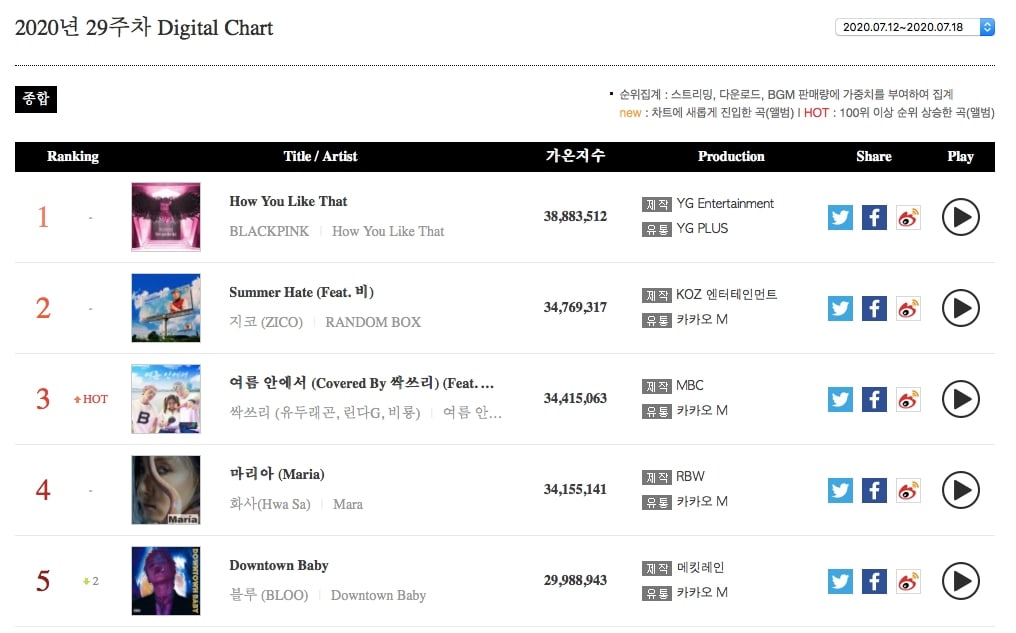 BLACKPINK’s “How You Like That” and Zico’s “Summer Hate” maintained their respective positions at No. 1 and No. 2 on this week’s streaming chart as well. Hwasa’s “Maria” charted at No. 3, SSAK3’s “In Summer” at No. 4, and BLOO’s “Downtown Baby” at No. 5. 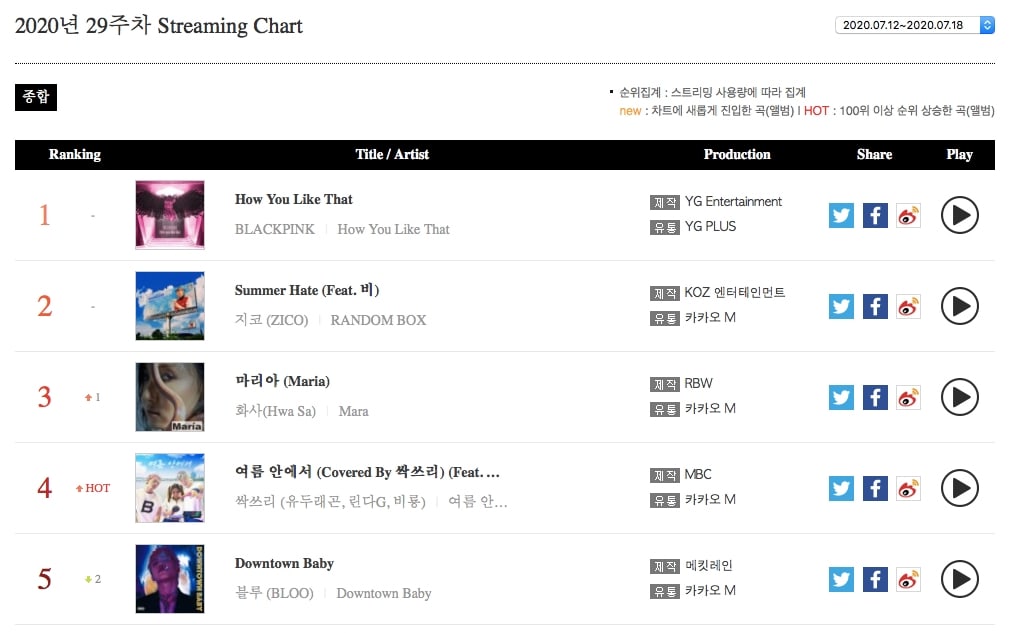 BLACKPINK continued their reign over Gaon’s Social Chart 2.0 for the eighth consecutive week, while trot singer Kim Ho Joong shot up in the rankings to claim No. 2. BTS stayed strong at No. 3, followed by Im Young Woong at No. 4 and GFRIEND at No. 5. 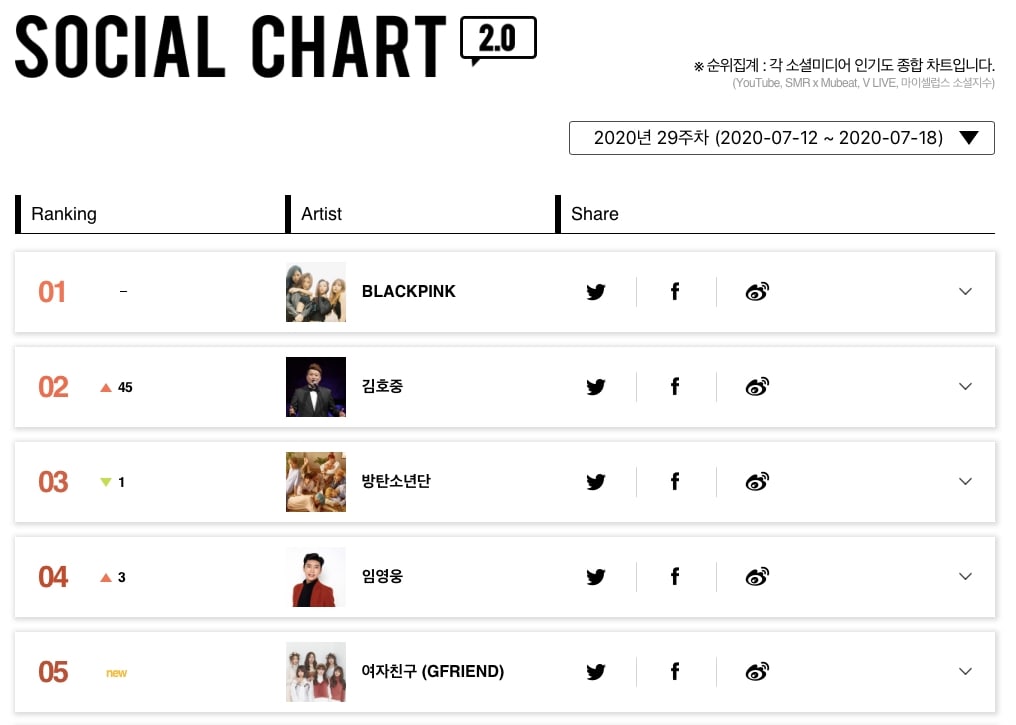 Watch Chanyeol in his Chinese film “So I Married My Anti-Fan” with English subtitles below: