Things are about to become more tense in the second half of “Train”!

The OCN drama is a sci-fi thriller about two parallel universes that broke apart when a single choice was made on the night of a murder. Yoon Shi Yoon stars as Seo Do Won, a violent crimes detective at the Mu Kyeong Police Station. In universe “A,” Seo Do Won lives with a sense of guilt because of his father’s sins. In universe “B,” his father’s crimes lead him into a life of corruption. Han Seo Kyung (played by Kyung Soo Jin) in universe “A” overcomes the trauma of her father’s death thanks to Seo Do Won’s kindness, while universe “B” Han Seo Kyung harbors deep hatred for her father’s murderer.

Below are three clues that will impact the mystery of “Train”!

Seo Do Won headed to Mukyeong Station to find the mysterious train that made him move to universe “B.” After hearing through a station employee that the same train comes every rainy day, Seo Do Won found clues that the last train to arrive at Mukyong Station at 9:35 was “8210.” While searching inside the suspended train, he found traces of wet dirt on the floor and realized that someone had been inside the train just before him.

That’s when the train system phone rang, and over the phone, the killer said, “We’re all living a few lives at the same time. You crossed the border. Have you ever felt the pain of vomiting blood because your intestines were snapping one by one? Live like you don’t exist if you don’t want to lose something precious again.” Shocked, Seo Do Wan wandered around the train base to find the culprit, but he had already disappeared. However, his notebooks and photos were set on fire, raising tension for the next events to come. 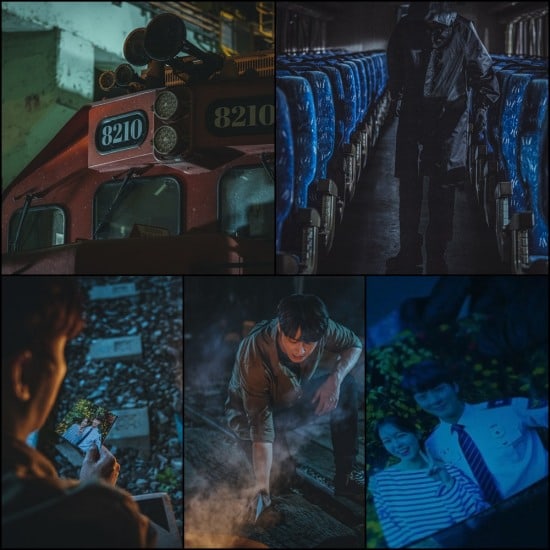 In one of the episodes, the criminal walked through the passage normally and then soon froze as if his legs stopped working. He then quickly pulled out a pill bottle and took a pill before limping away. The bottom of the passageway was left with dirt falling from the soles of the his shoes.

Furthermore, Seo Jae Cheol (Nam Moon Chul) entered Han Seo Kyung and her father Han Kyu Tae’s (Kim Jin Seo) house in a drunken state 12 years ago and discovered a dead Han Kyu Tae. He rushed out of the house in alarm and fell down after stepping on the pill bottle. It seems like the pill bottle will serve as a big clue to finding the culprit behind the murder case.

In the previous episode, it was revealed that Kim Jin Woo (Kim Dong Young), who was arrested as a leading suspect in the disappearance of Jung Kyung Hee (Eum Ok Ran), planned to kill the CEO of Gunhyung Development to avenge his unjustly deceased grandmother. At the end of episode six, Han Seo Kyung’s stepmother Jo Young Ran was killed by someone while grabbing onto Kim Jin Woo who broke into the CEO’s home.

Above all, Jo Young Ran was wearing a necklace of Han Seo Kyung’s mother, who went missing 12 years ago during the Mukyeong Station murer case, which was a mark left by the serial killer whenever he killed the victims. It raised questions about why Jo Young Ran became another victim and how she had something to do with the serial killer.

The production staff of “Train” said, “If there are questions about parallel world mysteries, the second act will feature the process of solving them one by one. There will be unexpected twists coming from all over the place, so please look forward to them.”