After learning various dances such as EXO‘s “Growl,” “Monster” by Red Velvet’s Irene and Seulgi, and 2PM’s “My House,” Kang Ho Dong then set out to master the dance for SuperM’s recent single “100.”

With the help of Shindong and SuperM’s Kai and Taeyong, Kang Ho Dong worked hard to master the choreography. After a final round of practice, the group monitored his performance. Kai appeared especially impressed by Kang Ho Dong’s dance, telling him, “You danced better than I could have imagined.”

The other members of SuperM then gathered to react to Kang Ho Dong’s cover of their own song, letting out exclamations of surprise the moment Kang Ho Dong appeared. Taemin complimented him, saying, “He’s right on the beat.” Baekhyun commented, “He looks cool since his facial expression is so serious.” Taemin then let out a laugh watching Kang Ho Dong cover his own part, asking, “Did I do it like that?” All of the members appeared impressed at his ending pose as they all brought their hands to their mouths to copy him. 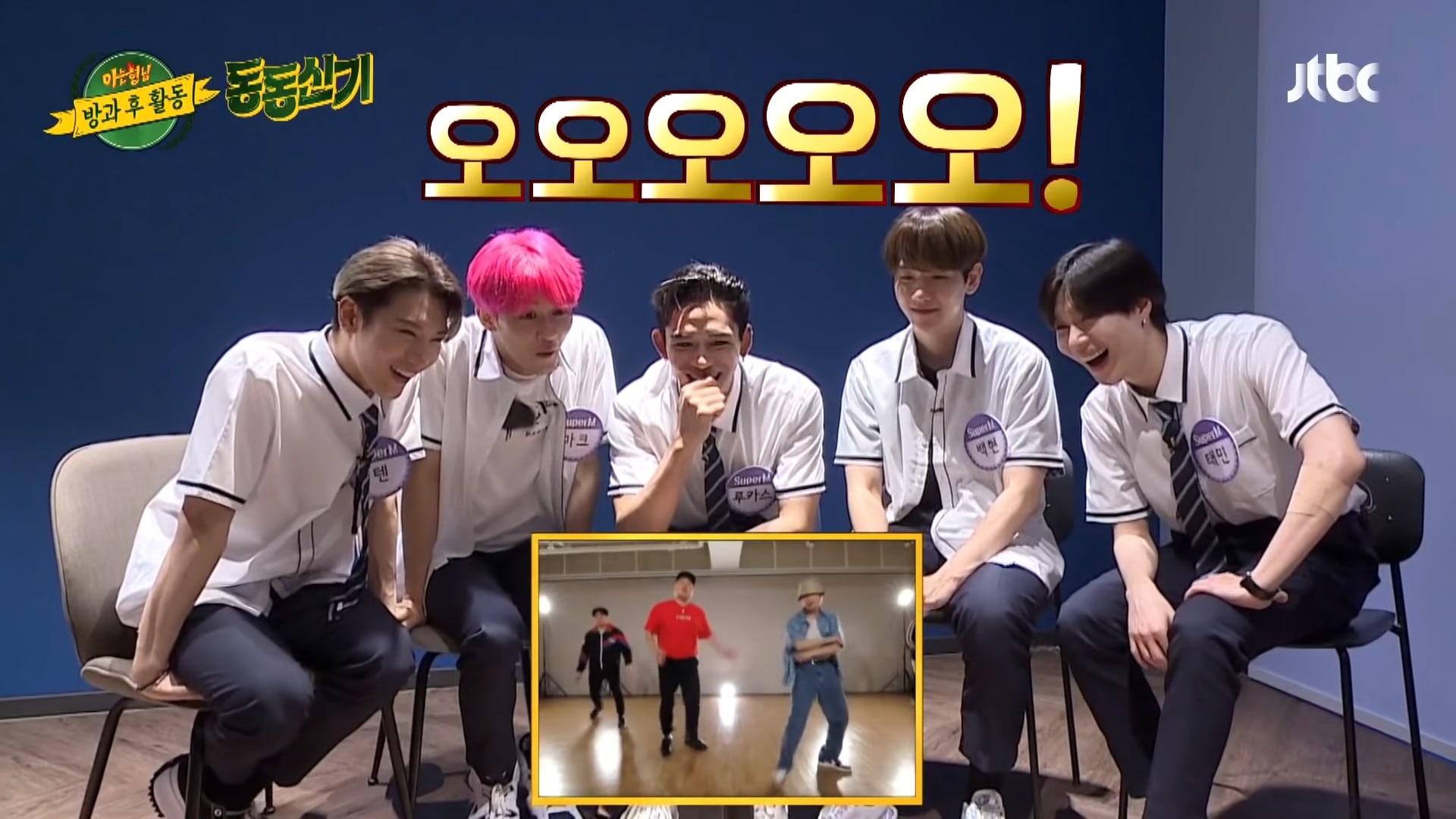 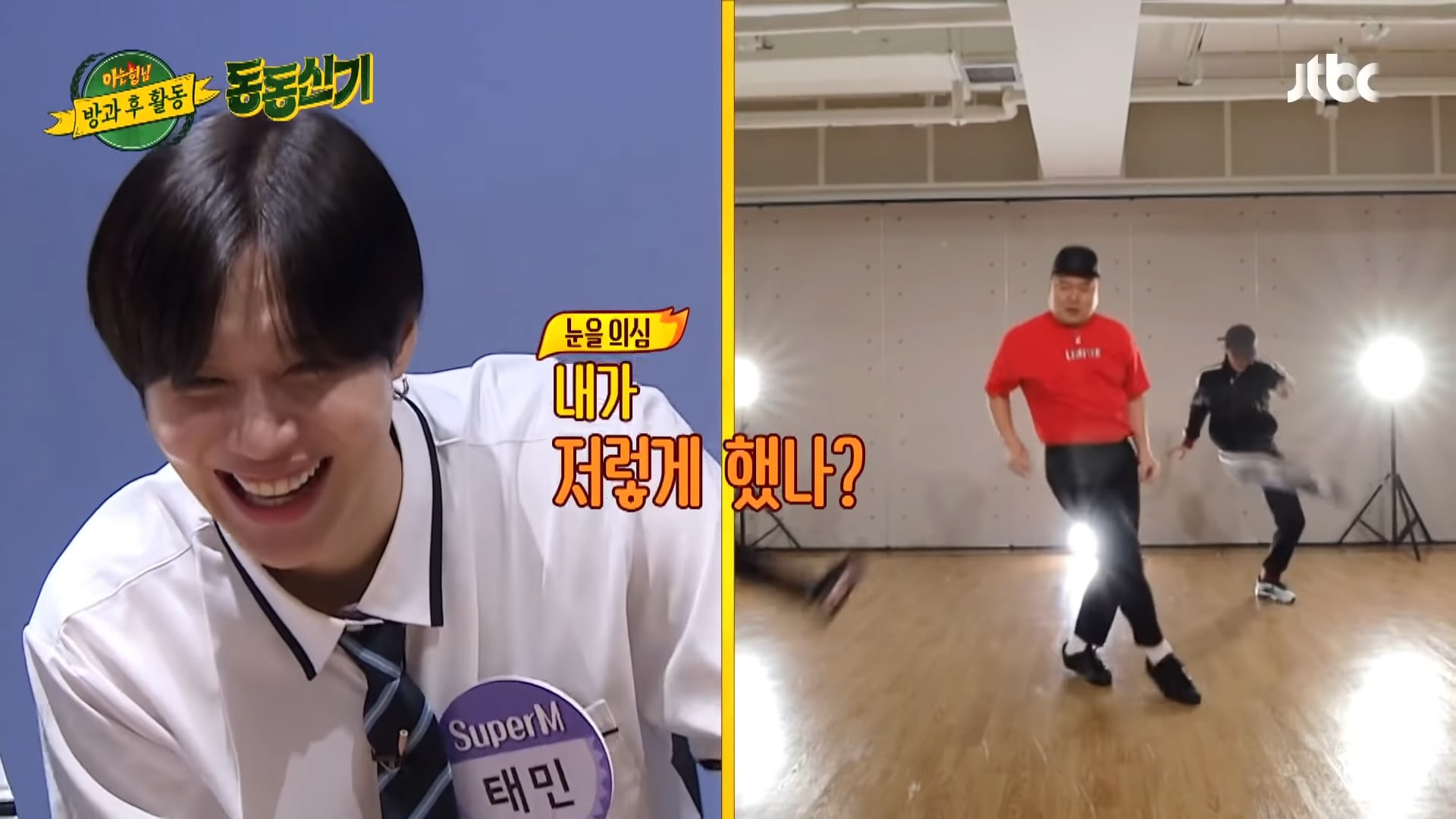 Taemin decided to give Kang Ho Dong a score of 90 points, explaining, “He’s already familiar enough with the choreography that he’s starting to be more relaxed.” He also pointed out that Kang Ho Dong performed without looking at the mirror, which meant that he really memorized the choreography well. Mark said, “He really has the energy needed for the center position,” complimenting Kang Ho Dong’s strong presence in the dance. Ten also commented positively on Kang Ho Dong’s freestyle moves throughout his performance. 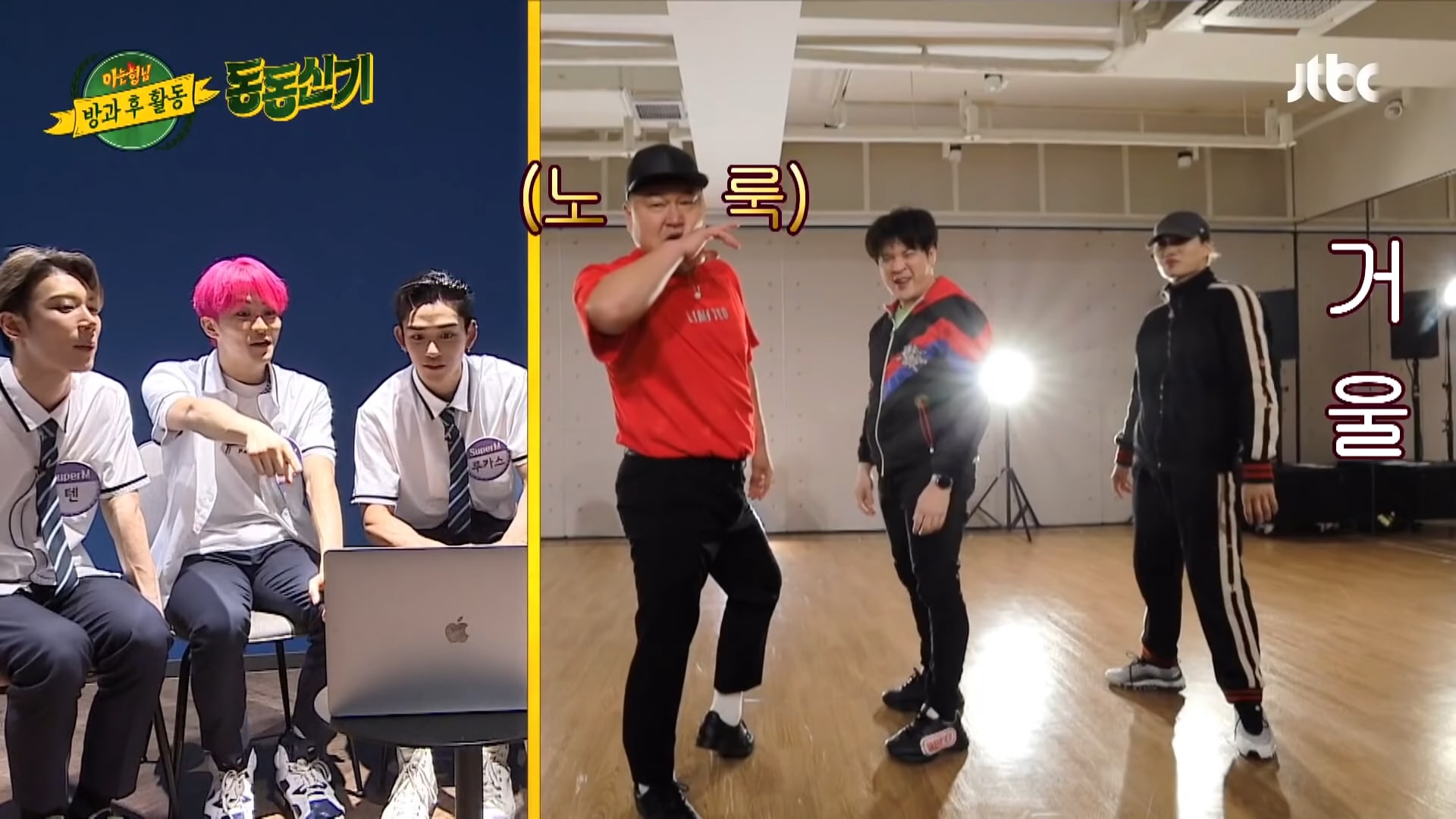 Moving on to discussing what Kang Ho Dong could improve, Taemin described a part of the choreography in which he moved too fast. However, Baekhyun added that there was no real need to keep the beat of the song as long as he had feeling in his movements. They also agreed that Kang Ho Dong was too strong throughout the dance, but Baekhyun jokingly pointed out that his last name is “Kang,” which in Korean can mean “strong.”

Mark finished up with a final comment, saying, “Thank you so much for covering ‘100,’ and we’ll keep watching TTXQ.” TTXQ is the name of Kang Ho Dong and Shindong’s unit. 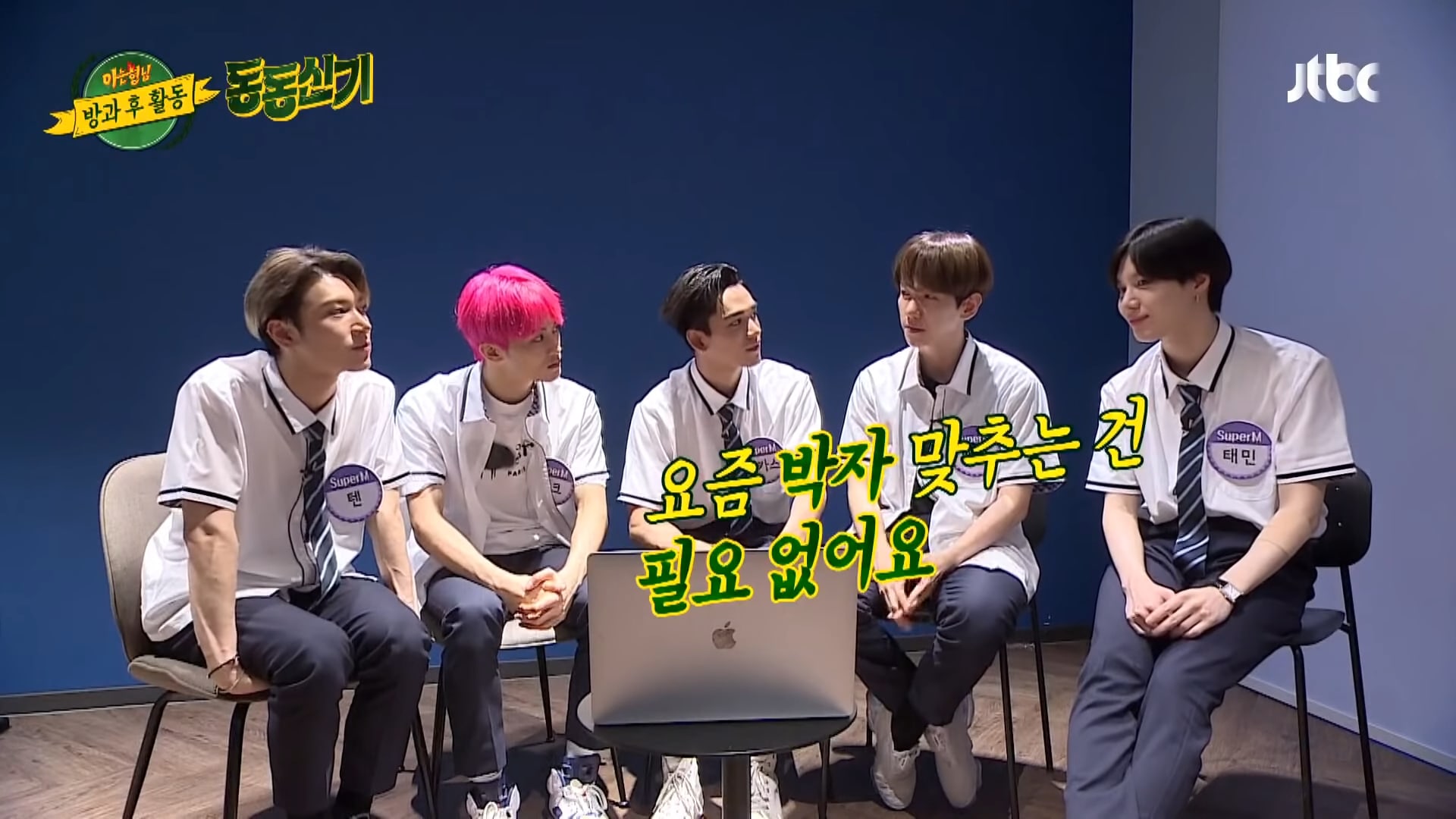 Next up to react was Girls’ Generation’s Hyoyeon, who is widely known for her superb dancing ability. While she observed Kang Ho Dong’s performance, she noted that he executed the key points of the dance well. Her amazement continued to grow throughout the dance, although she let out a small laugh at his attempt at a body wave. 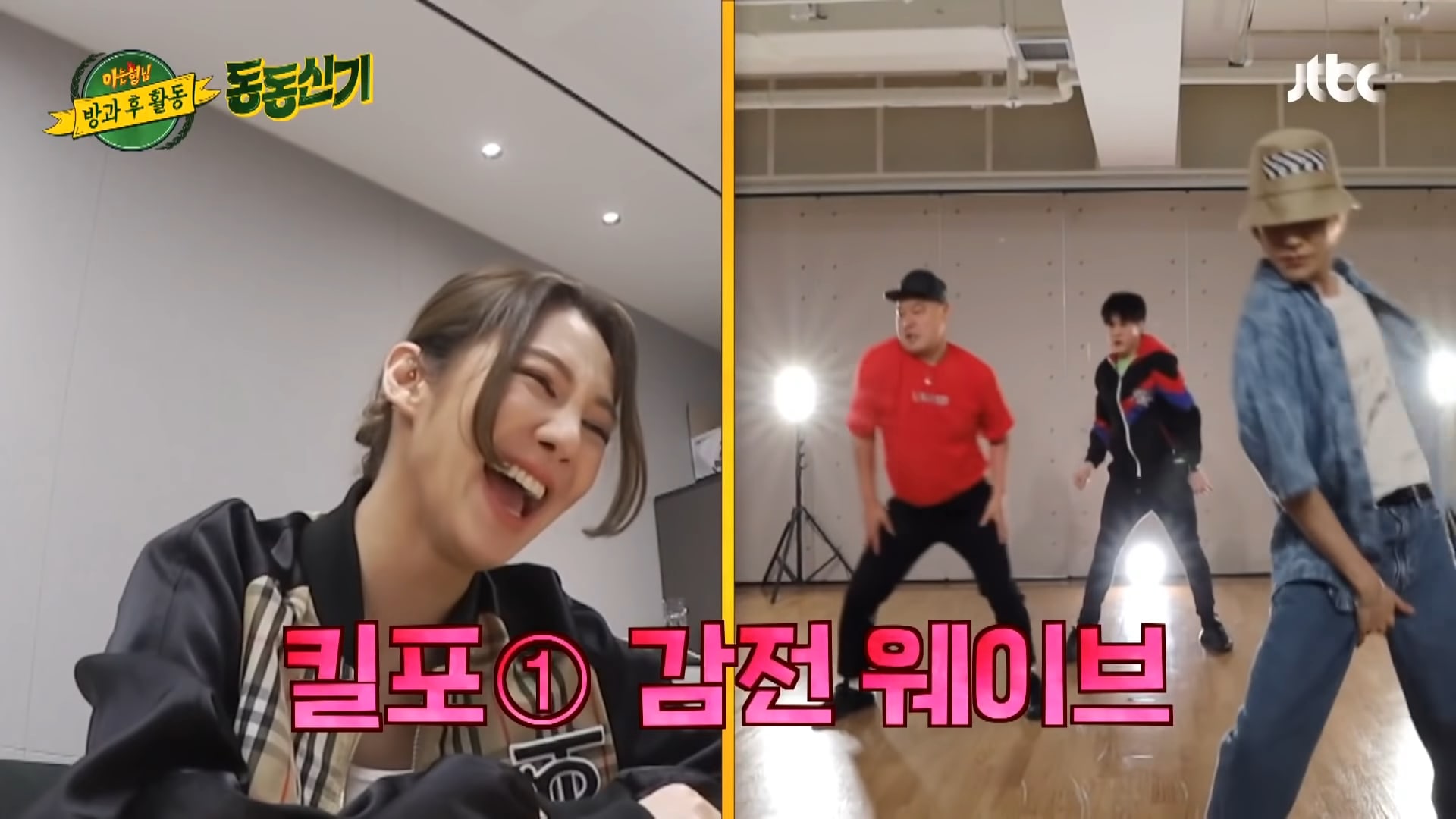 Hyoyeon gave Kang Ho Dong a score of 78 out of 100 and expressed her surprise at how nimble his dancing was, also complimenting his attention to the formations. However, she noticed that Kang Ho Dong focused so hard on his dancing that his facial expressions were lacking. After hearing that SuperM said his dancing was too strong, Hyoyeon agreed and said, “People who dance strongly have a hard time toning down their strength.”

After showing off her own dancing skills, Hyoyeon wrapped up her commentary with well wishes for Kang Ho Dong, saying, “I hope you reach your goals. Afterwards, come have a locking dance battle with me, Kai, and Donghae.” 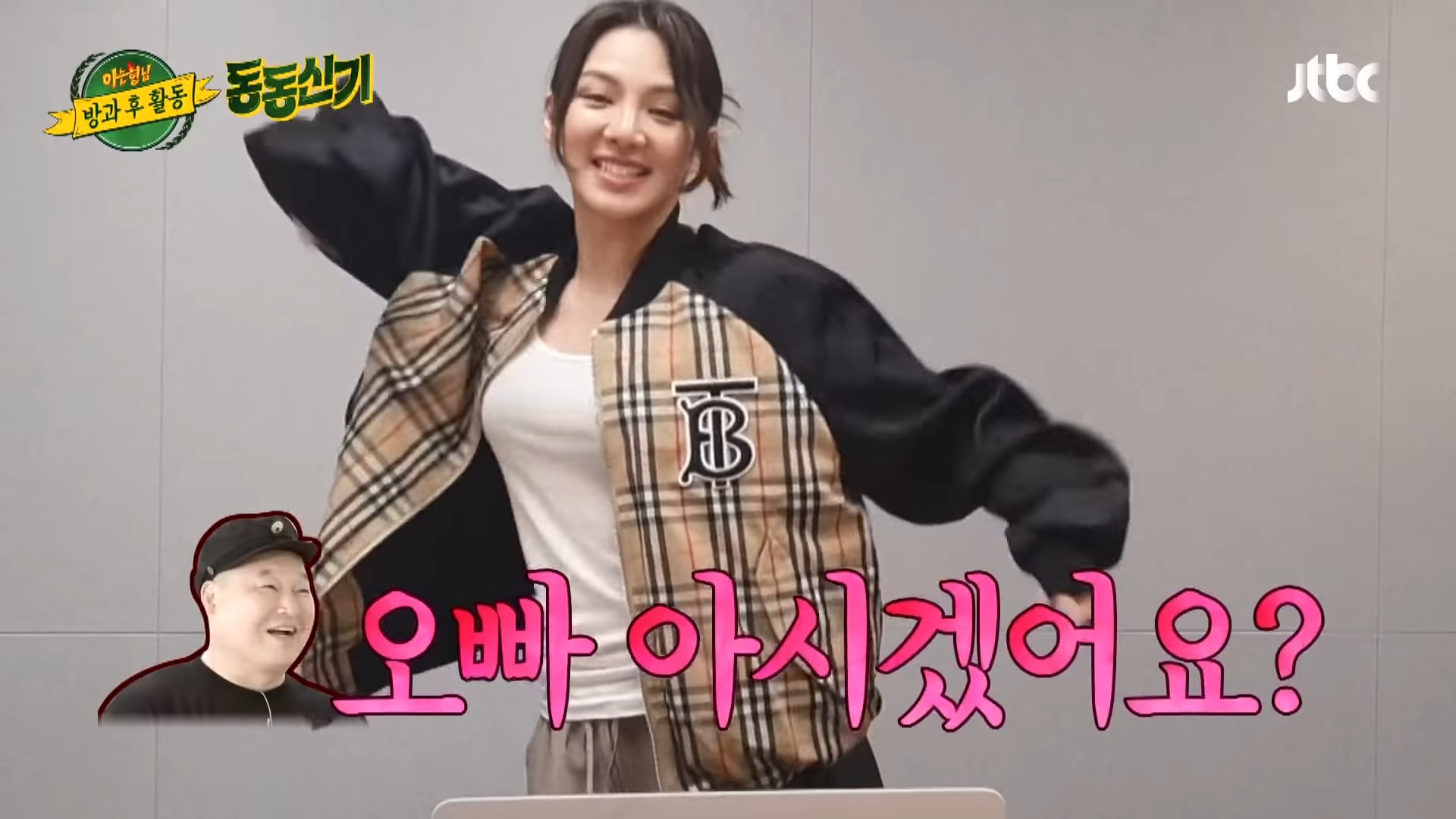 Last up to react to Kang Ho Dong’s dance cover were Block B’s Park Kyung and P.O. The pair became excited from the moment they pressed play, immediately letting out surprised noises as they copied his hand motions. They continued to laugh in amazement, with Park Kyung adding, “He’s very enchanting.”

After the end of the performance, P.O exclaimed, “He definitely dances better than us.” When asked if they thought Kang Ho Dong could debut as an idol, P.O joked that he would be eliminated as a trainee. Nonetheless, P.O said he would give Kang Ho Dong a score of over 90 points, and Park Kyung said he wanted to give him 100 points just for his bewitching hand movements. 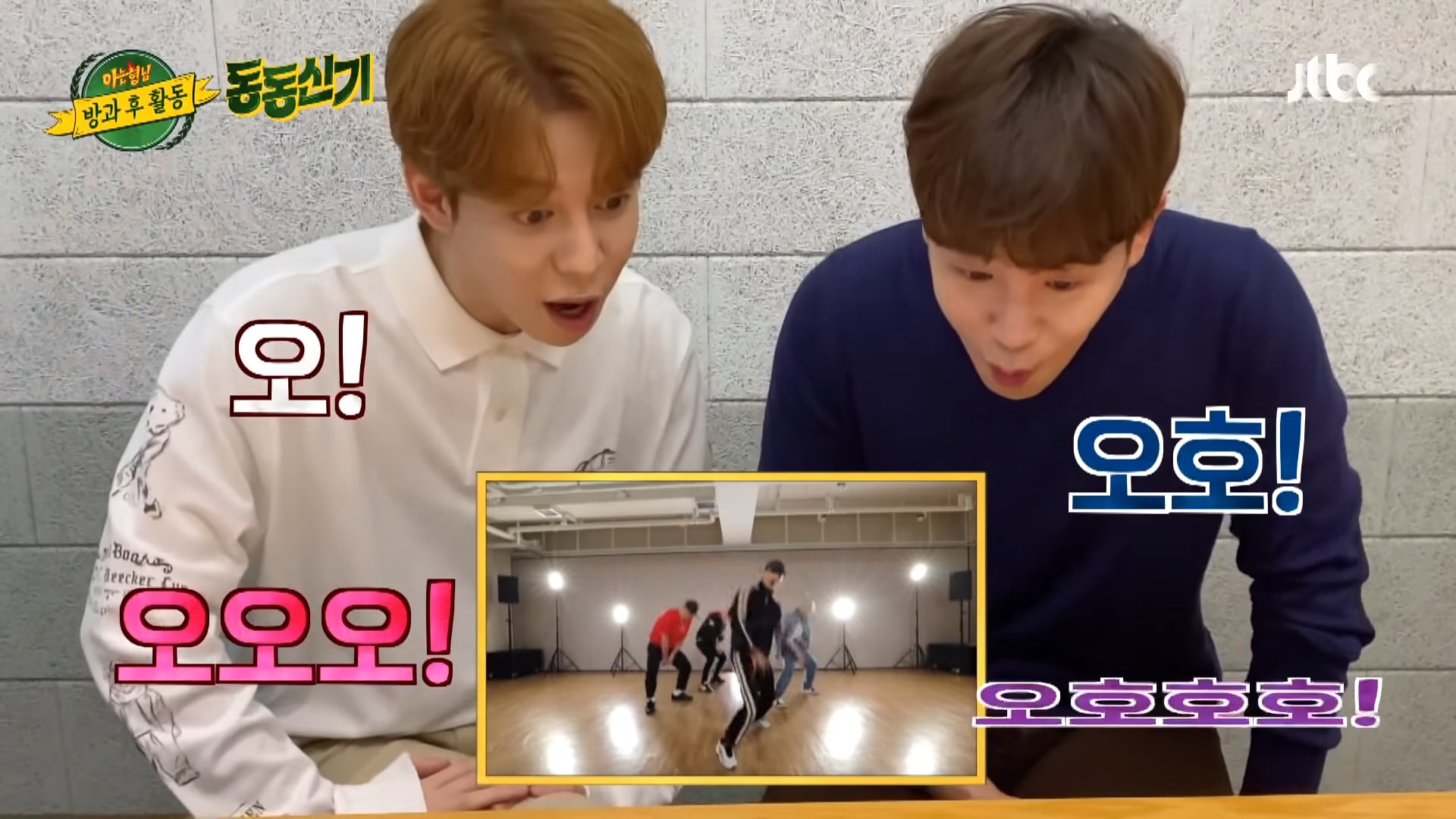 P.O tried to leave a video message for Kang Ho Dong, saying, “I enjoyed your performance, and it looks like you’re having a lot of fun,” but then he started laughing as he confessed that he didn’t know what to say. While Park Kyung laughed next to him, P.O added, “I enjoyed it, and you worked hard! Keep going!” 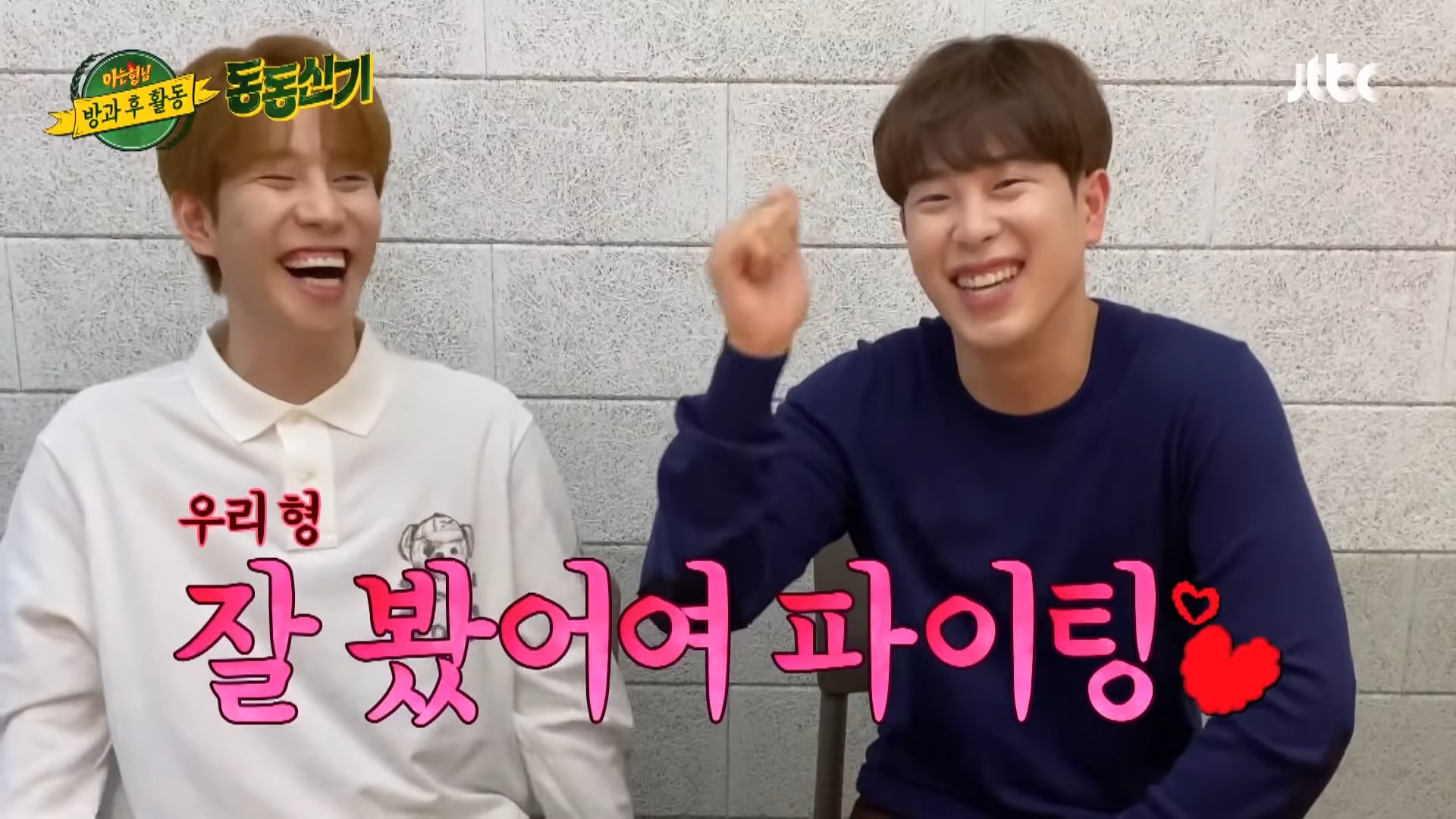 Watch the latest episode of “Ask Us Anything” below: