SF9’s Rowoon expressed his thanks to Lee Je Hoon for sending him a gift!

Rowoon is currently appearing in the drama “She Would Never Know,” playing the character of Chae Hyun Seung opposite actress Won Jin Ah in a complicated office love story of two co-workers.

On January 22, Rowoon posted a video in his Instagram story of the coffee truck sent by Lee Je Hoon. The banners on the truck read, “Coffee has arrived that’s as hot as the love of straightforward man Hyun Seung. Rowoon, keep it up! From, Lee Je Hoon.”

Another banner reads, “Rowoon, don’t drink that coffee. Today, just drink the coffee bought by Lee Je Hoon!” The banner is a play on the Korean title of Rowoon’s drama, which is “Sunbae, Don’t Put on That Lipstick.”

Rowoon tagged Lee Je Hoon and wrote on the video, “Thank you. I’ll gain strength and work hard at filming.” 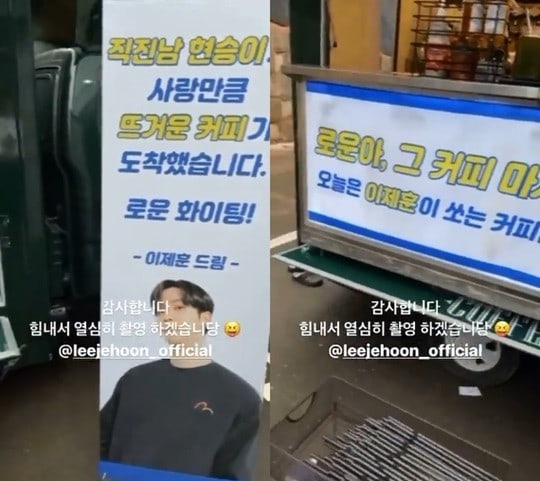 Lee Je Hoon and Rowoon acted together in the 2018 drama “Where Stars Land.”

Watch “Where Stars Land” below!

SF9
Lee Je Hoon
Rowoon
How does this article make you feel?