KBS 2TV’s weekend drama has revealed four main points that viewers can look forward to in the upcoming episodes.

Previously, it was revealed that the mysterious figure wearing a raincoat who kept lingering near the car on the day before Oh Maeng Ja (the Lee sisters’ mother) was murdered was a woman. The search for the criminal begin in earnest, and the production crew shared four things to keep an eye on in the next couple episodes.

1. Who is the mysterious woman?

A high school girl shared that she ran into a mysterious woman the night before Oh Maeng Ja was killed. As a result, all the women connected to Oh Maeng Ja were listed as suspects in the case and investigated by the police once more. Lee Chul Soo (Yoon Joo Sang) went to the detective and insisted his daughters had nothing to do with the case. Then it was revealed that the wife of the man who had been in the car with Oh Maeng Ja could be the killer. The detective showed the photos of Lee Gwang Nam (Hong Eun Hee), Lee Gwang Sik (Jeon Hye Bin), Lee Gwang Tae (Go Won Hee), Oh Bong Ja (Lee Bo Hee), and the wife of the man from the car to the witness, but she gave an ambiguous answer saying she wasn’t sure. The Lee sisters suspected their father had dressed up as a woman, and curiosity is mounting over who this woman can be.

2. Why is Lee Chul Soo so eager to hide Oh Maeng Ja’s secret?

When the investigation into the murder of Oh Maeng Ja began, Lee Chul Soo desperately asked the detective to never reveal his wife’s affair and just say that the man who had died in the car with her had been nothing more than just her acquaintance. He explained, “If my children find out the truth, they’ll be devastated. They don’t know she cheated on me.” In particular, Oh Bong Ja and Oh Taeng Ja (Kim Hye Sun) talked about how Oh Maeng Ja seduced Lee Chul Woo, who already had a fiancée at the time, and had Lee Gwang Nam with him. So what is the real reason why Lee Chul Soo doesn’t want to reveal this secret to his daughters? 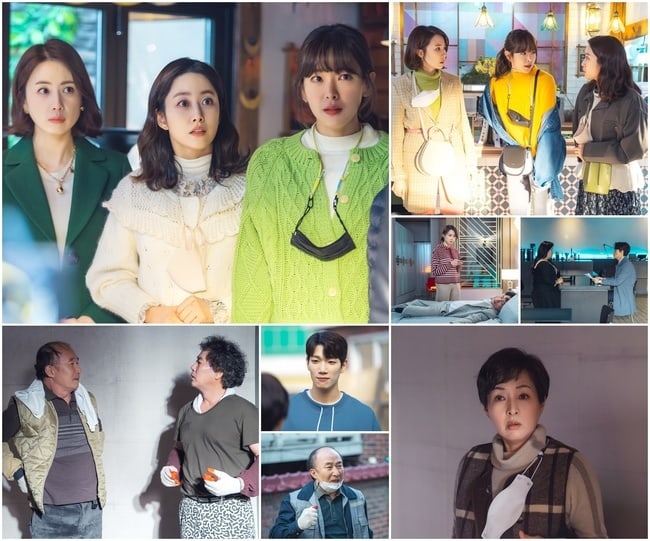 One key relationship in the story involves Oh Bong Ja and Han Dol Se, who had been lovers a long time ago. Thirty-five years ago, the two had promised to run away, but he backed out repeatedly, and they eventually went separate ways. Despite that, Oh Bong Ja continued to show her love for him by paying for his surgery, cell phone bills, and dental implant. Now that she stopped being generous with him, he is showering her with affection and courting her whenever he has the chance. It will be interesting to see what direction their romance will take.

4. What is the hidden object in Lee Chul Soo’s trunk?

The Lee sisters suspected that the mysterious woman in the raincoat might be their father and tried to open their father’s locked trunk. Just when they started carrying it upstairs, they came across Lee Chul Soo and dropped it, causing it to roll down a flight of stairs and land right in front of him. Lee Chul Soo grew furious and kept the trunk in his basement with two locks on it. His daughters asked what was inside the trunk, and he just curtly replied, “You don’t need to know.” Lee Gwang Tae pointed out, “You look more like a criminal because of this. There’s evidence in there, right?” Lee Chul Soo became angry and chased her away, but viewers are eager to find out what exactly is inside that trunk.

The production crew said, “Based on the witness’s statement that the criminal is a woman, the detectives are accelerating the search for the truth behind this murder case. Please look forward to episodes 7 and 8 of the unpredictable stories of the Lee family members that are intertwined from the search for the culprit.”