tvN’s “Vincenzo” has shared another behind the scenes look at the recent episodes!

“Vincenzo” stars Song Joong Ki as Vincenzo Cassano, an Italian lawyer and Mafia consigliere who is of Korean descent but was adopted by an Italian family at a young age. When he moves back to Korea due to a conflict within his organization, he winds up crossing paths with sharp-tongued lawyer Hong Cha Young (Jeon Yeo Been). Together, they join forces in using villainous methods to take down villains who cannot be punished by the court of law.

The making-of video begins with a perilous action scene, which Song Joong Ki’s character escapes with the help of the pigeon Inzaghi. Although the actor easily carried out his action stunts moments earlier, talking to a pigeon prop proved difficult for him. He tried his hardest to hold back a smile as the staff member encouraged him, saying, “You have to get over it.” 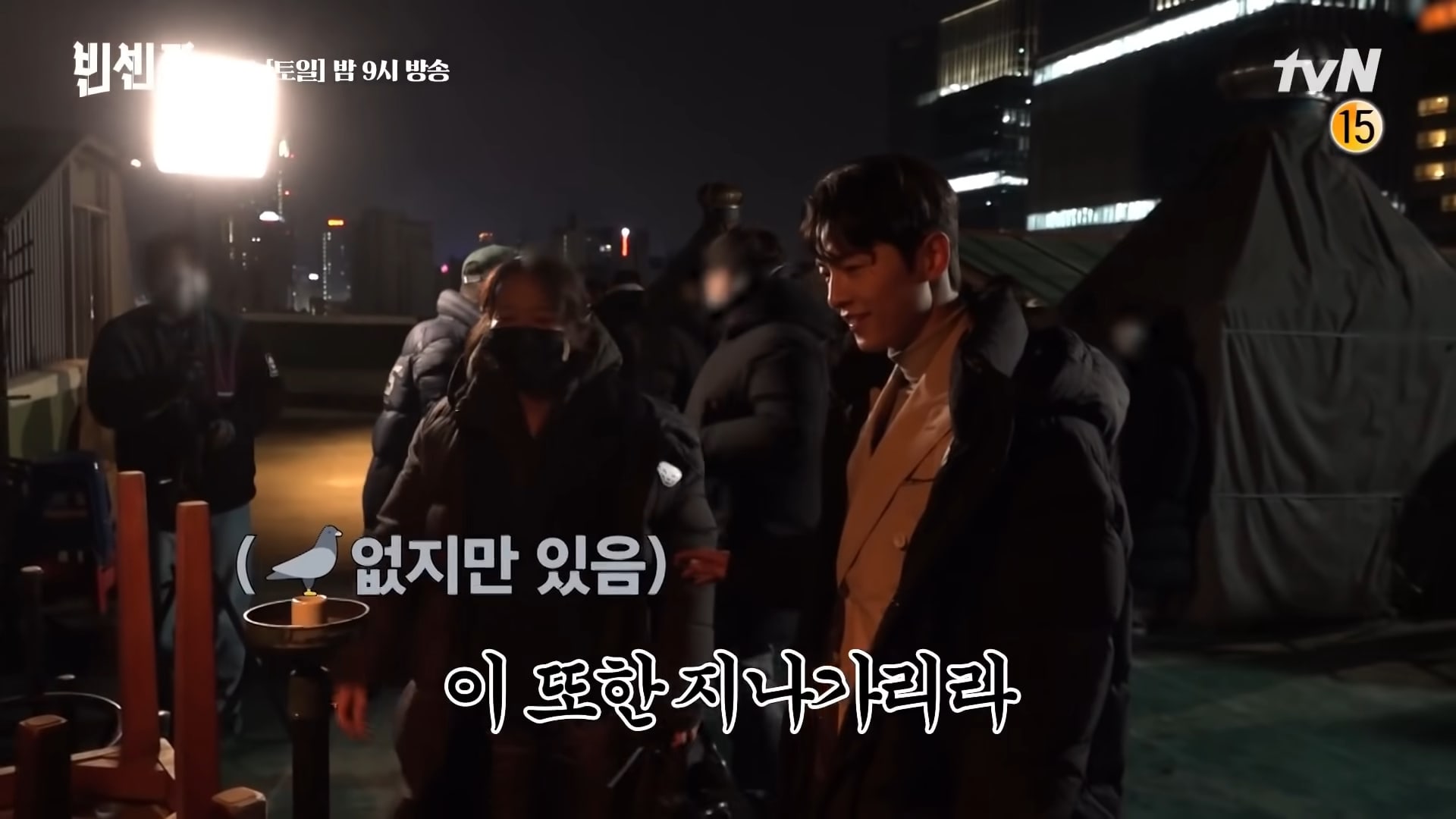 Next, Song Joong Ki gets together with Jeon Yeo Been and Yoon Byung Hee for a scene where Vincenzo pretends to be a shaman. He works hard on his expressions, but the staff member gestures to Yoon Byung Hee as she says, “No matter what you try, you can’t beat him.”

When Jeon Yeo Been enters in her hanbok (Korean traditional clothing), Song Joong Ki can be heard offscreen saying, “You have to do a historical drama. You look so pretty.” Smiling from all the compliments, Jeon Yeo Been bows down playfully in Song Joong Ki’s direction. The comedic atmosphere continues throughout filming as Song Joong Ki becomes possessed and attempts to pull off Jun Jin Gi’s sock, sending them into a fit of laughter when the scene ends. 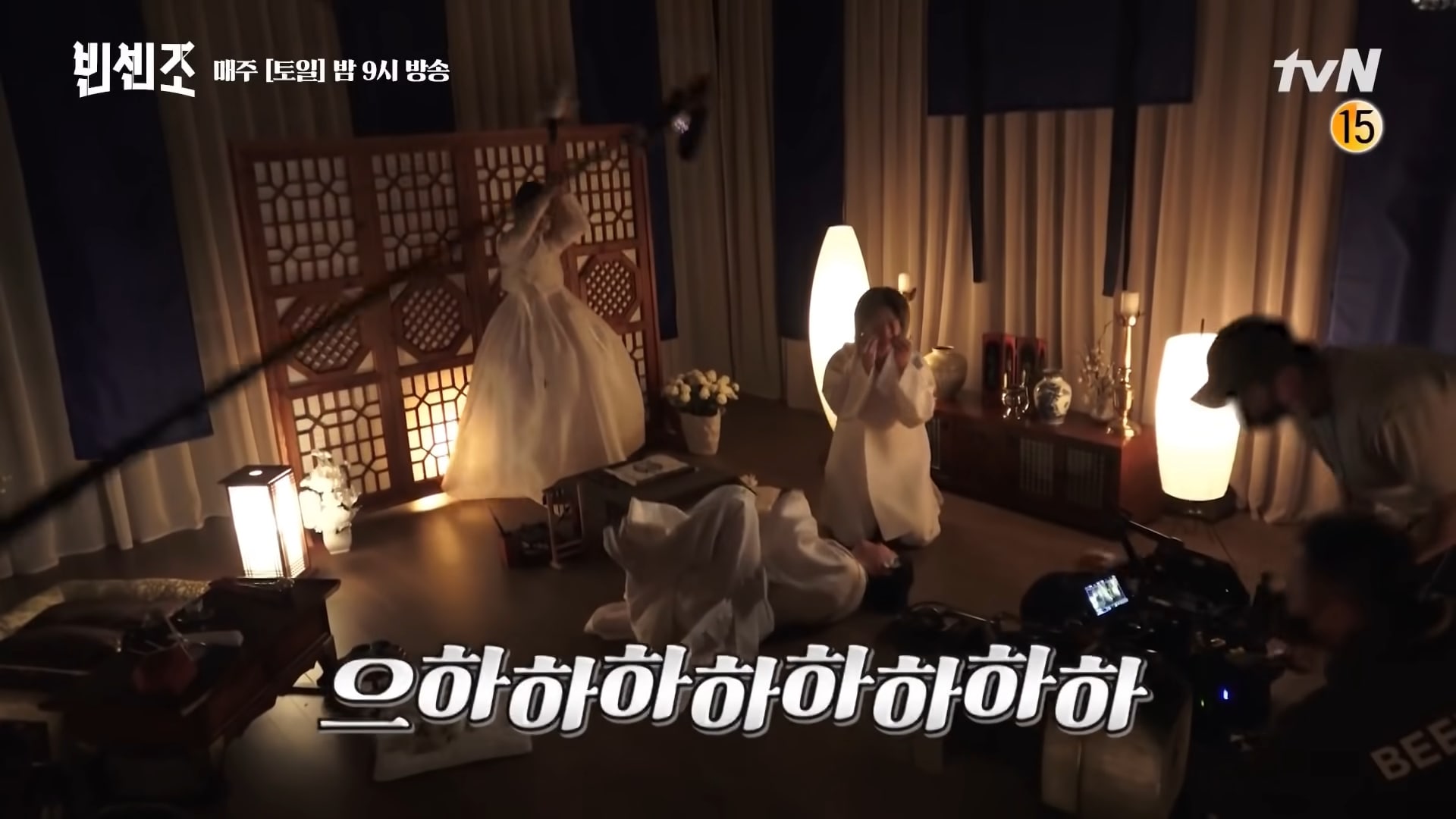 At one point, Jeon Yeo Been gets together with Yoon Byung Hee and suggests they make a heart for the camera. When they both attempt to make their heart a different way, Song Joong Ki jokes, “We’ve done this for seven months and you still can’t get it right?”

Things then get heated up as the Geumga Plaza family get together for a party filled with ad libs and karaoke. When Jeon Yeo Been stands up and suggests they listen to songs from a different country, the entire table begins to chant, “Vincenzo!” After a few arguments, everyone at the table counts down in anticipation for his song. After a pause, Song Joong Ki just says, “I don’t know any foreign songs,” making the entire table double over with laughter. 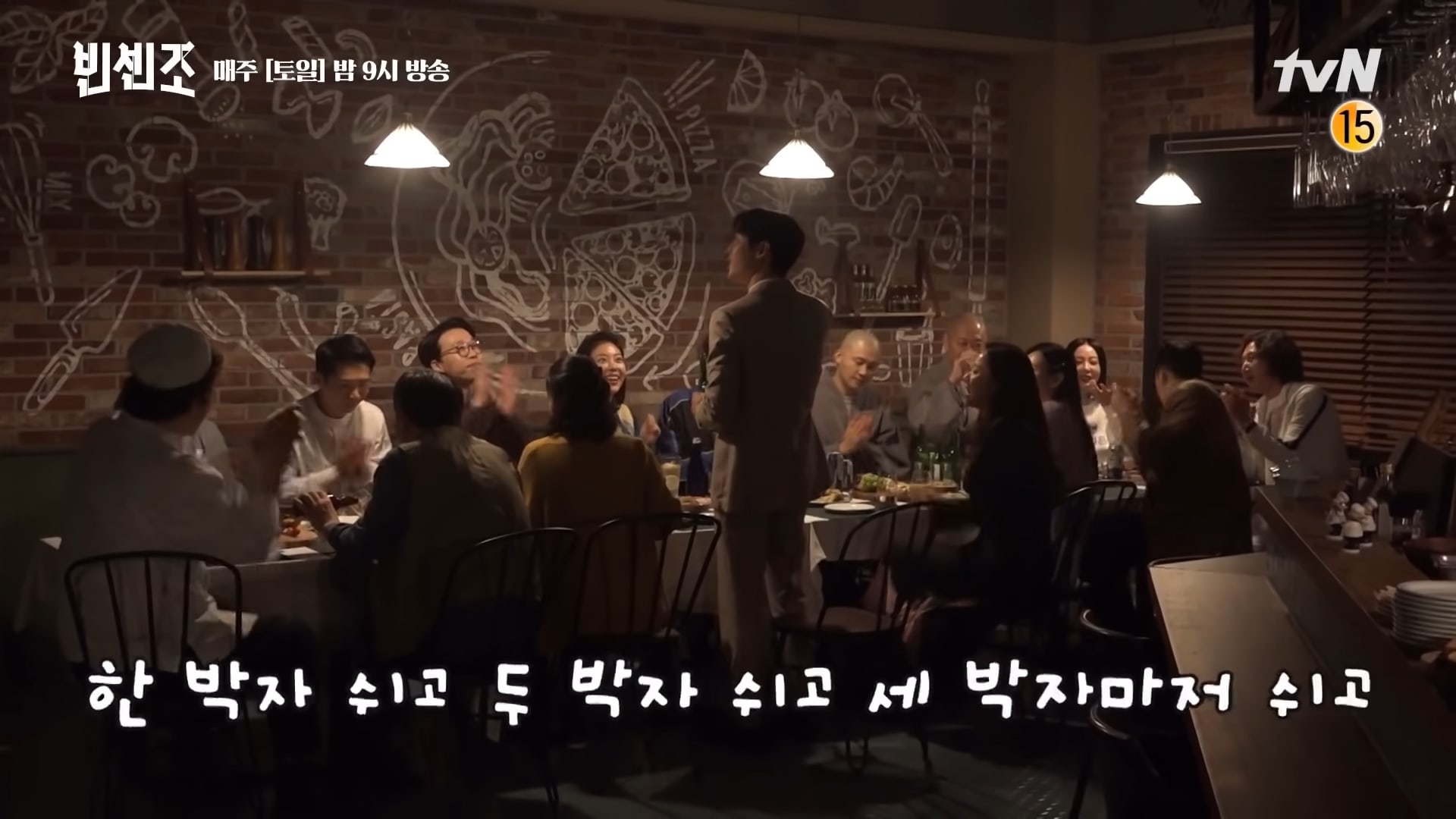 Next up, Song Joong Ki and Jeon Yeo Been pose for a photo shoot with Yoon Bok In, who plays Vincenzo’s mother. Song Joong Ki sheds tears during the following scene, the perfect touch to an extremely emotional scene. Yoon Bok In shares some comments afterwards, expressing her gratefulness for being able to be a part of the drama.

Finally, Song Joong Ki reverts back to his tough and ruthless side as a Mafia consigliere, beating up everyone in his path as his rage over his onscreen mother’s death consumes him. He pays special attention to certain action sequences, making sure to go over the motions one by one with the other cast members before beginning to film.

The next episode of Vincenzo airs on April 24 at 9 p.m. KST.