Song Joong Ki shared some memories during his acting career!

When asked about the first time they stood on camera, Song Joong Ki said, “You wouldn’t say that it was a big role, but I didn’t have an agency back then, and I was just playing extra roles for experience. My college sunbae wanted to help me out, so for the first time, I was given a role with one complete line. As you all know, that’s a really big deal.”

He continued, “That drama was called ‘Get Karl! Oh Soo Jung.’ I didn’t even know what drama I’d be in until I got there. When I arrived, Sung Dong Il was right in front of me. Strangely, I wasn’t nervous. I was just so excited. But that’s when I learned about the reality of drama shooting.”

Song Joong Ki went into the details of his appearance in the project, saying, “I was a nobody who got cast for the role of Reporter 3. The older actors who played Reporter 1 and Reporter 2 dragged me to the corner while [the staff] was preparing for filming. They asked me how I got the role. I didn’t know why they were asking me that. But then later on, I realized that the competition is fierce in that world. I got lucky, and I got the ‘okay’ sign [from the director]. It felt cathartic when I first said a line. I was Reporter 3, which was a small role, but it’s role that takes a huge part of my memory.” 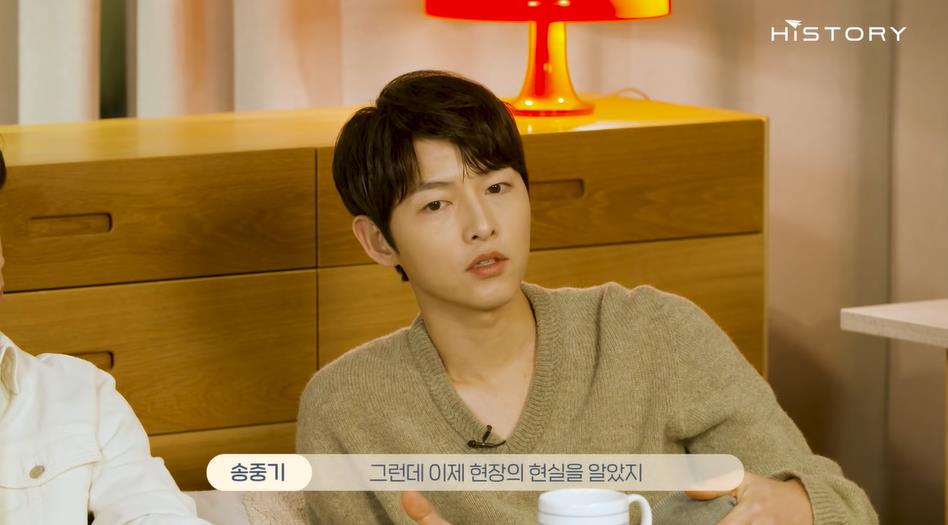 Then while talking about the moments when the actors felt the charms of acting, Song Joong Ki mentioned “Vincenzo.”

In that hit drama, Song Joong Ki played Vincenzo Cassano, an Italian lawyer and Mafia consigliere who is of Korean descent, but was adopted by an Italian family at a young age. When he moves back to Korea due to a conflict within his organization, he winds up crossing paths with sharp-tongued lawyer Hong Cha Young (played by Jeon Yeo Bin). Together, they join forces in using villainous methods to take down villains who cannot be punished by the court of law.

Song Joong Ki explained, “There was a scene where Vincenzo went to work the day after his mother passed away, and when he climbed up the stairs, the plaza people were waiting for him.”

He added, “As always, all the actors were in the same sentiment, but I still remember what Seo Ye Hwa’s character said. ‘I’m pregnant, and there’s a baby inside me. But I can still fight, so tell me if you need help.'” He said the line really impacted him because it came from a pregnant character.

Song Joong Ki continued, “Ye Hwa’s take was done, but I still had an emotional scene left, and I could read her efforts. She was trying her best to deliver her energy to me. I could feel it so strongly. So I waited even though my scene was over. I wanted to give her a hug before I left. I felt so grateful for her intentions. It’s those moments that really hit me.”

Check out Song Joong Ki in “The Innocent Man” with English subtitles: