Watch: Kim Hee Sun Is Hell-Bent On Getting Revenge Against The One Who Ruined Her Life In “Remarriage & Desires” Teasers

Kim Hee Sun stars as Seo Hye Seung, an ordinary wife and mother who loses everything due to the sudden death of her husband and jumps into Rex in order to get revenge against Jin Yoo Hee (Jung Yoo Jin), the one who ruined her life. Jin Yoo Hee is a lawyer who will destroy everything in her way in order to get what she wants.

Lee Hyun Wook plays Lee Hyeong Joo, a chairman of a self-made venture company, while Park Hoon transforms into Cha Seok Jin, a professor who is fighting against his stepmother Choi Yoo Seon (Cha Ji Yeon) for the huge inheritance left by his father. Choi Yoo Seon is the CEO of Rex, a top matchmaking agency with its firm logic that “marriage is a business where supply and demand meet.”

The newly released poster features all five characters who steal attention with their stunning attire. Each of them are wearing something black, but Seo Hye Seung takes the cake with her sparkling white wedding dress that has flattering yet eerie black designs at the end. The text on the poster reads, “A scandal of revenge and desire.” 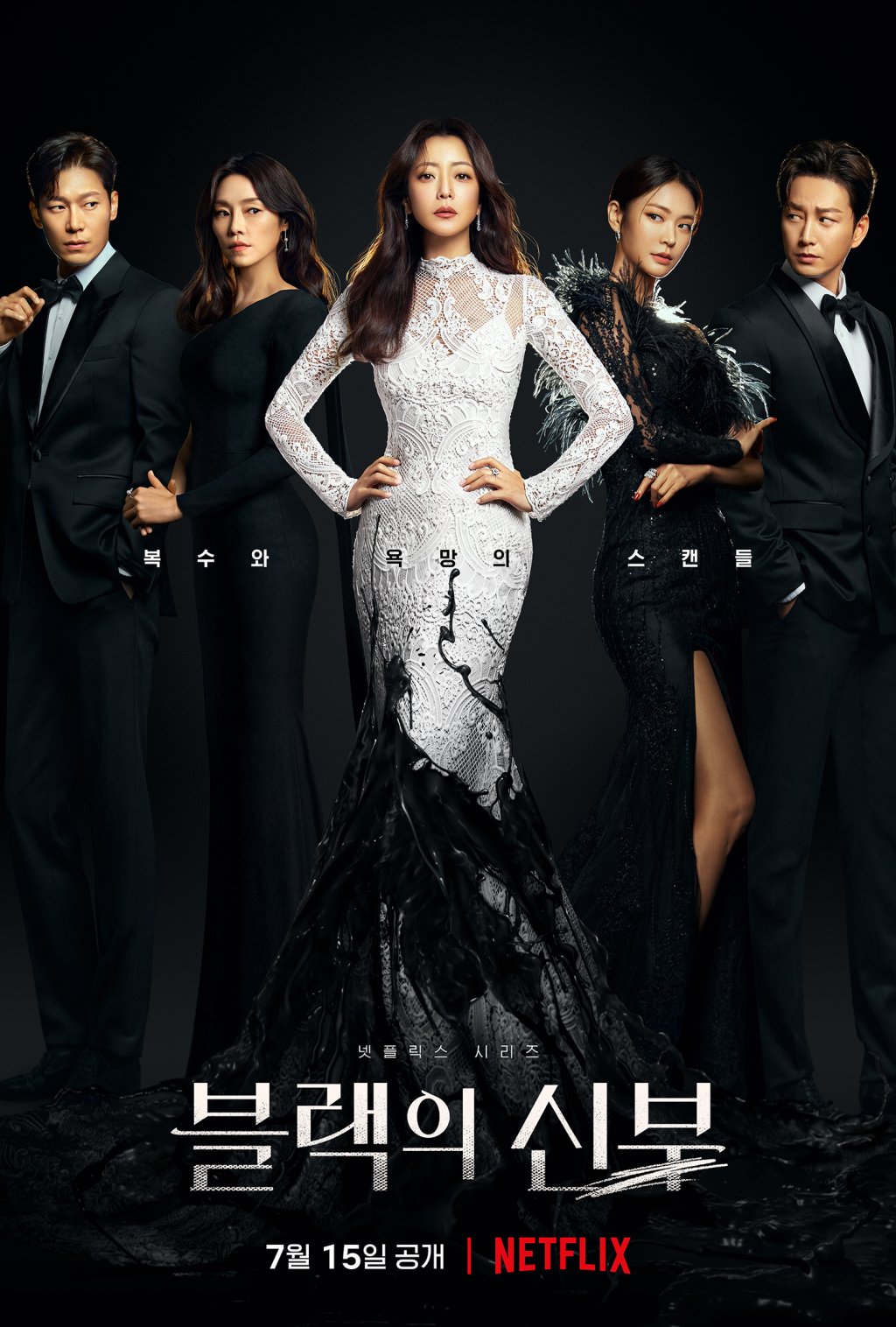 The tantalizing teaser begins with Jin Yoo Hee, saying, “Let me marry a Black Level member.” At Rex, a Black Level member is the most wanted spouse due to the fact that it means they’re the wealthiest. Excitement buzzes at the matchmaking agency when Lee Hyeong Joo arrives, and Choi Yoo Seon describes him as “a new premium item with assets of two trillion won ((approximately $1.5 billion).”

Referring to her greatest nemesis Jin Yoo Hee, Seo Hye Seung claims, “I will never forgive that woman. She’s the one who pushed my husband to his death.” In order to pay Jin Yoo Hee back for what she did, Seo Hye Seung enters Rex to get in the way of her burning ambitions to marry a wealthy man.

Enraged, Jin Yoo Hee demands, “Do you really think you can win against me?” In response, Seo Hye Seung vows, “You’ll never have it your way.” Furthermore, Choi Yoo Seon says, “Mr. Lee Hyeong Joo wants a trophy wife,” and the CEO goes on to say, “I don’t trust women.”

Things heat up as Jin Yoo Hee and Seo Hye Seung’s ill-fated relationship spirals out of control, but Seo Hye Seung stands her ground as she firmly states, “Just wait. I’ll make your life hell. I will never let you get what you want.”

“Remarriage & Desires” will premiere on July 15. Watch the teaser with English subtitles below!