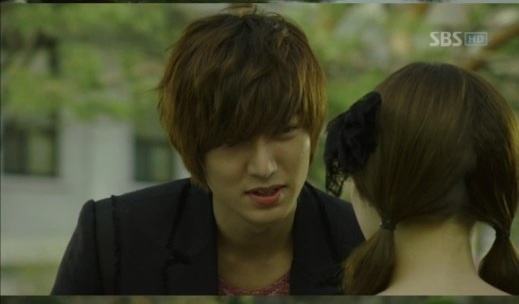 All dressed up since early in the morning, Choi Da Hae blocked Lee Yoon Sung who was on his way to work, and said in a slightly threatening tone “Hurry up and answer that you’ll give me private tutoring lessons.” Lee Yoon Sung cold-heartedly snapped back, “I told you I don’t want to. Not only are you stupid but you also have bad hearing? Are you an orangutan who needs to be told the same thing multiple times in order to understand it?”

However, Choi Da Hae didn’t stop here, begging “If you don’t want to give me private lessons, let’s go on a date,” despite after falling to the ground in front of people as Lee Yoon Sung suddenly opened the car door. Lee Yoon Sung also continued on with his condescending tone, calling her “Hey kid!”

He started laughing when she said “I’ll be turning into an adult quite soon,” and just left after bitterly stating “I understand that kid Da Hae has high standards, but you’re not my type. Would I have to buy you a full-length mirror for you to realize it?”

While it looks like Choi Da Hae has a huge crush on Lee Yoon Sung, it will be interesting to see how their relationship evolves. But aside from the script lines, it’s possible that in reality Lee Min Ho finds Goo Hara attractive, and even might have been slightly jealous when she stated that she likes Won Bin more than him, don’t you think?

Don’t Forget to Check Out the full recap of City Hunter Episode 3!