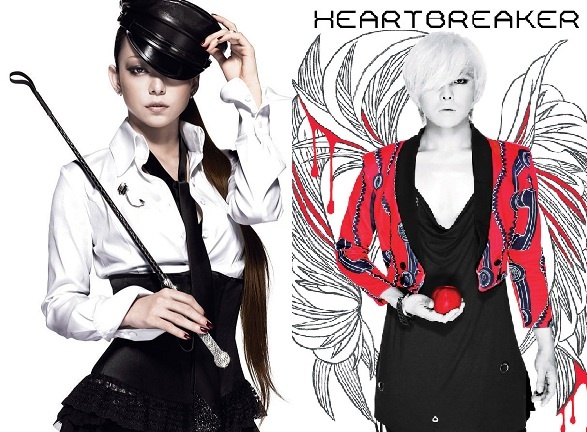 Just two years after being accused of plagiarism, G-Dragon’s 2009 hit single “Heartbreaker” has been involved in yet another plagiarism scandal. Only this time it’s on the other side of the story as Japanese pop diva Namie Amuro is accused of copying G-Dragon’s solo debut track.

According to Japanese media, fans in Japan are currently questioning whether Namie Amuro’s upcoming single, “Sit! Stay! Wait! Down!” has copied the beats of “Heartbreaker.” If you compare the two songs, there is a common synthesizer sound in the background, but it’s hard to tell if they follow the same exact beat and notes.

In the past, Namie Amuro’s “Black Diamond” was also accused of plagiarizing Janet Jackson’s “Feeback.” Ironically, “Heartbreaker” was also part of a plagiarism scandal in 2009 for allegedly copying U.S. rapper Flo Rida’s “Right Round” – only to be freed from charge after Flo Rida himself came out and said they’re not plagiarized. Flo Rida later performed the song with G-Dragon on the same stage, completely erasing any doubts that might have remained after the scandal.

Namie Amuro’s representatives have not responded to any of the allegations yet. On November 6, she had to be sent to the hospital after experiencing a sore throat during her nationwide concert.

Here are the two songs for you to compare. Is it a legitimate accusation?

Thunderstix is the Editor-in-chief for soompi.com. You can email him at eugene@soompi.com, or follow his twitter.com feed at @eugenekim222.
G-Dragon
Namie Amuro
How does this article make you feel?