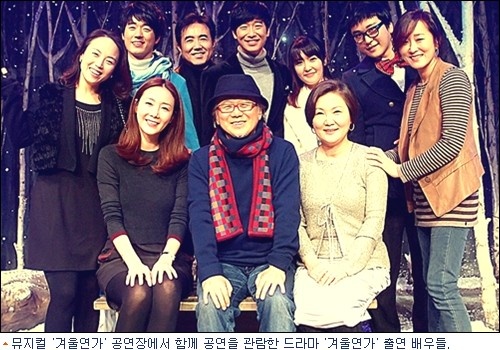 Original Cast of "Winter Sonata" Are Touched by Its Musical Adaption

Time has flown by. It has already been ten years since the immense popular drama “Winter Sonata” aired its very first episode on January 14, 2002. To celebrate its grand anniversary, the original cast of the drama had gathered on the musical stage of “Winter Sonata” on January 14, 2012. Not only Choi Ji Woo, but also Kim Hae Sook, Lee Hye Eun and Park Hyun Sook and all other members were at this gathering.

Actress Choi Ji Woo had seen the musical commented, “From my point of view, as the actress who played the part of Yoo Jin, I was very happy with this musical. It made me feel very good but also emotional. Some parts of the dialogue also made me think about the late Park Yong Ha.” Kim Hae Sook also confessed her emotions by commenting, “Throughout the whole musical, I was reminded of the drama and it made me tear up.”

The director of the drama, Yoon Suk Ho, also expressed his feelings by commenting, “‘Winter Sonata’ is one of the most important things that had happened in my life. To be celebrating the ten year anniversary of something so important to me makes me very emotional. I think this will be a very treasured moment for me in the future.

The musical led by Yoon Suk Ho, will continue until March 18, 2012. The art director of this project is Yoo Hee Sung (who is also known for his projects “Mozart” and “Pimagol Love Song”).