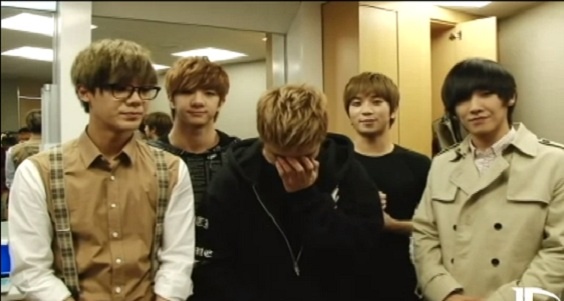 Seungho started by saying, “Finally, our fourth mini album promotions have come to an end,” as he pretended to be breaking down in tears.

G.O. followed up by saying, “We have mixed emotions of joy and sorrow. Because of some of the member’s injuries, a lot of our fans worried about us. We also went through a lot, but we’ve come all the way to our final performance. There has to be an end to have a new beginning, so we MBLAQ will work harder to present you with a much better new album.”

Seungho added at the end, “Also, we have a lot of surprising things planned right now, a lot of new performances, so we hope you continue to show us love and support. We also have plans for an Asian Tour, so don’t feel too disappointed. We are MBLAQ, thank you!”

In case you haven’t seen it already, make sure you watch Soompi’s exclusive interview with MBLAQ here! Stay tune for more updates soon!

G.O.
MBLAQ
Seungho
How does this article make you feel?