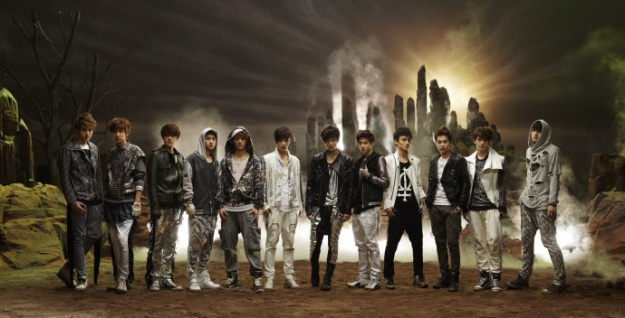 Past photos of SM Entertainment’s new group, EXO, has been revealed and they are garnering a lot of attention. Recently, on an online community board, a posting was made with the title, “EXO Past Photos.” In the post, all 12 EXO-K and EXO-M members can be seen, before they debuted.

The pictures, which were gathered from various fan cafes and Cyworld blogs, was put together into one large photo for the post. Different from their charismatic looks right now, the boys look very young, which is catching the attention of the fans.

Even though past photos have been revealed, EXO, who are known for their striking features and perfect looks, aren’t receiving that much negative responses.

Netizens who saw the photo, commented, “To see them altogether like this shocking,” “All look so young and fresh,” “They look more pure and naive than now,” “Lay used to be a little chubby,” “I can’t tell who is who yet,” “It’s hard to even memorize the members’ name,” and “The fan who gathered all this is amazing.”

On April 8, EXO-K performed on SBS “Inkigayo” with two songs, “Mama” and “History,” off their first mini album. They quickly acquired the attention of the fans and viewers with their powerful, first performance.

Can you tell who is who?

EXO
EXO-K
EXO-M
Lay
Lu Han
How does this article make you feel?