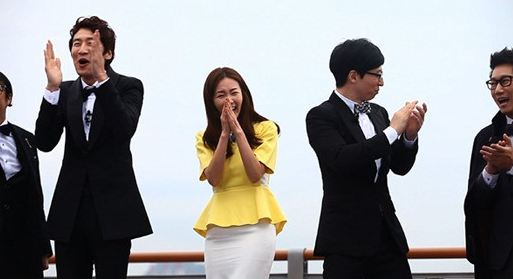 Are you ready for the last episode of “Running Man” for 2012?

It’s been previously reported that Choi Ji Woo will have the honor (or is it the other way around?) of being the last guest to appear on SBS’s variety program “Running Man” for 2012.

Even though the staff wanted to save the surprise until the episode aired, citizens close to the filming site quickly shared their lucky find on their social networking sites and the media picked up on the news in no time.

The pictures of Choi Ji Woo filming for the variety program reveal her special treatment starting from the beginning of the episode. She arrives at the filming site in style and is warmly welcomed by the “Running Man” members after she steps out onto the red carpet.

Many fans of the show are interested in what the staff members have in store for the last episode of 2012.

This episode will be broadcasted on December 30 at 6:10pm (KST).

Choi Ji Woo
Running Man
KPLG
How does this article make you feel?