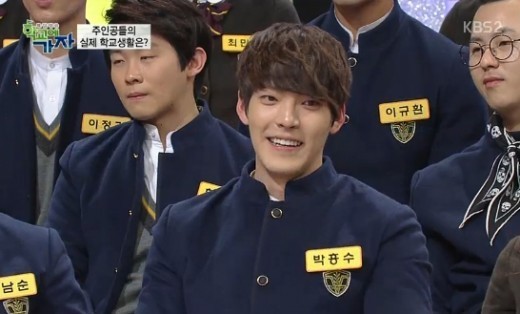 Kim Woo Bin has recently shared a selca of himself with child actress Seo Shin Ae.

On January 31, Kim Woo Bin posted on his me2day, “I met my fellow Sidus HQ family member, ‘senior’ Shin Ae,” along with a photo. Seo Shin Ae had been in Sidus HQ before Kim Woo Bin, thus making her his senior, although she is much younger than he is.

In the revealed photo, Kim Woo Bin is neatly sporting a hanbok and posing with his fellow agency member Seo Shin Ae. Kim Woo Bin’s bright smile and handsome features drew much attention to the photo.

Meanwhile, Kim Woo Bin received a lot of love for his role as Park Heung So in the KBS 2TV drama, “School 2013.”