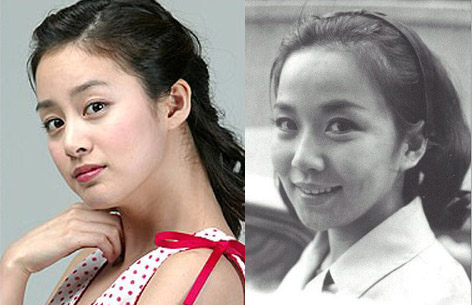 Will Kim Tae Hee look like this in 40 years?

On the February 2 episode of KBS’s variety show “Free Time,” Sa Mi Ja and her daughter appeared as guests and unveiled pictures of Sa Mi Ja during her prime years.

The actress debuted in 1963 as a voice actress in Dong Ah Broadcast and she has been in the spotlight in the entertainment business for the last 49 years. Sa Mi Ja said, “Next year is going to be my 50th year since my debut. If a singer had a 50th anniversary, they would hold a concert. However, actors an actresses do not have something like that. Instead, I will just acknowledge that it has been 50 years in my own mind.”

In the show, Sa Mi Ja pulled out pictures of herself in her past which shows her distinct western facial features. The photos prove that Sa Mi Ja was one of the most beautiful actresses and closely resembled Kim Tae Hee.

Sa Mi Ja added, “The picture was taken after I gave birth to my daughter. At the time, I went to work carrying my baby in the bus. People were giving me weird looks for having a baby at such a young age. Even though I was carrying my daughter and a diaper bag, no one would make a seat for me to sit down until I reached my destination.”

She also revealed an engagement photo with her husband a year before they got married. Sa Mi Ja said, “My husband was a new upcoming actor. I met him while acting at a Catholic Church when I was a middle school student. We had known each other for five years and then started to date. We have now been married for 51 years.”