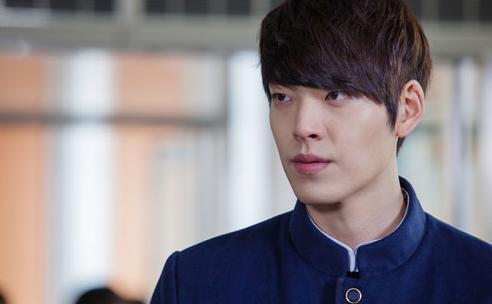 On February 13 at an interview with OSEN, actor Kim Woo Bin revealed his dream co-actress.

When asked who he would like to work with, Kim Woo Bin answered shyly, “I really like actress Shin Min Ah. My favorite quality in a person is a nice smile, and Shin Min Ah has a beautiful smile.”

To Kim Woo Bin’s statement, the reporter said, “I can’t find any obvious similarities between Shin Min Ah and Uhm Ji Won in terms of their appearance.” Kim Woo Bin then explained, “To me, appearances are not very important. It’s all about their charms. When I look back, none of my past girlfriends look similar to each other. I can’t really explain clearly, but I think I am attracted to people who have their own unique appeals.”

Meanwhile, Kim Woo Bin has been praised for his acting skills on KBS’s drama “School 2013,” which aired it last episode on January 26, 2013.