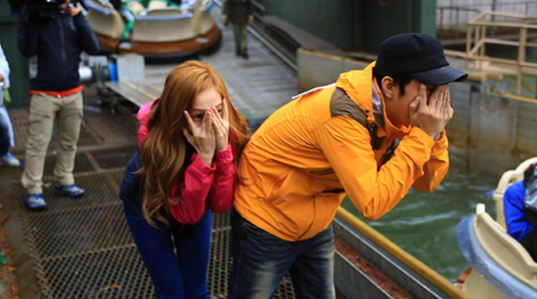 Fans found out that Eun Ji Won and Girls’ Generation’s Jessica will be appearing on the popular variety show “Running Man” when photos of the two filming were uploaded online on April 2. Now we have official stills from the two stars’ guest appearance and Jessica and Eun Ji Won look like they had a lot of fun.

The upcoming episode was filmed at an amusement park with the theme of “Animal Kingdom.” In the stills we can see Jessica and Eun Ji Won wearing animal costume hats, looking quite adorable.

Reportedly, Jessica showed her competitive side while Eun Ji Won was just as strangely funny as he has always been on variety shows. Also, Lee Kwang Soo played up his “giraffe” image for this animal themed episode, making for some hilarious situations.

This episode of “Running Man” will air this coming Sunday, April 14.