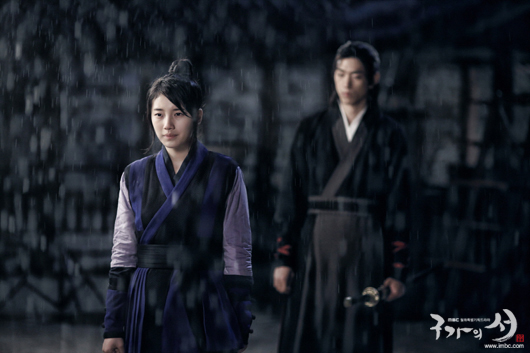 Suzy Cries in the Rain for Four Hours

Despite the spring season, the weather is still a bit chilly in South Korea but Suzy braved the cold for four hours for a sad rain scene that will be broadcasted in episode seven of “Gu Family Book.”

In the previous episode, Suzy’s character Yeo Wool found out the real identity of Choi Kang Chi, played by Lee Seung Gi, who is her childhood love and also her life saver. The truth throws her emotions into turmoil and in the preview stills pictured below, Suzy cries along with the falling rain as she portrays the confusion and sadness that Yeo Wool goes through. The shoot took four hours and Suzy filmed without any NGs, always keeping a smile on her face during breaks.

Sung Joon also joined her in the scene, filming alongside Suzy even when he wasn’t in the camera shot. He plays her loyal and protective bodyguard Gon who is not pleased with any males that come near his lady.