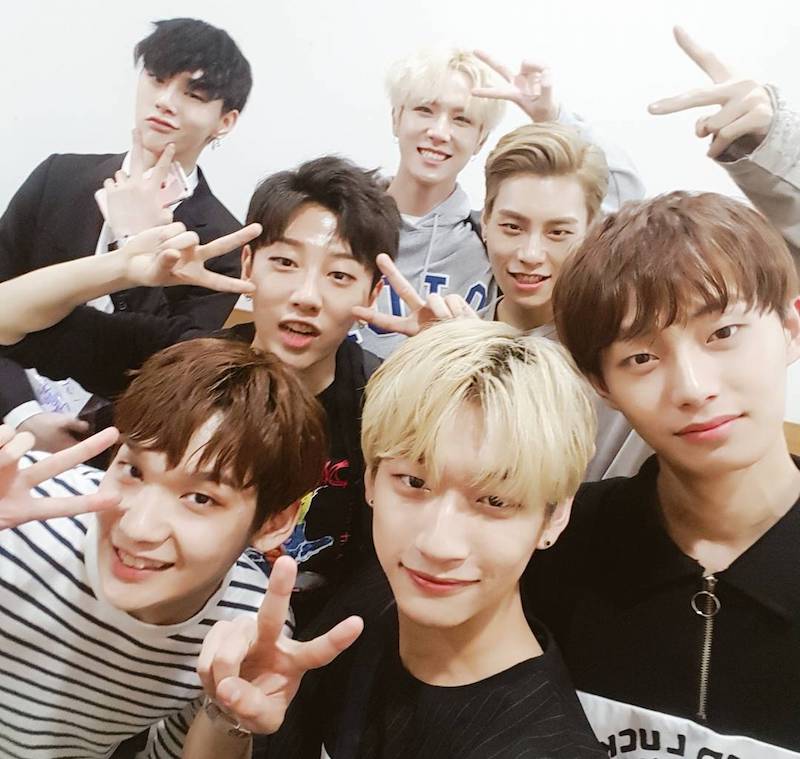 The group “JBJ” might only exist in our imaginations so far, but its members seem to know how much their fans want them to work together!

When the top 20 finalists were announced on “Produce 101 Season 2,” many viewers were sad to see a lot of the show’s talented trainees have to leave. Inspired by the group of eliminated trainees from the first season of the show that formed the temporary girl group I.B.I last year, fans imagined group formations that would allow their favorites to promote together, even if just for a short time.

One of the most popular of these imagined lineups has been JBJ (Just Be Joyful), which features seven of the trainees from the top 35: Kim Yong Guk, Kwon Hyun Bin, Takada Kenta, Noh Tae Hyun, Kim Sang Gyun, Kim Dong Han, and Kim Tae Dong.

When most of the trainees reunited last Friday for the show’s finale, the seven friends in this imagined group took a set of shots together, which many of them shared on Instagram.

The guys of “JBJ” were seated near each other during the live finale, and fans also spotted them grouping together for a big hug!

It looks like the contestants have been staying close, and are taking time to hang out together. On June 19, Noh Tae Hyun shared photos of himself, Kim Dong Han, Takada Kenta, and Kim Yong Guk enjoying some fried chicken by the Han River together. “Han River chicken party!!!!” he wrote in the caption, and tagged the other three.

He posted on Instagram on June 19 with a screenshot of Naver’s fastest-rising search terms chart, which included “jbj” at No. 2. He said in the caption, “Whoa,” and included a wink and a thumbs up.

In a recent interview, Kwon Hyun Bin was asked about this fan-imagined group. “On the day of the live show, I learned about [JBJ] because the other guys told me. I was really amazed,” he said.

“If there is a situation [where we could promote together], it would be really great,” he continued. “We’re all friends and we’re a very close group where we know what each other is thinking.”

When asked if the seven of them took the photo together because they’re aware of “JBJ,” Kwon Hyun Bin replied, “Noh Tae Hyun suggested we take the photo, so we gathered together to take it.”

JBJ was also mentioned to Kwon Hyun Bin in another interview, in which he replied, “I’ve thought about how happy I would be if we debuted like that. We’re all friends.”

After the news on June 19 that Noh Tae Hyun will be making a comeback with his group HOTSHOT soon, some fans have expressed concern that their dream project group might not be able to become a reality. Nevertheless, others have said that it’s not out of the question considering cases of members promoting in two groups at once, such as Jung Chaeyeon being active in both I.O.I and DIA at the same time when their promotions overlapped.

It’s possible that the fan-imagined group JBJ may just be a fun idea that showcases the friendship between these contestants and the ideal combination of their many talents, but even if the dream doesn’t come true, at least the guys seem to be enjoying the idea too!