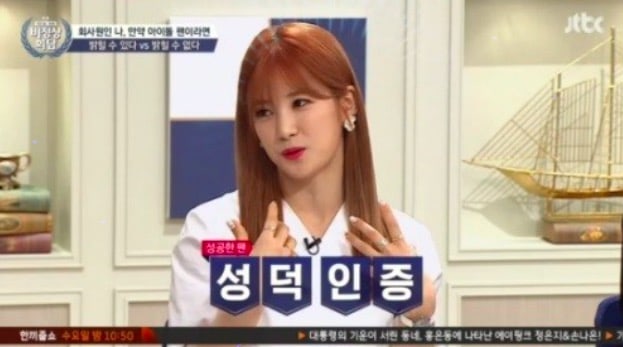 Apink’s Chorong Talks About Being A Huge Fan Of Rain

Apink’s Chorong showed that as much as she has many dedicated fans, she is one of singer Rain.

On the June 19 broadcast of JTBC’s “Abnormal Summit,” Apink’s Chorong and Son Naeun appeared as guests and talked about fandom culture.

During the broadcast, Chorong revealed that she is a huge fan of Rain. When asked how it was to meet him after her debut, she said, “I met him for the first time at his concert backstage after debut. He shook my hand and I almost cried. As a fan, I watched the entire concert from beginning to end on my feet.”

The MCs then asked her mischievously, “Did you ever change the channel on a drama that Kim Tae Hee was on?” and Chorong answered, “Never. When I saw the wedding pictures, I was a tiny bit bitter, but I’m cheering the two of them on.”

Meanwhile, Apink is currently gearing up for a comeback.

Apink
Rain
Chorong
How does this article make you feel?