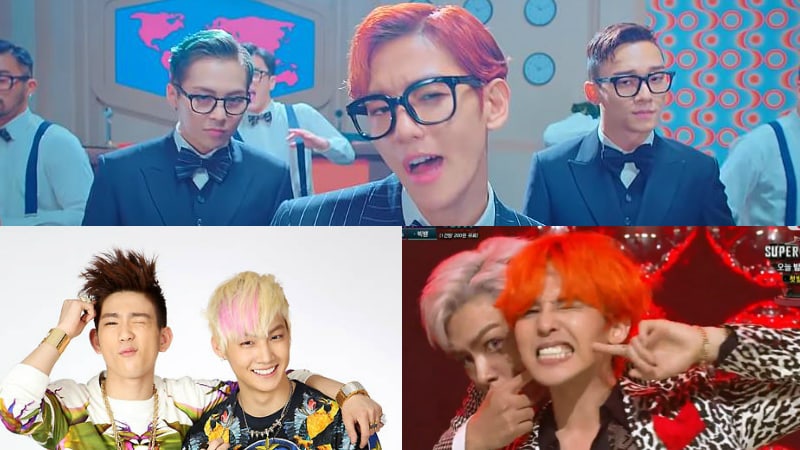 15 Of The Best K-Pop Songs Released By Unit Groups

Ah, unit groups. Although not an entirely novel concept, they are something that has uniquely flourished within the world of K-pop. Whether a unit is derived from an existing group or is a product of a multi-group collaboration, these groups have come out with some great music. As a toast to sub-units and their contribution to K-pop, we present the 15 best songs done by unit groups. Enjoy!

Arguably one of the most successful sub-units, the combination of Taeyeon, Tiffany, and Seohyun is one to be reckoned with. Since all three members have noteworthy vocals, it is only natural that they would slay the sassy, funk-inspired concept that is “Twinkle.” Oh, and did I mention that the EXO boys make an appearance in the music video?

Because SEVENTEEN is made up of three distinct units (vocal, hip hop, and performance), the members have the opportunity to show different sides of themselves through their unit releases. And that’s exactly what their Performance Unit did with this song. Written by the four members and composed by Hoshi, “Highlight” is an electronic, fast-paced track made to show off the members’ dance skills. No matter what style they do, SEVENTEEN does not disappoint.

Contrasting with parent group INFINITE, Hoya and Dongwoo of INFINITE H use their rapping skills to create a more hip hop influenced sub-unit. The combination of Zion.T’s soothing vocals and INFINITE H’s mellow rap makes for the relaxing R&B style track that is “Without U.”

Once upon a time, Hyunseung and HyunA came together to form the iconic unit Trouble Maker. The boy-girl duo wowed many fans with their sexy concept, and it still has a lasting impact on K-pop, even today. Although the chances of them making a new comeback might not be as likely, fans will remember them and their music for years to come.

As a trio of vocalists, EXO-CBX seems to follow a similar path to TTS. However, there is that unmistakable EXO flair that you can feel when listening to the song. “Hey Mama!” is a fun and dance-inducing track that feeds off the playful attitudes of members Chen, Baekhyun, and Xiumin.

Despite the fact that this is I.O.I’s first and only sub-unit, these girls sure hit it out of the park. This song samples Linda Lyndell’s 1963 hit “What a Man” and gives it a modern twist. The music video fully embraces the girl crush concept, giving the song an air of female empowerment.

Even from BIGBANG’s early days, G-Dragon and T.O.P were always collaborating with one another. The two rappers never hesitate to bring swag to any track they touch, and their chemistry is obviously incredible. Watch below as they act alongside one another in the intense, dramatic storyline of the MV.

Seeing as HyunA has been a driving force behind both Trouble Maker and Triple H, she must certainly know what she’s doing. Triple H brings together PENTAGON members Hui and E’Dawn along with HyunA in order to create a strong, charismatic trio. As the title suggests, the song “365 Fresh” is lighthearted and fresh, which contrasts the dark themes in the music video.

First gifting us with “Zero For Conduct” in 2015 and then “Make It Rain” in 2016, BASTARZ has held up the pride of Block B by releasing such lit songs. U-Kwon, P.O, and B-Bomb never cease to impress.

Whether we’d like to admit it or not, this is one of the quirkiest music videos to ever grace the K-pop industry. However, that is not meant to dismiss Orange Caramel’s impact. The lyrics are well worth looking up, and the live performances are engaging as well. And if you’ve ever seen a video of three girls screaming “HA!” you have Orange Caramel to thank for that too.

What do you get when you put VIXX’s Leo and Ravi together in a unit? Simply put, magic. “Beautiful Liar” is a rap-infused ballad that could very well have you crying by the end of it. The music video concept is simple yet artistic, showing the two members as the conflicting forces of light and dark.

If the title of the song doesn’t jog your memory, I’m sure that the dance will. The fact that Hyorin and Bora managed to body roll to this easygoing song is a marvel in itself. Before you know it, “Ma Boy” will be stuck in your head, even if you don’t know any of the lyrics.

Even though technically every NCT song is a unit song by the very nature of the group, I have to say that ‘The 7th Sense” is one of their best. “The 7th Sense” is a chill, trap-inspired song that is more experimental than what is commonly seen in the idol world. NCT U is a sub-unit that many fans enjoy and eagerly await the return of, but unfortunately they have had no releases since their debut last year.

With this whimsical and bright music video, AOA Cream will draw you in only to get you hooked on the song without you even realizing it. Yuna, Hyejeong, and Chanmi work both their literal and figurative magic on the boy they have their sights on, who happens to be played by SF9’s Dawon. Having already debuted AOA Black and AOA White, AOA is experienced with unit groups and knows how to showcase their charms in various ways.

Before there was GOT7, there once existed a legendary duo called JJ Project. The song is…interesting, to say the least. Even if “Bounce” isn’t entirely your taste, the MV is worth watching just to see JB and Jinyoung with those hairstyles.

How many of your favorites made the list? Which songs do you think are missing? Let us know your thoughts in the comments below!