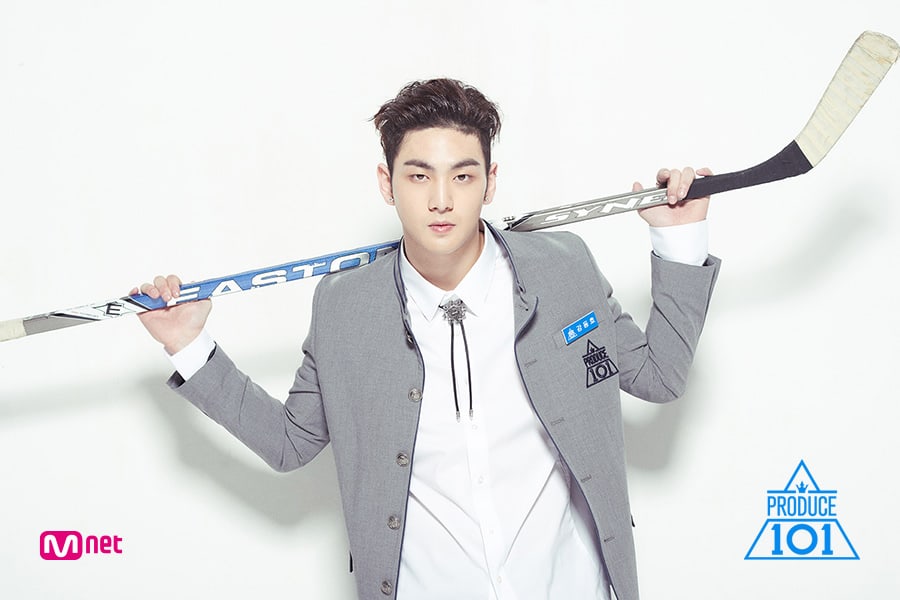 On June 22, an internet community user claimed that she was sexually assaulted by NU’EST’s Kang Dong Ho when they were in middle school.

She began by revealing that she had posted about this back in May, but at the time, she was criticized for lacking evidence. She had deleted the post, but to prove that she had written it, she posted a screenshot of an email she had sent to Pledis on May 13. The email contains a link to the now deleted post and asks for Pledis’s feedback.

Explaining why she decided to reveal this now, she said, “At the time, Kang Dong Ho was not as popular as he is now, and he mostly promoted overseas, so I had not been hearing about him through the press or through other acquaintances. But recently, as Kang Dong Ho gathered attention through ‘Produce 101,’ I had to see him on TV and on social media like Facebook. News about him continued to come up, and I had to live in pain everyday. I was angry that I had to go through this, and I posted on [the community] despite being unprepared.”

After she took her previous post down, her friend arbitrarily wrote on her university’s internet community about the alleged sexual assault in an attempt to help her. The alleged victim decided to create this most recent post to clarify the ambiguous details from her friend’s post.

She wrote, “Eight years ago, in the winter of 2009, I was in my first year of middle school and Kang Dong Ho was in his second year. We were returning home after lessons at a private educational institute, and I was sexually assaulted by him on the bus.”

She gave a detailed account of what happened, saying, “At first, he sat next to me, saying ‘It’s cold,’ and grabbed my hand. I was suspicious, but he was a close acquaintance, so I smiled and said, ‘I’m cold too!’ The bus took off, and he put his bag on my lap. I thought he was telling me to hold it for him, but he touched my thigh. I was extremely taken aback and confused, but my younger self couldn’t say anything because I was scared that the other students on the bus would think I’m strange. He touched my breasts over my school uniform, and then he touched the inner part of my thigh. I was unable to say anything out of fear, and all I could do was press my legs together. Then Kang Dong Ho put his own leg on mine to force my legs apart. He started touching my thigh again and touched my genitals over the stockings I was wearing. He moved his hand up to my waist and put it inside my stockings to touch my genitals over my underwear, and then he put his hand inside my underwear and touched my genitals. When it was my turn to get off the bus, he waved his hand at me, smiling, and said ‘Bye.’ I can still remember that moment clearly.”

She then explained that her family and Kang Dong Ho’s family had been close ever since she was born. She asked her mother to contact Kang Dong Ho’s mother to receive his phone number, and she sent him a text on June 19 at 10:23 p.m. KST. 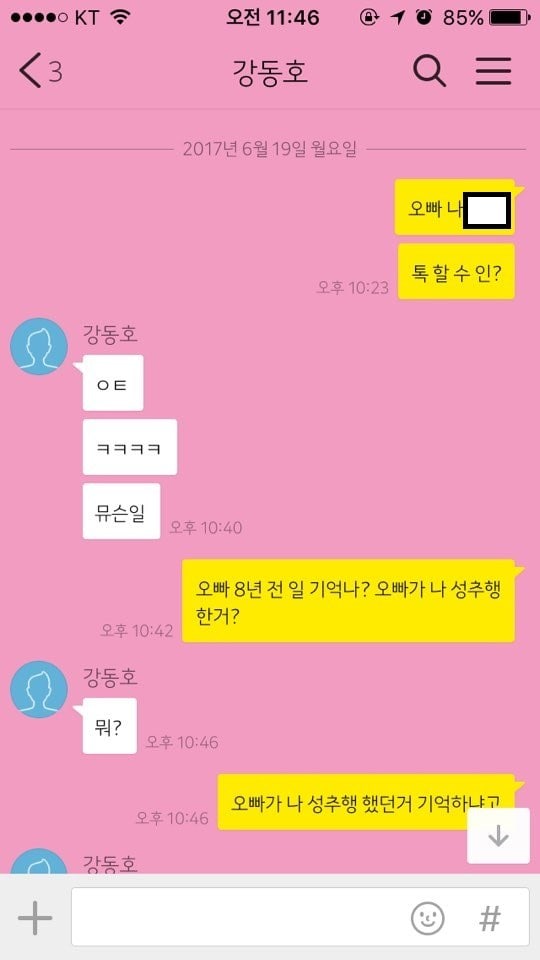 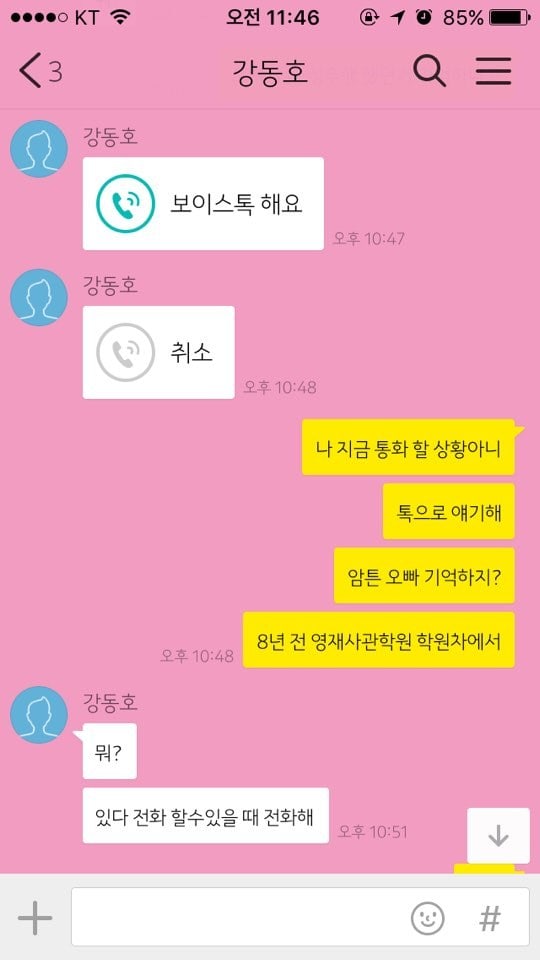 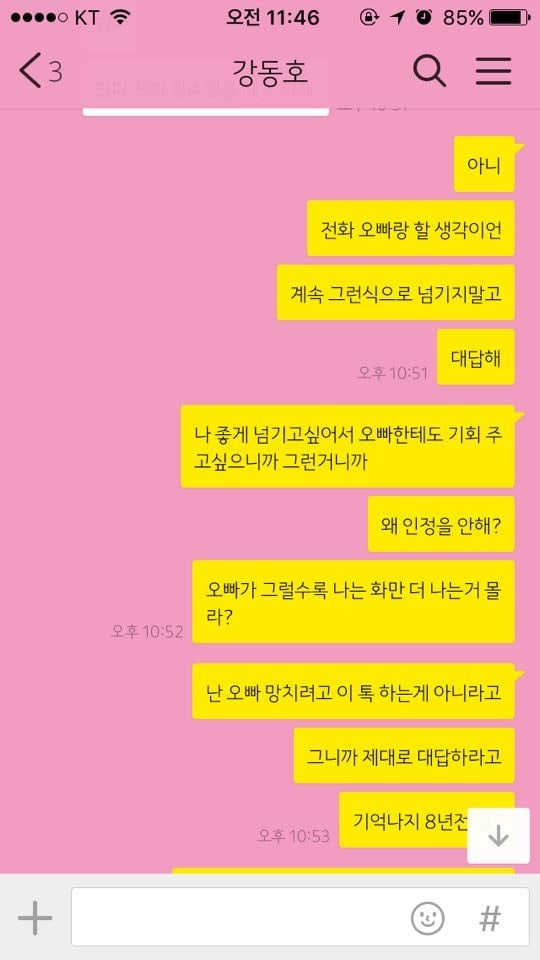 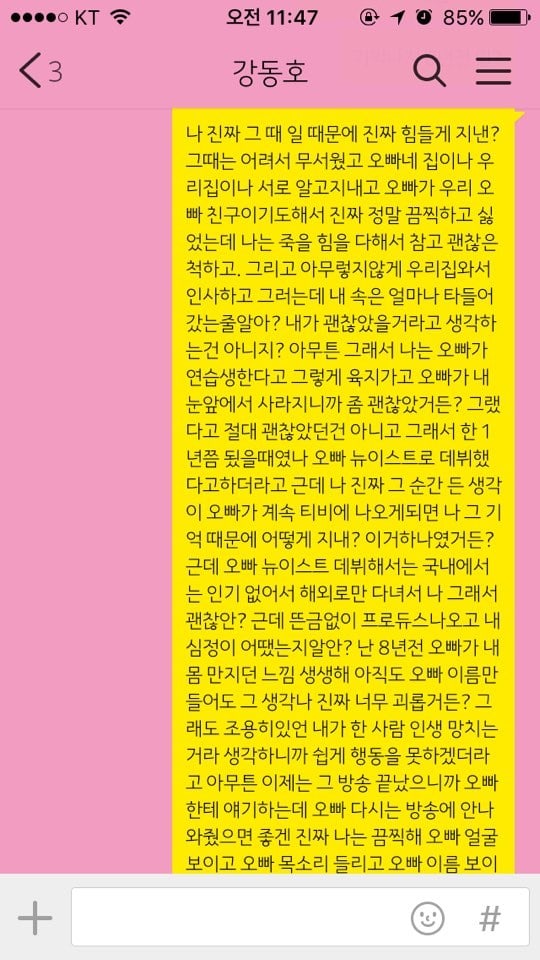 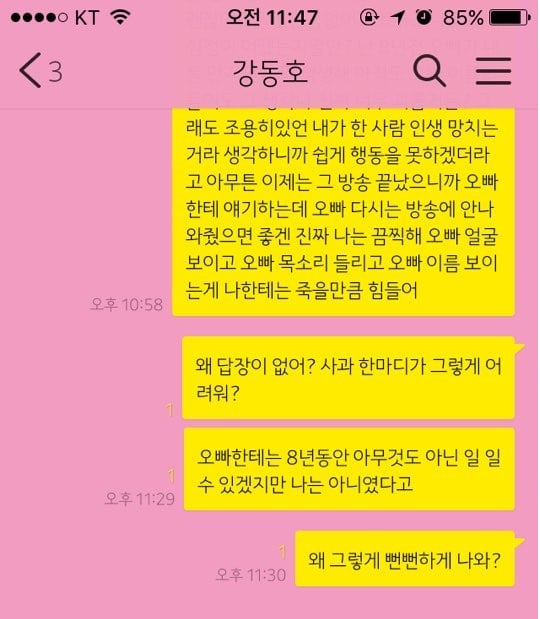 Below is a translation of their text message exchange:

“A (Accuser): Hey this is [censored name]. Can we talk?
“B (Allegedly Kang Dong Ho): Okay. Haha. What’s up.
“A: Remember what happened eight ears ago? When you sexually assaulted me?
“B: What?
“A: I’m asking if you remember when you sexually assaulted me.
“B: [Sends phone call/Cancels]
“A: I can’t talk on the phone right now. Just text me. You remember, right? Eight years ago inside the bus for our private educational institute.
“B: What? Call me later when you can.
“A: No, I have no intention to talk to you on the phone. Stop avoiding the topic and answer me. I want to clear this up nicely, so I’m giving you a chance to do so. Why don’t you admit it? If you continue to do that, it just angers me more. I’m not trying to ruin your life, so answer me properly. You remember what happened eight years ago, right? I had a really hard time after that. I was young at the time, so I was scared, your family and my family know each other, and you’re my brother’s friend so I persevered and pretended to be alright even though it was dreadful for me. Do you know how painful it was when you visited my house and said hello? You can’t be thinking that I was fine, right? So when you left for Seoul to become a trainee and got out of my sight, it got much better. I wasn’t completely fine, though. About a year later, I heard you debuted as NU’EST, and the thought that came to mind was, how do I endure that memory if I keep seeing you on TV? But you weren’t popular in Korea and mostly promoted overseas so it was okay. You know how I felt when you suddenly appeared on Produce? I still remember that feeling when you touched me eight years ago. Just hearing your name makes me remember. It’s really painful, you understand? But I still stayed quiet. I couldn’t act hastily, knowing that I’d be ruining someone’s life. I’m telling you now that the show’s over, but I don’t want you to appear on TV again. It’s extremely painful for me, seeing your face, hearing your voice, and seeing your name.
“A: (Unread by B) Why aren’t you replying? Is it that hard to apologize? It might have been nothing for you during these eight years, but that’s not how it is for me. Why are you so shameless?”

When Kang Dong Ho did not read her last text messages, she decided to call him. She uploaded a video of her attempting to talk to him on the phone. The person on the other side of the call repeated, “I’m busy,” “I’ll call you later,” and “I’m not avoiding you,” for three minutes and hung up.

This internet community user’s statements have not been proven to be true, but several netizens are recognizing the voice in the phone call as Kang Dong Ho’s.

Currently, Kang Dong Ho’s agency Pledis Entertainment’s response is as follows, “We are taking legal action against false rumors and malicious slander, comments, posts, and the dissemination of the aforementioned things. In addition to this, we will take strong action against all other unlawful acts.” They will be releasing a more thorough statement soon.

This article has been modified to include information about the alleged victim’s previous post in May.

NU'EST
Kang Dong Ho (NU'EST)
How does this article make you feel?