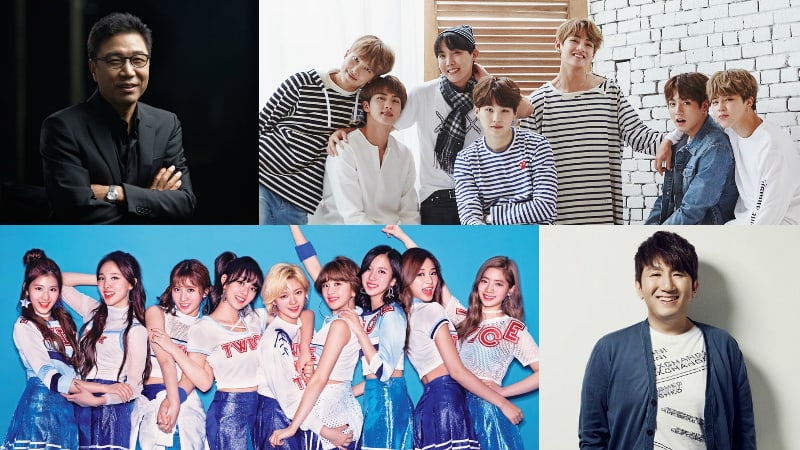 Media outlet Sports Seoul has surveyed executives from 32 entertainment agencies on the most influential people in K-pop.

The survey was conducted from June 8 to 15, and each participant wrote their votes for the top three in four different categories. Each first place answer got three points, second place got two, and third place got one. With this format, the total score for each category was 192, and the highest that an individual or group could get was 96.

Check out the results for each category below!

Lee Soo Man of SM Entertainment topped the list as one of the original key figures in leading the K-pop wave across the world with groups like TVXQ, Girls’ Generation, Super Junior, SHINee, and EXO. Yang Hyun Suk and Park Jin Young of the other “big 3” agencies YG Entertainment and JYP Entertainment also ranked high, while artists BTS and G-Dragon also made the list.

BTS placed first for best male K-pop group, having received significant recognition with various records and awards worldwide including the Top Social Artist award at the Billboard Music Awards. EXO and BIGBANG took second and third with their long-lasting influence and popularity in the industry. SEVENTEEN placed fourth, while Wanna One from “Produce 101 Season 2” placed fifth with the explosive attention they have been receiving even before debut.

TWICE took an overwhelming lead in the girl group category, receiving 93 points out of the 96 possible if all 32 executives had placed them first. The group has shown continuous success in diverse areas including digital charts, album sales, and YouTube views. GFRIEND and BLACKPINK took second and third, respectively, also reigning on digital charts with each release. In fourth, Girls’ Generation showed the power of their longevity amidst all the other groups on the list that debuted less than three years ago. Their agency juniors Red Velvet finished out the list in fifth place.

The following executives of 32 entertainment agencies participated in the survey (note that “Entertainment” has been omitted from agency names for ease of reading):

What are your thoughts on the results?