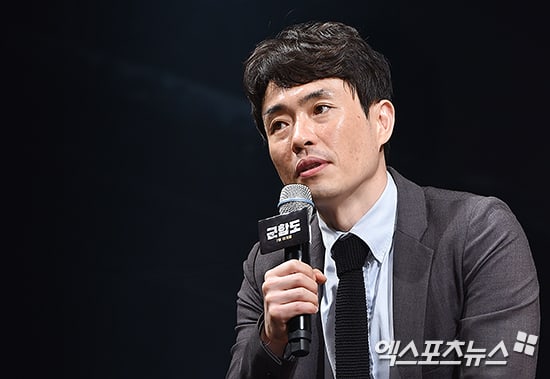 Earlier this week, a media outlet reported that extras had been working in unfair conditions on the set of the film “The Battleship Island.” In an opening showcase for the film on June 26, director Ryu Seung Wan spoke up about his respect and gratitude for all the actors that participated in his movie.

The film tells the historical story of 400 Joseon workers in forced labor on the island of Hashima. Ryu Seung Wan said, “If you look at the photos from the time, you can see how bad the food problem was by how skinny the people were. Not only the Joseon workers, but the Japanese workers as well. There were not enough supplies. It was hard to recreate that kind of reality.”

He continued, “In general, we referred to them as supporting actors and not as extras. Even the 80 actors who were too far away to see clearly, we cast ahead of time. Everyone went through a hard time on set. The main actors and supporting actors all had to control their food intake and they couldn’t eat a lot of carbohydrates or sweet things.”

“Over 7000 people worked on this movie and they all suffered,” he said. “But there was a scene with a medical examination and everyone willingly took off their shirts to film. I was touched by their work ethic. Although they were handicapped by the circumstances, I was sometimes surprised by what the actors could do. In the scene with the Joseon draftees, the moment we said, ‘Shoot,’ a hundred people would shout in unison.”

He added, “There are actors who appear more times onscreen than Hwang Jung Min. There are 38 people who appear from the beginning to the end of the film. After the movie ended, I thanked them and said that we wouldn’t have made it here if it wasn’t for them. All of them put a lot of work into the film. It would have been better if I could have made things easier for them, and I have a lot of regrets about the parts where I was lacking, but I deeply respect them for making this film a good production.”

The film will premiere in South Korea on July 26.

Ryu Seung Wan
XPN
The Battleship Island
How does this article make you feel?