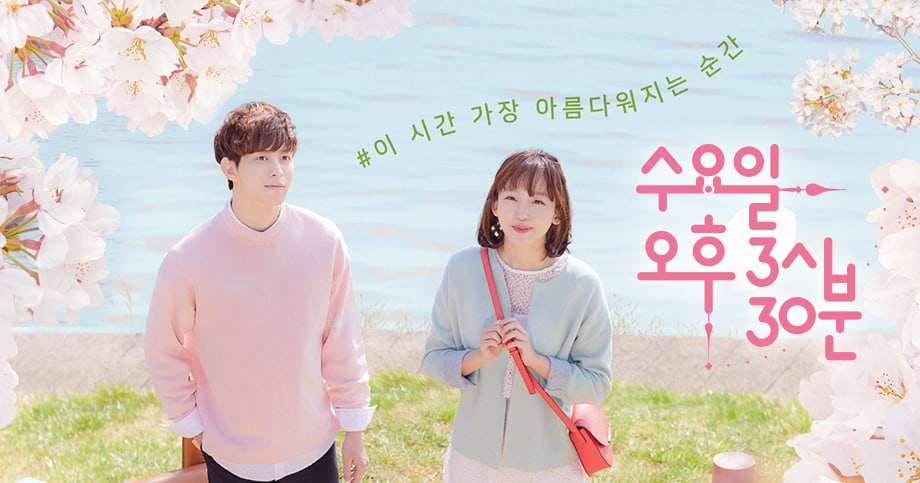 Are you looking for a sweet and lighthearted K-drama to watch? You are at the right place!

“Wednesday 3:30 PM” is a web drama series that revolves around Seon Eun Woo’s (Jin Ki Joo) love life. After getting dumped by her boyfriend, Eun Woo is trying to get him back with the help of her longtime childhood friend, Yoon Jae Won (Hongbin). The duo enters into a fake relationship to make the ex-boyfriend jealous, and the drama tells us how they operate their project called “Wednesday 3:30 PM.”
Here are some reasons to check out this drama!

Do I really have to say more? VIXX’s Hongbin is finally back on screen, and this time, he embodies the perfect boyfriend. Jae Won is the dorky “boy next door” type of guy, except he actually moves in with Eun Woo after his coffee shop burns down.
He is all beautiful smiles and sunshine (bless Hongbin’s dimples, seriously), but he can be mischievous from time to time, too. Hongbin portrays the character with the perfect amount of cuteness and sass and makes it almost impossible not to fall for him and Jae Won as well.

Best known for her role in “Splash Splash Love,” Jin Ki Joo plays the main character, Seon Eun Woo. We get to know Eun Woo right after her break up, and it’s pleasing to see the girl getting her confidence back. She shows us how to be strong after a heartbreak, but she also lets her guard down and is not afraid to express her emotions.

… aka the power of social media.

Eunwoo’s break up happens on a Wednesday at 3:30 PM, the time of the week when women are supposedly the least attractive. Hearing Eunwoo’s story, Jae Won decides to set up a lovestagram project for her: he’s taking the girl on small dates every Wednesday, and they post a photo of a very lively and stunningly beautiful Eunwoo at 3:30 p.m. sharp.

The project makes both of them happy and brings them closer to each other, while the ex-boyfriend is getting more jealous than ever. It’s worth noting how much social media influences their real-life interactions, but it’s so easy to get lost in the playful world of “Wednesday 3:30 PM” with the creative hashtags and the adorable dates, which are literally #relationshipgoals.

The chemistry of the lead couple is the real selling point of the mini series! From the very first episode, we are waiting for Eun Woo and Jae Won to realize their feelings for each other and become a couple. Their everyday banters, the subtle flirting, the dates they go on as best friends… we all are dizzy with their oblivious love. Cute interactions, hidden smiles, and longing stares make us believe that fake relationships can turn into reality.

“Wednesday 3:30 PM” was shot at beautiful locations, and we can’t help but want to feel like lovebirds in spring, walking through a park with blooming cherry blossoms all around! It’s our picture-perfect fantasy, and it’s somehow so satisfying to watch the characters living our romantic dreams!

What makes every movie and drama even cuter? Yes, animals. Jae Won adopts a perky white puppy for Eun Woo as they found a similar dog together in their childhood. After getting into a fight about whether they should name the pup after girl group members or famous drama actors, they decide to raise the dog together, and it results in the most adorable moments ever!

If your heart is ready for a lovely romance between two childhood best friends, freshen up with “Wednesday 3:30 PM” this summer!

When she’s not studying or working, fanniberger spends her time obsessing over K-pop groups, binge watching dramas and variety shows, doing quizzes, or going to K-pop themed parties with friends. Say hi to her on Twitter!
P.S. She might be a tiny bit biased when it comes to Hongbin!