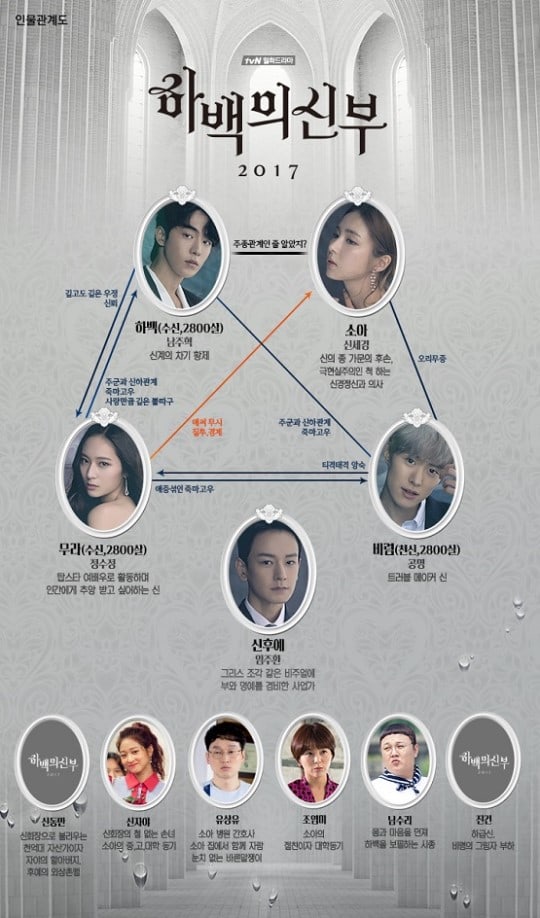 On June 30, tvN unveiled a map of the complex character relationships on their upcoming fantasy romance, “Bride of the Water God.”

The story revolves around two central characters who each represent a different world: Nam Joo Hyuk from the world of the gods and Shin Se Kyung from the world of humans. Nam Joo Hyuk plays the water god Habaek who finds himself in the human world in 2017, while Shin Se Kyung plays a neuropsychiatrist named So Ah whose fate is to serve the gods. In the map, the relationship between them simply says, “You thought they were just a master and servant, right?”

Habaek’s brief character description also reveals that he is 2800 years old and a god that can take the form of animals, as opposed to a heavenly god. He is also described as the next king of the gods.

f(x)’s Krystal plays Moo Ra, a goddess who is living in the world of mortals as a top actress. She is the same type of god as Habaek and the map reveals that he feels a deep and lasting friendship for her while she treats him as both a childhood friend and a liegelord-vassal relationship that goes “almost as deep as love.” Her character description states that she is 2800 years old and seeks worship from human beings. Her relationship with So Ah is described as “trying to ignore her with an effort, jealous, and wary.”

Finally, there is Im Joo Hwan, who plays Shin Hoo Ye. He has no relationship ties to anyone else and is described as a businessman with a face from the gods.

Remaining supporting characters also have no relationships mapped out but are accompanied by short character descriptions. Nam Soo Ri (played by Park Gyu Sun) will be the comedic relief character who throws himself into waiting on Habaek hand and foot as his attendant, while Yoo Sang Yoo (played by Shin Jae Hoon) is a nurse at So Ah’s hospital with no sense of tact and too-blunt honesty. Choi Woo Ri plays So Ah’s best friend, Jo Yeom Mi. Shin Ja Ya is So Ah’s former schoolmate, while Shin Dong Man is her wealthy grandfather and uncle to Shin Hoo Ye. Jin Gun is described as a mysterious “lower-ranked god” who is Bi Ryeom’s subordinate and shadow.