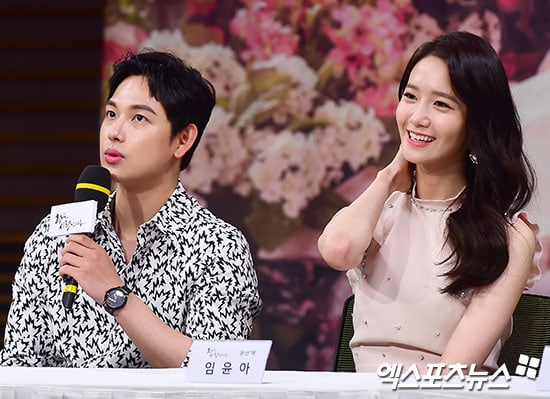 On the afternoon of July 3, a press conference was held for the upcoming MBC Monday-Tuesday drama “The King Loves,” starring Girls’ Generation’s YoonA, Im Siwan, and Hong Jong Hyun.

Im Siwan and YoonA, who both kicked off their careers in K-pop, spoke a bit about their acting careers. Im Siwan said, “Just as I started to think more about whether I was someone that this entertainment industry needed, I — thankfully — got into acting. Many people applauded what I was doing, which gave me confidence, and as a result, I continued acting. Even with just that, I’m so thankful.”

The actor continued, saying he’s doing his best to keep up with his senior actors in the industry, and named YoonA as one of those seniors he’s trying to keep pace with.

In response, YoonA laughed, saying, “What do you mean? Though it’s been 10 years since I debuted, I haven’t done many projects as an actress. There’s still a lot that I have to do and a lot I have to show. In my opinion, Im Siwan is the best acting idol, and I’m so happy to have been able to work with him. There was a lot I learned from seeing his energy. And he was even invited to Cannes Film Festival. He’s something else.”

“The King Loves” is the story of Wang Won (Im Siwan), who harbors extreme ambition and desire for conquest, and his best friend and bodyguard Wang Rin (Hong Jong Hyun), an upright man with a deep love and passion. When they both meet and fall in love with Eun San (YoonA), everything changes.

Watch the trailer for “The King Loves,” set to air on July 17: