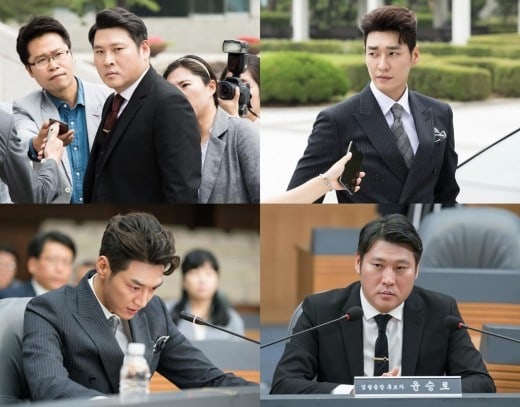 “Lookout” is keeping viewers on their toes. During the July 3 broadcast of the drama, Jang Do Han’s (Kim Young Kwang’s) shocking statement put everyone in a state of panic.

Jang Do Han confessed that he had been an onlooker at the scene of Cho Su Ji’s (Lee Si Young‘s) daughter Yoo Na’s (Ham Na Young’s) death. With this confession, Yoon Seung Ro’s (Choi Moo Sung’s) son Yoon Shi Wan’s (Park Solomon’s) murder was revealed, but he will now have to pay for his sin of being an onlooker at a crime scene.

On episodes 27 and 28, Jang Do Han will make his final attack on Yoon Seung Ro. However, he will also be heavily criticized as a prosecutor who was an onlooker at the scene of a child’s death.

In the first two stills (see featured image above), Jang Do Han and Yoon Seung Ro are heading to a hearing while being surrounded by reporters and flooded with questions. The second two stills show the two seated at the hearing. Yoon Seung Ro is a candidate for the position of Public Prosecutor General, and Jang Do Han is a witness. For some reason that has yet to be revealed, Jang Do Han has tears in his eyes. He is looking down, with his eyes red from crying.

The producers of “Lookout” stated, “The hearing will show twist after twist. Yoon Seung Ro attends the hearing confidently, and Jang Do Han is also preparing for his final attack. Please watch the broadcast to find out how the hearing will turn out.”