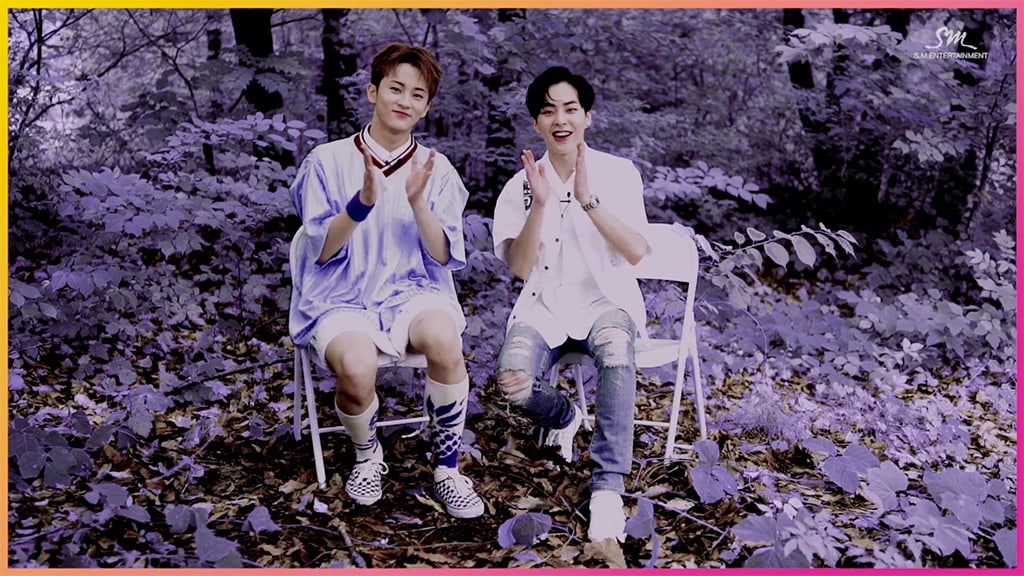 With just over a day left until the release of EXO Xiumin and NCT Mark’s highly anticipated collaboration track “Young & Free,” SM Entertainment released an interview video with the two artists on EXO’s V Live channel on July 5.

When asked about how the two artists first met, Mark said, “I think that even before we met the staff members at SM Entertainment must have told Xiumin about a trainee named Mark. At the time, however, I didn’t introduce myself as Mark and used my Korean name Minhyung. So when I met Xiumin, I introduced myself as Minhyung and he said, ‘Oh, so you’re Minhyung. But where’s Mark?'”

Xiumin gave his own take on how they first met and described how Mark was very short when they first met because he was very young. Xiumin said, “He was really a baby at the time [in comparison to now] and he was very cute…At the time, he wasn’t all that good at Korean so [he was careful with his pronunciation]. He was really lovable and I fell for Mark basically when I first met him. So after that, every time I saw Mark I wanted to look after him and take care of him.”

Mark agreed and said, “Xiumin would always buy me hats when I was a trainee. And between trainees, hats are very important.”

Xiumin laughed and said, “It’s true. If you wear a hat while you dance, you just seem different.”

Xiumin also gave Mark some advice as a senior in the entertainment industry and said, “As you continue down this career path, there will be difficult times and many obstacles along the way. I hope that you will be able to move past those things with a positive mindset, even if it is tiring.”

On how their collaboration came to be, Xiumin explained, “Well, first, this is something that I pushed for. I felt like this was something that wouldn’t happen if we delayed it more…Since I’ve really liked Mark ever since he was a trainee, I always thought it would be good for us to perform together on stage one day after he debuts.”

He also joked, “Since the title of the track is ‘Young & Free’ I felt like I should probably do this when I’m a day younger.”

EXO Xiumin and NCT Mark’s collaboration track “Young & Free” will be released on July 7 at 6 p.m. KST. Plus, the two will be performing their track together at the SMTOWN concert that will take place on July 8.

NCT
EXO
Xiumin
SMSTATION
Mark (NCT)
How does this article make you feel?