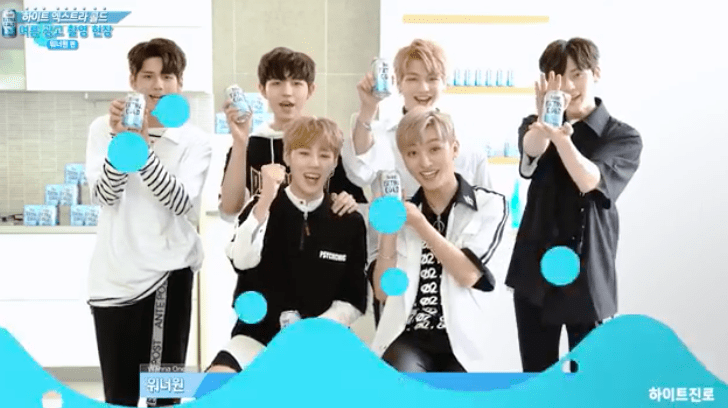 Wanna One Talks Beer, Snacks, And More During Interview For Hite Beer Commercial

As Wanna One slowly approaches their debut, the older members were recently featured in a behind-the-scenes interview with Hite Beer for their commercial!

During the interview, the members first talked about moments that made they crave an ice cold beer. Yoon Ji Sung responded, “For me, when I first found out that I was going to be a Wanna One member, that’s when I felt a craving for beer. I had an ice cold Hite.” Ha Sung Woon added, “You know how it’s been hot lately? I think it would be even more refreshing to drink a beer while watching a movie at home after taking a shower.”

Minhyun shared, “There are some days when singing practice goes really well. On those days, I feel like my vocal skills would really improve if I drink a beer after practice.” Kang Daniel commented, “Since summer is approaching, when it gets hot and humid during the evenings, I really crave Hite when I’m out for a walk alongside the Han river.”

Jaehwan then replied, “When I’m with my friends, I like to play soccer. When I drink Hite after I’m done, it tastes really good.” Ong Sung Woo also commented, “After doing popping choreography 825 times, I crave an ice cold Hite as I’m sweating.”

The members also shared their picks for the best side dishes to eat with beer. Yoon Ji Sung picked chicken while Ha Sung Woon playfully disagreed, choosing pizza and beer as a more trendy combination. Minhyun chose french fries, while Kang Daniel commented that watching a movie while eating popcorn and beer was his personal favorite. Kim Jae Hwan then stated that Hite beer went well with anything, while Ong Sung Woo shared that the crackers in his backpack were the best with Hite.

Finally, when the Wanna One members were asked to choose a beer fanatic among their group, the members chose Kim Jae Hwan and Kang Daniel.

Wanna One
Kang Daniel
Kim Jae Hwan
How does this article make you feel?