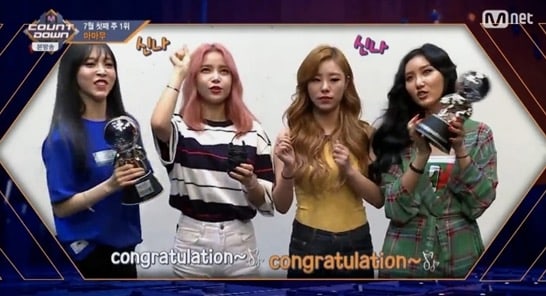 Watch: MAMAMOO Grabs 5th Win For “Yes I Am” On “M!Countdown,” Performances From KCON NY By TWICE, NCT 127, And More

MAMAMOO has taken another trophy for their hit “Yes I Am”!

July 6’s episode of “M!Countdown” featured performances from KCON NY, but also included the announcement of this week’s winner. MAMAMOO grabbed first place with “Yes I Am.” BLACKPINK came in No. 2 with “As If It’s Your Last,” Apink in third with “Five,” Kim Chungha in fourth with “Why Don’t You Know, and MONSTA X took the No. 5 spot with “Shine Forever.”

MAMAMOO celebrated in a video aired on “M!Countdown,” and Moonbyul said the win was all thanks to their fans for voting for them and supporting them. She also promised that they’ll show fans even better performances in the future.

Check them out below, including TWICE and SF9’s awesome special cover medleys!

CNBLUE – Intro and “Between Us”

Congratulations to MAMAMOO on another win!