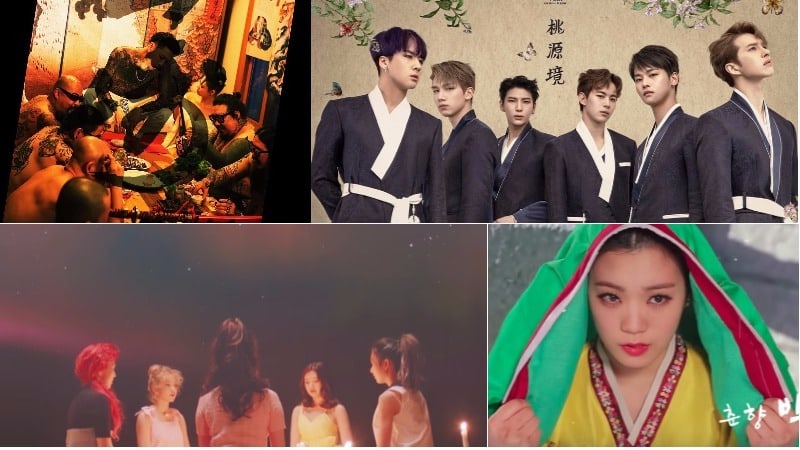 K-pop is known for incorporating really cool and different concepts; and one of these concepts include using Asian cultural elements and folklore in their music videos and music. Check out our list of six cool K-pop music videos that use these themes below!

VIXX (aka “Concept Kings”) is known for their unique concepts, and their latest one was no exception! This time they received inspiration from the tale of “Do Won Kyung,” or the Peach Blossom Land. This fable is about the discovery of a paradise where the inhabitants live in isolation from the rest of the world. VIXX portrays a slightly different twist to the tale, where the paradise they reference in both the music video and lyrics is a woman. Complimenting and enhancing the East Asian concept is the use of a gayageum (a Korean traditional instrument) in the track.

Cowritten by HyunA, CLC dropped this funky song earlier this year, semi-drawing on a supernatural creature called the dokkaebi, or a goblin. In Korean folklore, goblins are known to be mischievous tricksters and powerful beings. In the music video, the members of CLC can be seen using mallets and clubs, a reference to the goblin’s magical club, which is often used to summon gold and silver; the lyrics also reference this as well.

Lizzy of After School made her solo debut with the trot song “Not An Easy Girl.” The music video uses footage from the 1961 film “The Story of Chunhyang,” where Lizzy plays the protagonist Chunhyang. The well-known Korean folk tale is about the love story between Chunhyang and Mongryong.

Red Velvet – “One of These Nights”

The Korean title for this song is “July 7th,” which is when the Korean traditional festival Chilseok is celebrated (in the lunar calendar). According to the story, the heavenly king’s beautiful daughter Jiknyeo, who was very good at weaving clothes, fell in love with a handsome cattle herder named Gyeonwu, and they got married.

However, because they were so in love, they began to neglect their respective duties, and the king separated them, only allowing them to meet once a year. When that day came around, the couple found that they were unable to cross the Milky Way to meet one another. It is said that the crows and magpies were so moved by their love that they made a bridge so the two lovers could meet. After their short time together, the couple would cry when they realized it would be another year before they could see each other again; their tears were said to mark the start of the monsoon season in Korea.

See if you can spot the influences of the story in the music video!

The title “Arario” comes from the lyrics of “Arirang,” a famous Korean folk song. The music video fuses both traditional and contemporary elements of Korea. Some traditional cultural references include instruments like the gayageum and janggu, Korean traditional clothing, the lion dance, and pungmul (a folk music tradition that includes dancing and singing).

Bang Yong Guk is back with fierce and bloody “Yamazaki”! This music video is not for the faint of heart, but visually, it’s pretty sick. “Yamazaki” primarily draws on Japanese culture, most notably making references to the yakuza, but it also subtly incorporates traditional Korea in the architecture of the buildings. The lyrics also mix both Korean and Japanese, so I thought it was cool how the music video represented that as well.

Hey Soompiers, are there any other cool MVs that incorporate Asian cultural elements and folklore? Let us know in the comments below!

mayme22’s favorite Bible verses at the moment are Psalm 8:3-4