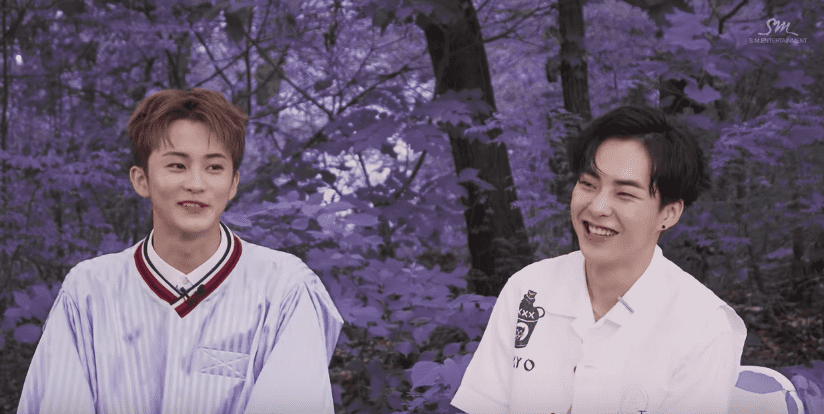 They began by answering a question that asked if there were any fun stories about something that may have happened during recording.

Mark revealed, “There was a time where we met at the recording studio. At that time, I was so embarrassed. I was so nervous while recording, I remember that I ended up drinking two bottles of water.”

See Also: EXO’s Xiumin And NCT’s Mark Talk About Their Friendship And How Their Collaboration Came About

In response, Xiumin couldn’t stop doting on his junior with compliments saying, “It was the first time that I saw him record, and I thought, ‘He’s not a little kid anymore.’ After seeing him sing and rap so charismatically, I instead told him, ‘Don’t be nervous in front of me. I’m more nervous than you.’ [I said this] because he’s so good at rapping…the best rapper.”

The adorable duo then named items they believed fit each other’s image well, with Xiumin choosing a golden microphone for Mark, and the NCT member choosing black sunglasses for his senior. They also shared where they would like to go on vacation together. Xiumin chose somewhere by the seaside, while Mark chose Vancouver, Canada.

Meanwhile, Xiumin and Mark will be performing their duet for the first time at the SMTOWN concert on July 8.

NCT
EXO
Xiumin
Mark (NCT)
How does this article make you feel?