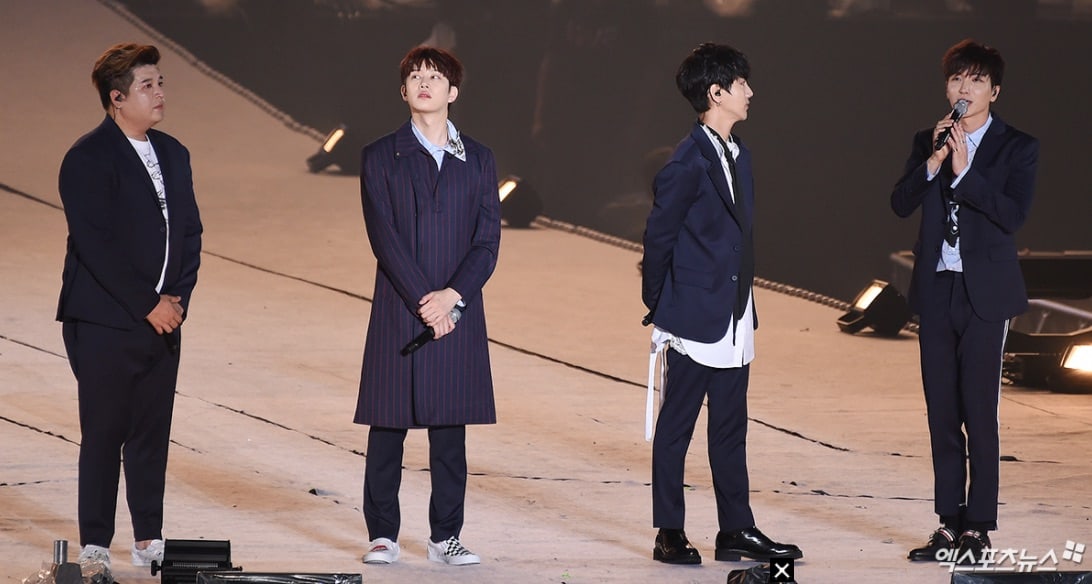 Super Junior’s SMTOWN LIVE performance on July 8 was an emotional moment for everyone as the members who attended the concert opened up about what’s been going on with the group lately.

Only four members were present as Kangin has been inactive since his DUI case in 2016, and Sungmin had to pull out due to the recent fan boycotts. Donghae, Choi Siwon, Eunhyuk, Ryeowook, and Kyuhyun are currently fulfilling their military service duties, meaning that only Leeteuk, Yesung, Shindong, and Kim Heechul were able to attend this year’s event.

The atmosphere was somber as Shindong opened up with, “Though we feel like our strength has been sapped out of us, seeing our fans gives us a lot of energy. We’re so grateful. I can’t really put into words how I’m feeling right now.”

Leeteuk added on by saying, “We debuted as the idol group with the most members in K-pop, but today, we’re standing on stage with the smallest number of members ever for a dance group in SM.” He also confessed, “My mind is as tangled and stifling as the weather today.”

Kim Heechul said, “To be honest, we thought a lot about whether we should even stand on stage today with just four of us. We believe that all our members should be with us.” Yesung also stated, “This feels different,” before shedding tears of gratitude for the fans who were there to support Super Junior.

As the leader of the group, Leeteuk tried to reassure fans and his fellow members by saying, “I’ve spent 18 years in SM. Super Junior is my life. There are no exits for me.”

The members also thanked Kyuhyun and Donghae, who attended the concert while on leave to show their support for their fellow Super Junior members.

Super Junior is set to make a comeback in October after Donghae, Choi Siwon, and Eunhyuk are discharged from the military this summer. The group was recently swept up in controversy following a fan boycott of member Sungmin, which resulted in the singer releasing an official apology and announcing that he will be withdrawing from Super Junior’s upcoming album.