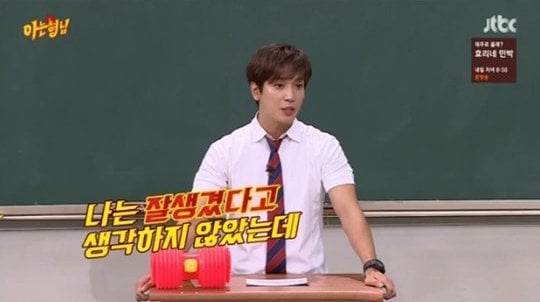 CNBLUE’s Jung Yong Hwa and Block B’s Zico recently appeared on the July 7 broadcast of JTBC’s “Ask Us Anything,” where they demonstrated their stellar variety skills.

During the show’s standard introductory Q&A corner, the CNBLUE member displayed confidence about his looks. When he said that he became known as someone horrible with directions because he would get distracted by his own reflection on store windows, the “Ask Us Anything” cast members couldn’t help but poke fun.

“I’m not scared of malicious online comments [about my actions],” Jung Yong Hwa confidently stated. He then revealed the hilarious reason why, saying, “I don’t go on web portal sites [like Naver and Nate]. I use that time to look at myself in the mirror instead.”

The “Ask Us Anything” members didn’t let up, as they asked, “Since when did you think you were good-looking?” To this, Jung Yong Hwa wittily replied, “I’ve never personally thought that I was good-looking, but people tell me I’ve become handsome.”

Meanwhile, the singer will be making a solo comeback, which is set to be released on July 19!

CNBLUE
Jung Yong Hwa
Ask Me Anything
How does this article make you feel?