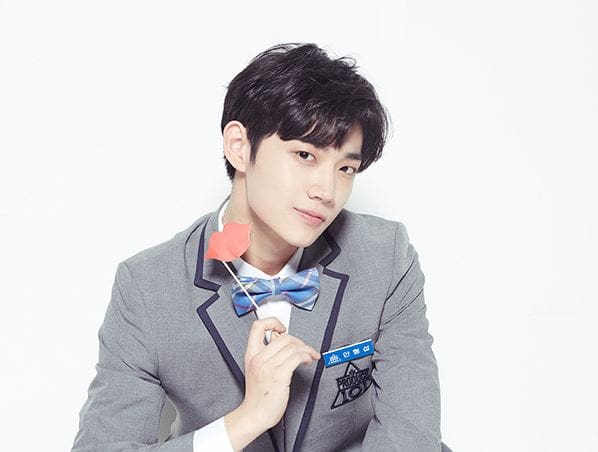 Yuehwa Entertainment trainee Ahn Hyeong Seop from “Produce 101 Season 2” captured the hearts of national producers with a sudden solo “Pick Me” performance and a cute rose performance in “Oh Little Girl.” In the beginning of the show, he went from D class to A class and took 16th place on the last episode.

After the show was over, Ahn Hyeong Seop said in an interview with Herald POP, “I think there isn’t anything I can do about the sadness that comes after I finish a performance. I did my best in every performance, so I don’t have any regrets. I’m just sad that I won’t have another chance to show the performances I practiced so hard for once the finale concert is over.”

He picked his most memorable stage as “Oh Little Girl,” saying, “PD Ahn Joon Young and producer Kiggen complimented me on my facial expressions when they saw my focus cam and rehearsal for ‘Oh Little Girl.’ Thanks to that, I was able to gain confidence. I thought about what I could do to show myself despite the little screen time I was given, and I decided to make my last center part the ‘killing part.’ I prepared a rose performance, which is something that hadn’t even been done in season one. I was thankful that many people gave a positive reaction to it.”

Though he seems like a natural at making cute facial expressions, the truth is that it came with practice. “Actually, up until last winter, I was told that I lacked in my facial expressions, so I looked at videos of I.O.I’s Choi Yoojung, VIXX’s N, and BTS’s Jimin to practice [the expressions] in increments of nanoseconds. Doing that naturally brought out various facial expressions,” and added, “I want to stand out more.”

In another interview with Biz Enter, Ahn Hyeong Seop chose BTS as his role model. He said, “When I’m most tired, I listen to ‘Never Mind’ and ‘Tomorrow.’ I was really touched by the performances [for those songs.] Once, I wanted to look cool, so I turned on a video of Jimin performing and did 200 push-ups. Ha-ha.”

Meanwhile, Ahn Hyeong Seop was sure that he wanted to become a singer ever since he was in middle school. He explained, “Whenever there was a festival at school, I always performed on stage. In my third year of middle school, I covered [SHINee] Taemin’s ‘Danger’ and experienced a lot of popularity. Thanks to that, I was able to lead a happy school life. After receiving glances of respect from my peers and juniors through my performances, I decided to become a singer.”

Produce 101 Season 2
Ahn Hyeong Seop
How does this article make you feel?