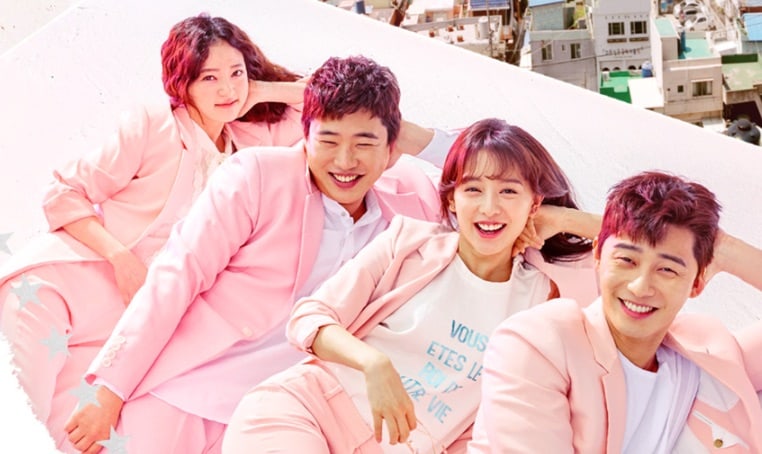 After 16 hours of watching “Fight My Way” and wondering if both couples would end up together, if they would achieve their dreams, if the characters would finally figure out who the landlady is when viewers figured it out in the first flashback with her, the wait is over. “Fight My Way” has ended, and as the cast prepares to enjoy a vacation together to celebrate their achievements with the drama, I’m left feeling unsatisfied and mournful. Pardon my morbid metaphor, but rather than file dramas away, I dig them a little hole in the “K-drama graveyard” where the great ones get a sunny, green spot with frequent flowers, and the disappointing ones end up in the back with the mud. “Fight My Way” may not end up in gross mud, but I certainly won’t be putting flowers by its spot.

Now, let’s break this review down. 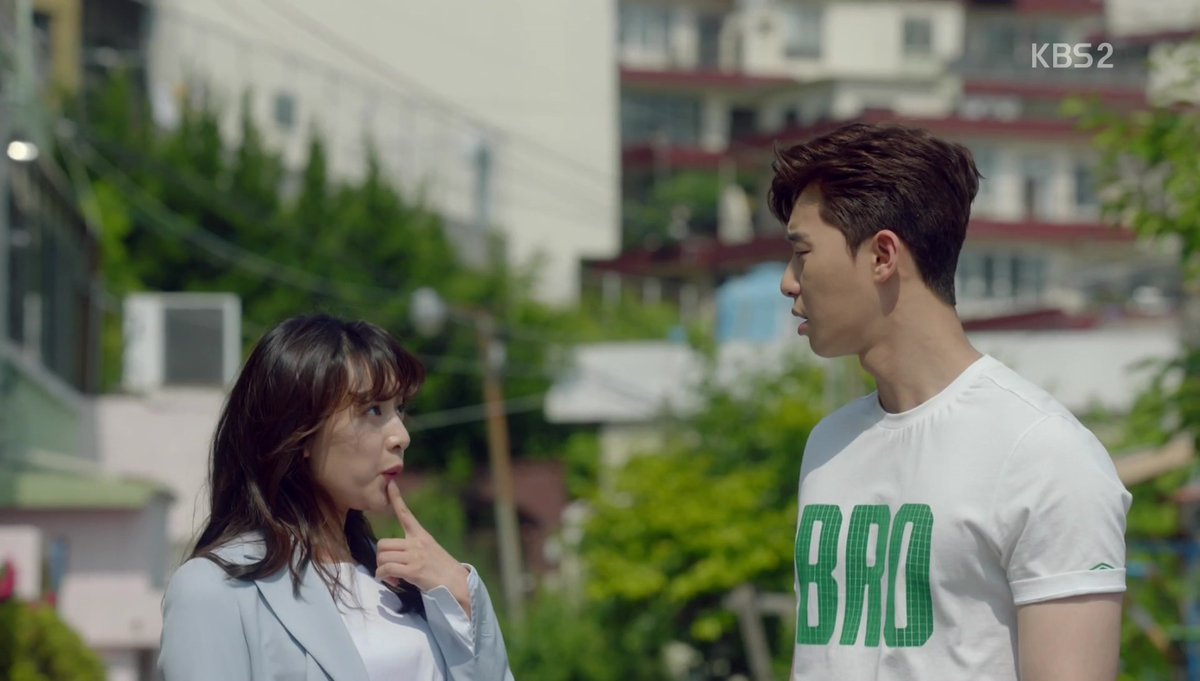 The drama is centered around two main couples. Couple 1: Joo Man and Seol Hee. Couple 2: Dong Man and Ae Ra. During the first couple of episodes, my feelings towards the main couples were best described by the following picture. 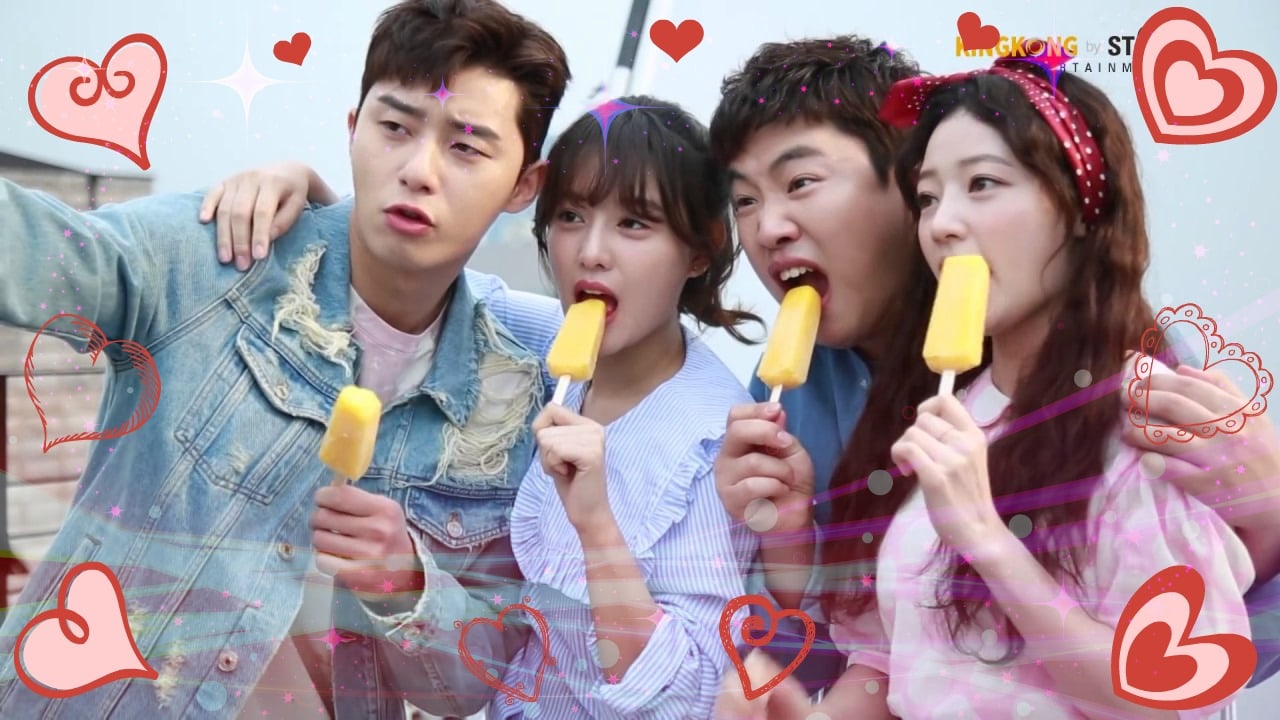 In the beginning of “Fight My Way,” Seol Hee/Joo Man are a couple of six years who are hiding their relationship in their work place. Joo Man obviously has some issues with Seol Hee’s tendency to go out of her way for others (which usually results in people taking advantage of her), while Seol Hee is the seemingly weak, “good” girl whose world revolves around her boyfriend. They’re a cute couple, but things get rough when a pretty intern starts making the moves on Joo Man and he becomes frustrated with how Seol Hee lets people take advantage of her. Ae Ra/Dong Man are pretty much the opposite. Childhood friends who know everything about each other, Ae Ra can send one text that she wants Dong Man to eat lunch with her and he goes running while she continues making sacrifices for her long-term boyfriend (who’s cheating on her). Meanwhile, Dong Man is just waking up to the idea that his feelings for Ae Ra might be more than just platonic.

Basically, one relationship has peaked while the other two characters are about to hit rock-bottom with only the other to hold onto and see where things go from there.

Several months later, my image of the two couples was like the next picture. 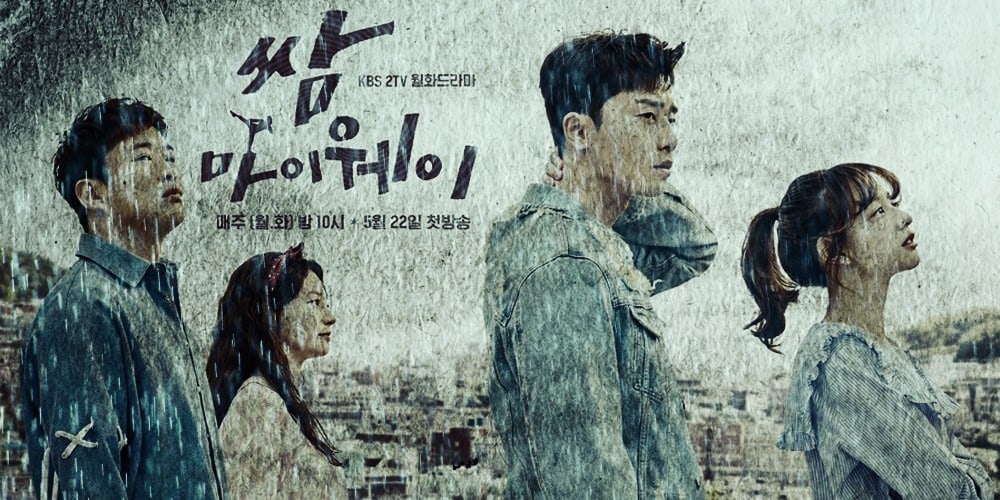 This next paragraph has some major spoilers, so if you haven’t seen the show, I recommend skipping it.

Both couples ending up together at the end did not make me any happier than I would be sad if they stayed broken up. Joo Man cheats on Seol Hee, and it magically only takes Seol Hee two months of breaking out on her own and finally finding something she is passionate about besides her boyfriend to take him back. Ae Ra leaves a bad job and decides to finally chase her dream of being an announcer, but when Dong Man tries to do the same, she protests and even tells him to choose between her and his dream. She expects him to support her, but never does the same for him; granted, she did go to his first match, but then she proceeded to cry and complain instead of congratulating him. This girl spent her entire childhood as the “neighborhood boss,” but can’t handle her boyfriend risking injury in a competitive sport? It only gets worse — not only does Dong Man tell her he’s choosing her, he goes behind her back and continues training, later (after he gets caught) saying he was going to tell her after the wedding. Killer way to start a marriage…

The ups-and-downs of couple-hood is not the only theme of this drama. Another major theme, the second half of the meaning of “Fight My Way,” involves chasing dreams. Seol Hee, Ae Ra, and Dong Man not only grew up together, but also put their dreams aside for various reasons. Seol Hee and Joo Man have yet to get married even though Seol Hee could want nothing less. Ae Ra spent years supporting her boyfriend while he studied for the civil-service exam instead of chasing after her dream of being an announcer. Dong Man was a competitive athlete before giving up his dream after an incident during high school that got him barred from competing in Taekwondo. I’m still not sure what Joo Man’s dream was… rather, I think his element was more “deciding what he wants out of life.”

Then they all hit rock-bottom. 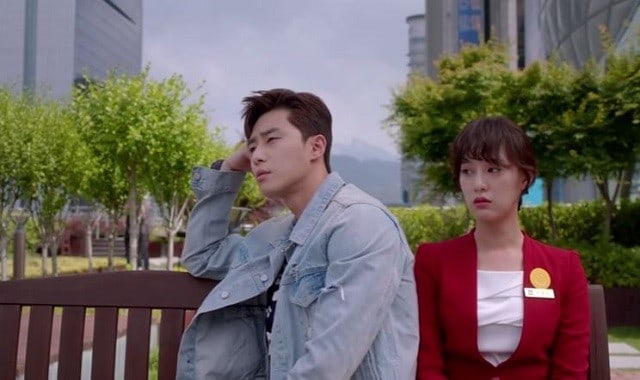 After their lives begin unraveling, they do what every drama character does in that situation: re-evaluate their lives and go after those dreams they pushed aside! This means finally getting to see Dong Man stand up for himself and join up with his old coach (one of my favorite characters!). Ae Ra takes on the entertainment world with her tough-girl, pulls-no-punches attitude. Seol Hee finally starts taking care of herself and thinking beyond her relationship, and Joo Man finally starts to appreciate the things he took for granted and decides to fight for his relationship. In other words, all four begin to “fight for their way.”

I enjoyed this process as much as I enjoyed watching Ae Ra and Dong Man start emphasizing the “love” part of their “love-hate” relationship. I especially love how the show approaches the idea that it’s never too late to go after your dream; Dong Man hasn’t trained in ten years and Ae Ra has age and lack of experience stacked against her.

This entire process gave me two of my favorite non-couple quotes in “Fight My Way”:

1. When Ae Ra is asked in an interview what she was doing instead of studying-abroad or interning and she answers realistically and honestly, “I was working.” You go, Ae Ra!

2. Towards the end when the drama fast-forwards two months, it’s said that Seol Hee found her own path “without a makeover or a prince.” The seemingly weakest character was the one who had her world completely fall apart and the one found an entirely new dream.

I was really satisfied with this portion of the drama.

One feature of “Fight My Way” that I really enjoyed was the use of flashbacks. Rather than two episodes of back-story, these moments were interspersed throughout the drama and strategically placed to connect plot-lines and current elements. When Dong Man’s ex-girlfriend shows up, they didn’t just have a voice explain why she was a problem-person, they showed it through flashbacks.

There were also flashbacks of the characters in high school, when we first learn about Ae Ra’s dream and Dong Man’s past as an athlete. These scenes were a lot of fun and explained a few elements in several episodes. 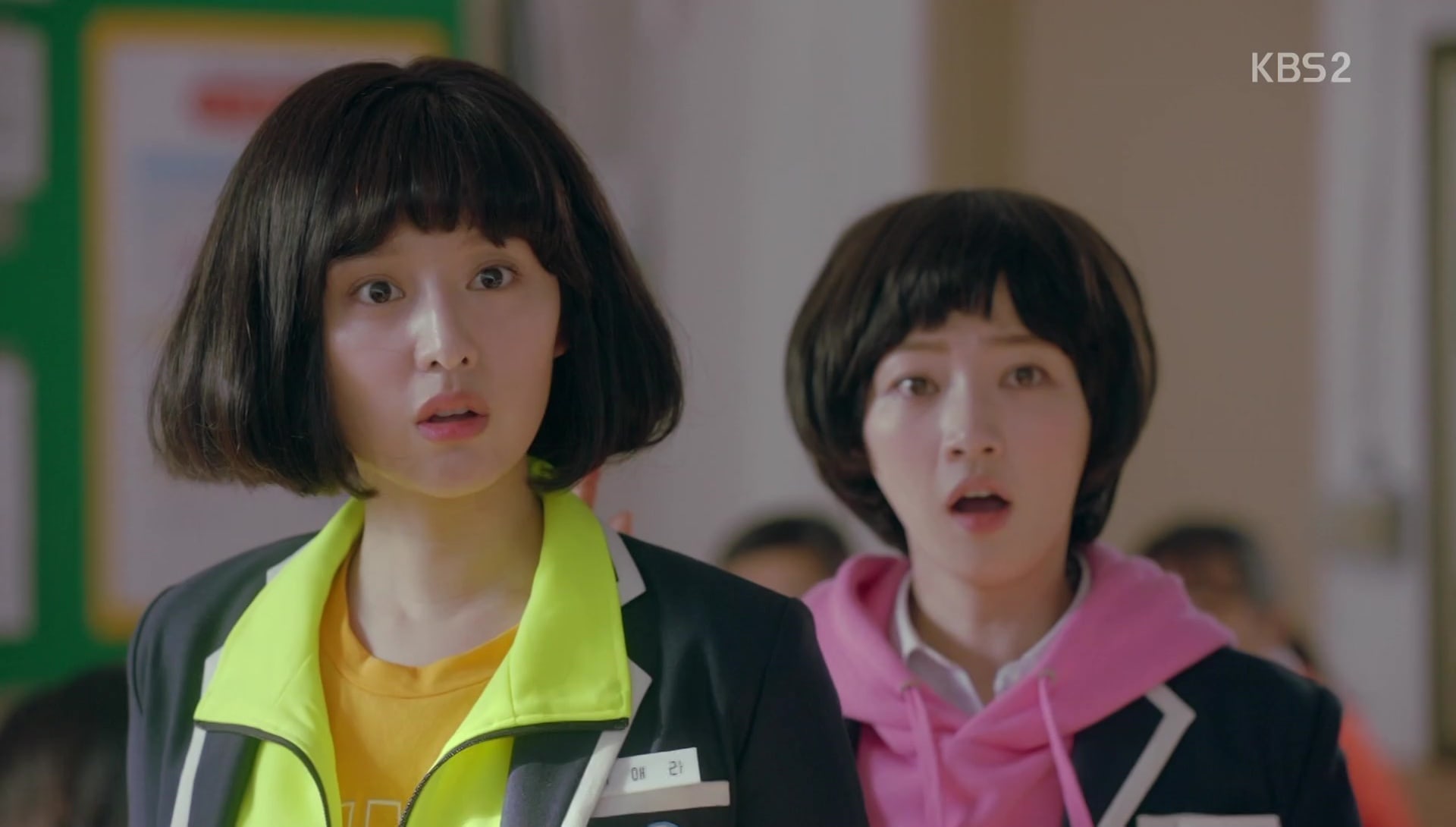 Also making appearances throughout the drama were the younger versions of Ae Ra, Dong Man, and Seol Hee, played by Jo Yeon Ho, Lee Han Seo, and Kim Ha Eun. Many of these scenes were amusing, especially the ones with little Ae Ra (I’m definitely a fan of this young actress). 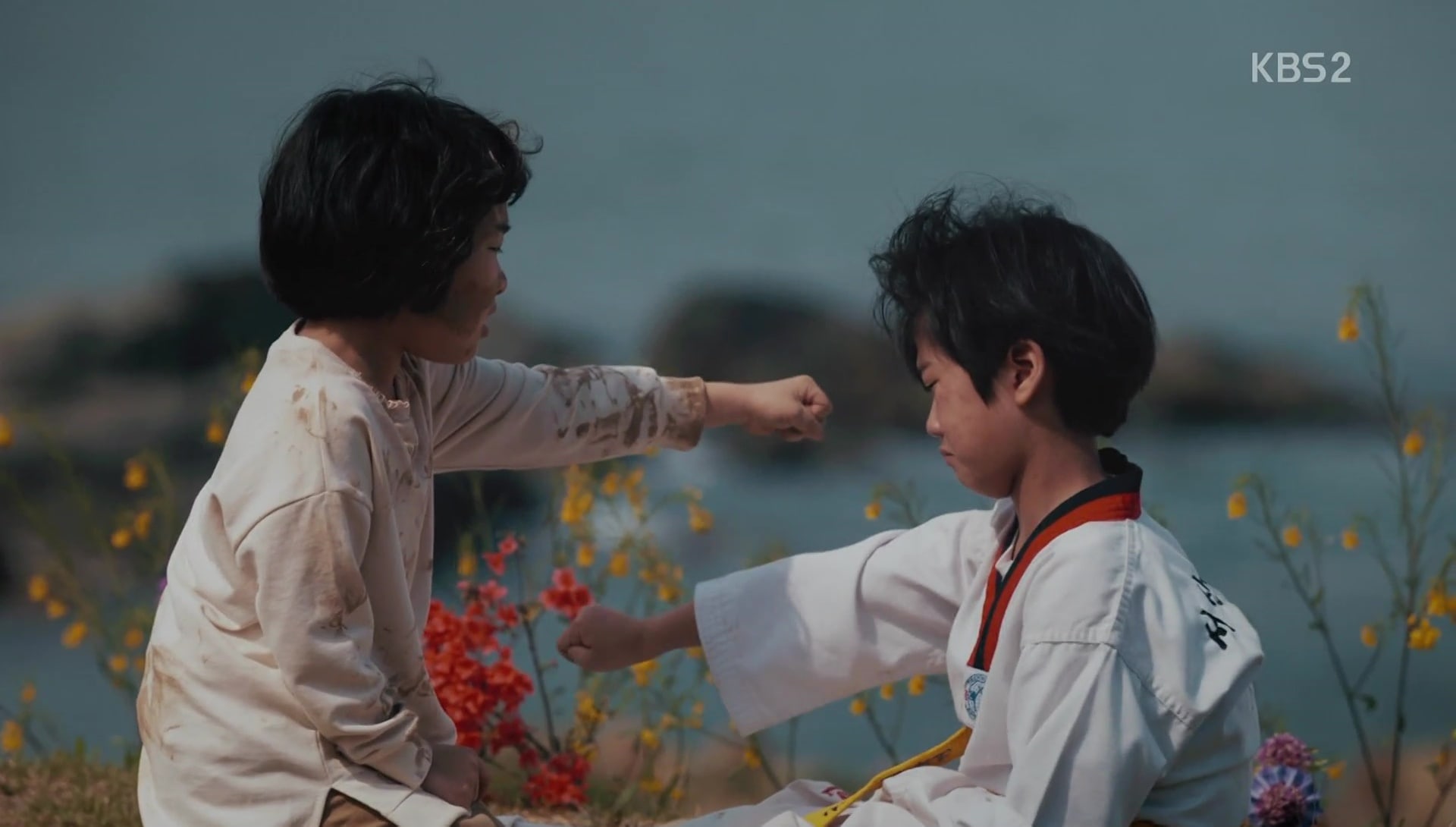 The flashbacks really added to the story and character development, and I thought they were used very appropriately. I actually wish more dramas used flashbacks in this way.

While I could spend a long time complaining about the ending of the drama and certain story-elements that occurred in the character relationships, I have few complaints about the characters themselves. The main characters were very strong, and the side-characters were also interesting and helped the story move forward. There is actually an extensive supporting cast that appears in all aspects of the main characters’ lives, from work to family. Though I find at least one or two of these characters completely unnecessary in certain dramas, I didn’t get that feeling at all during “Fight My Way.”

This is partially thanks to the casting. The parents, Lee Elijah as Dong Man’s ex-girlfriend and Ae Ra’s rival, Kim Kun Woo as his rival, Choi Woo Shik as the nerd-turned-jerk, and Kim Sung Oh as Dong Man’s coach and friend… pretty much all the side-characters were great, many of them experiencing their own growth during the drama. 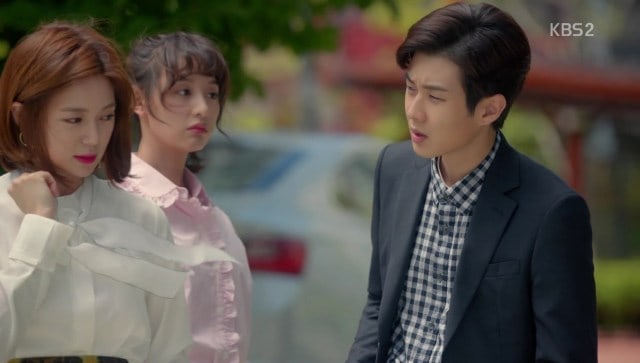 I enjoyed watching this drama right up until the last three episodes. A small confession though, I misread the episode count and thought it was 20 episodes, right up until I was told this was the last week. This definitely contributed to my disappointment in the ending; that last episode felt way too rushed. There was barely anything that left me satisfied except that Seol Hee’s plum sauce business was working well and Dong Man’s ex-girlfriend finally moved on with her life.

This probably isn’t a drama I would watch again, but it is one I would recommend to a friend who had a free Saturday and wanted to watch a drama in one go. Despite my disappointment in the ending and how both couples could’ve called it quits in the last thirty seconds and I would’ve just shrugged, it was overall a good drama. The whole cast was great and the story progression during the first… thirteen or so episodes really kept me intrigued. Ae Ra and Dong Man had decent chemistry, plus their love-hate relationship was a lot of fun to watch and was a good counter to the more serious relationship between Seol Hee and Joo Man.

Why couldn’t this drama have been two or four more episodes? I think they could’ve done it more justice had there been more time to develop the ending. 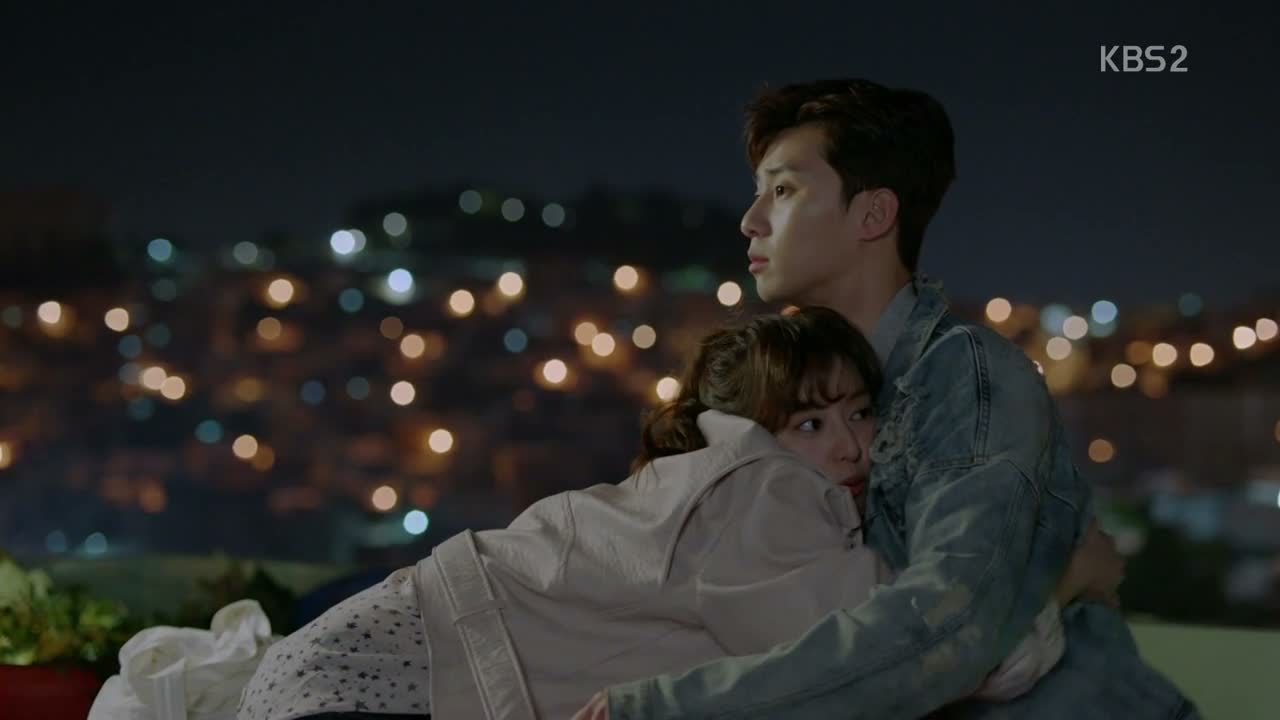 What are your thoughts? What did you enjoy most and least about this drama, and why would you recommend it to your friends to watch? Let us know in the comments below!

heytoto currently teaches ELL in Seoul, South Korea and can usually be found sipping a latte and fuming over the way some dramas end too soon.