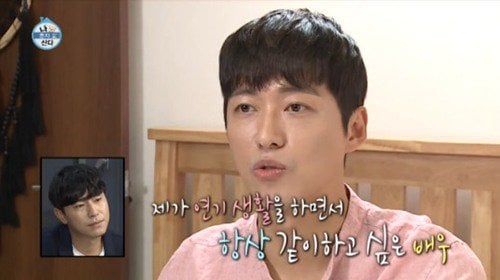 Namgoong Min recently paid a visit to his former “Remember” co-star Lee Shi Un in order to receive a rather special one-on-one lesson in dialect acting!

His house visit was shown on the July 14 episode of MBC’s “I Live Alone,” and the two actors displayed their friendly relationship throughout their segment.

Lee Shi Un turned out to be a strict teacher, as he directed Namgoong Min through the difficult tones and vocabulary that were associated with a regional dialect. When Namgoong Min finally nailed acting with a dialect, his colleague commented, “I think you’re doing really well.”

Even during a short snack break, the two actors showed a close camaraderie as they playfully joked around. “I usually don’t buy watermelon to eat. I purposely bought it just for you,” Lee Shi Un commented. On a similar humorous note, Namgoong Min replied, “I went to an traditional eastern doctor and they said that watermelon wasn’t good for me. But I’ll eat it just because you’re the one offering it to me.”

Later during an interview, Namgoong Min went into further detail about how much he respects his friend. He stated, “Shi Un is really good at acting. I was worried when I first [met him] because he looked really mischivious, but as we acted [together] I realized how sincere and humble he is about acting. He’s an actor that I always want to be with throughout my acting career.”

Sounds like they have a great friendship! Check out how they played contrasting, antagonistic roles in “Remember”!