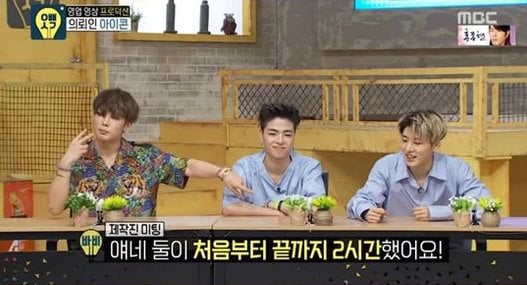 iKON Dishes On Ideal Types And Bobby Reveals His Girlfriend

iKON’s B.I., Koo Junhoe, and Bobby appeared as guests on the July 15 episode of “Brother’s Thoughts.”

During the show, Solbi revealed that the three members only talked about female celebrities during their two-hour meeting with the production staff. Bobby, however, hilariously threw B.I. and Koo Junhoe under the bus by saying it was the other two members who talked about them.

Once prompted whether he has a girlfriend, Bobby answered that he indeed has one, and it is his fans.

B.I. then revealed that his ideal type is Kim Ji Won from “Fight My Way,” and Koo Junhoe said he was a huge fan of actress Kim Tae Ri.

Koo Junhoe added that he wants to be someone who is popular amongst females. The studio erupted in laughter when he commented, “I believe I’m sexy.”

iKON
B.I.
Junhoe
Bobby
How does this article make you feel?