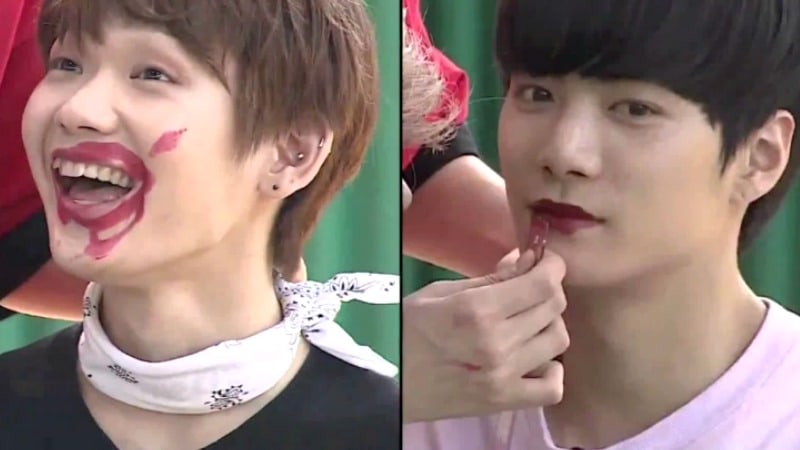 As they are all used to wearing makeup on a daily basis, you would think that male idols would have learned some tricks about eyeshadows and lipsticks over time. Yes, there are some idols who really wow us with their amazing skills and a professional attitude, but there are also many who are utterly clueless about makeup. Regardless of their skill level, we love them all anyway! So here are 10 moments when K-pop male idols took on the challenge of applying makeup!

If someone knows more about makeup than most of us, it’s definitely VIXX’s leader, N. His first appearance on “Lipstick Prince” was an instant success and he applied the lipstick and the tint perfectly on GFRIEND member Sowon’s lips. Let’s be real, we all want a personal makeup artist like Hakyeon.

B.A.P was a guest on the show “Idol Battle Likes,” where they were assigned to do a little makeup challenge: Youngjae and Daehyun were working on Zelo’s looks, while Himchan and MC YooA were concentrating on Jongup’s makeover. The results? Tons of glitter, wild pink lips, and two “beautiful” christmas angels.

30 seconds is enough to show us the difference between great and horrible makeup skills. In the clip below, Chanyeol presented the accurate way of putting on makeup, while Chen reminded us of our 5-year-old self trying out our mom’s lipstick in front of the mirror.

Makeup sessions with Johnny must be so much fun! He might not the best at doing flawless eyebrows, but it’s certain we would have the most enjoyable time with him. The guests on “Lipstick Prince” are the luckiest.

In the clip below, it was BamBam’s penalty to get kisses from the other six members and we finally got a chance to see how they apply their red lipsticks. First place definitely went to Jinyoung for his precision, but if there’s one thing we learned, it’s that we shouldn’t trust BamBam with lipstick!

During his solo broadcast on “INFINITE Showtime,” Sungjong showed us just how excellent he is with cartoon figure makeup. It’s hard to decide whether his own “Kung Fu Panda” face or his attempt to make Sungyeol into Dooly is better.

It was just completely adorable how flustered Block B’s maknae got when he finally met his ideal type, Sandara Park. He was too nervous and made some mistakes, but it was just so fantastic to see his dreams come true. And who wouldn’t be anxious doing the makeup of their crush?

Edward Avila invited the cheerful guys of HOTSHOT to do a little challenge: they had to apply idol/celebrity makeup on his face. Junhyuk’s version of Jeffree Star was simply hilarious, but Timoteo’s way of recreating Baekhyun’s face was the most outstanding.

“Produce 101 Season 2” was full of priceless variety segments and the “Lipstick Race” was among the most entertaining ones without a doubt. It’s amazing how somebody can manage to create a decent look with makeup after doing 10 elephant spins. Unfortunately, not all of them were this talented!

Another royalty from “Lipstick Prince” is our charismatic leader Shownu, aka Showminator. Wouldn’t we all want a makeup artist with huge biceps and an angelic smile? It’s the perfect combination! So it was only fair to be a tiny bit jealous of DIA’s Jung Chaeyeon when he had to chance to apply her makeup.

Be sure to also check out UP10TION’s makeup skills in the third episode of “UP10TION, Please!” below:

Hey Soompiers, what are your favorite makeup moments from male idols? Let us know in the comments below!